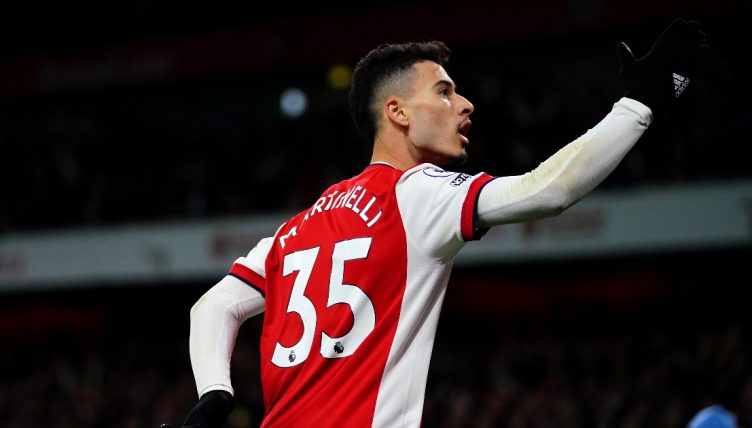 Arsenal forward Gabriel Martinelli is currently one of the rising stars in the Premier League.

He’s the name on every Arsenal fan’s lips and has stepped up to the plate in the absence of exiled star Pierre-Emerick Aubameyang.

Since his arrival from Ituano in Brazil’s fourth division in 2019, Martinelli has impressed the Arsenal fans with his sheer pace, skill and finishing ability.

The 20-year-old has drawn attention from fans and the media for his performances and mentality for playing with such composure and confidence at a young age in a foreign country and is one of the most exciting prospects in a young Arsenal team.

Here’s what some big names had to say about the youngster’s potential.

“We as Brazilians are very excited about him and his future. It is one thing to have the talent – but another at the age of 18 to have the confidence,” the former Brazil star told the Mirror in 2020.

“He reminds me of Ronaldo his first season in Europe he scored 30 goals and people were thinking: ‘Who is this 18-year-old Brazilian kid?’

“He wanted the ball, he would run at players, there was no fear no matter what players or team he was playing against – and I see that similar attitude in Martinelli.

“He just wants to be on the ball and score goals. Ronaldo went on to be the best player in the world – and that can also be the aim of Martinelli.”

The manager who brought Martinelli to England praised his ability as a winger after a Europa League match against Standard Liege in 2019.

“He played in this position with us and in every training, he showed us his hunger to be with us,” Emery said.

“In pre-season, he played in different positions, but above all, he preferred playing on the left wing. But also he played as a right-winger.”

“I used him as a striker because in Brazil he played this position. It’s not the best position for him, but the first [thought] in his mind is to help us.”

A night that Gabriel Martinelli will never forget ❤️

Watch out for the Kieran Tierney assist 🎯 pic.twitter.com/EOaHFPt5FC

“I watched Martinelli at Bournemouth away last season, him and [Bukayo] Saka together,” Ferdinand said on his YouTube channel in December 2020.

“And they have a link-up, they have a relationship that’s already there that I think in years to come will be a scary relationship. They work so well together, and [Kieran] Tierney as well on that left-hand side backing it up.

“But Martinelli, I have to say, is going to be a tremendous footballer, top player. He’s come back into this team and he’s showing what all the fuss was about before. He’s going to be a huge, huge player. Massive talent.”

His current manager praised his development after goals against West Ham and Leeds in December 2021, hinting that adding more composure into his game has benefitted him.

“It was one of the best in every aspect of the game,” Arteta said of Martinelli’s showing against West Ham.

“He was cramping again and he needs to mature in that sense but his overall understanding of the game is getting much better.

“He’s able to put some gears into his play. Sometimes he’s still doing everything at 100 miles per hour but the energy and quality he shows at times is top.”

“Sepp van den Berg as well, he played an incredible game,” Klopp said after Liverpool’s 5-5 draw with Arsenal in October 2019.

“I like him, when I’ve seen him play he looks lively,” Souness said on Sky Sports before Arsenal’s game against Leeds in December 2021. “He’s dangerous, he’s quick, enthusiastic.

“He’s a young man who I think will be a star in our football. Goalscorers like him are really hard to find. He’s got a bit of everything about his game and I really like him.”

“To be fair there are not many [players of his age that are this impressive],” Bellerin told Arsenal media after Martinelli’s equaliser against Chelsea in January 2020.

“A lot of people talk about his talent, but what people don’t see is that Gabi is a professional. He turns up early every day. He does all the stuff and everything anyone asks him to do. He is the first player to press and the last player to leave everything on the pitch.

“The goals are just a plus. He helps us in every single way and the thing that everyone needs to praise him for his attitude. That is what makes him a player.

“I think he is obviously really young in his career – so many things can happen – but if he keeps his head where it is right now, he is going to go really far for sure.”

“With time, he will get even better. He looks very good to me. What I like is that he can link up play. He can hold the ball. He has a nose for space so he knows where to go. He can score, and if you have all that, he can become a top player.”

“He’s very special and he’s a lovely boy as well,” Ljungberg told BT Sport in May 2021. “You hear how he speaks, of course he’s disappointed he’s not starting, it’s been a while.

“He does so well but he’s saying I’m always ready when he wants me and it’s a dream for a manager to have.

“He has that instinct, he just gets there and he reads it so well. It’s not what you learn in a book. He has that feeling and he will score a lot of goals in his career.”

“He [Martinelli] has been curtailed by injuries but he’s back,” Wright told Premier League Productions after Arsenal’s win over West Ham in December 2021.

“When he gets into this situation [his goal] that where he’s getting that ball past into that space and you have a forward that’s willing to run.

“Then you have a willing runner, great composure and a great finish. You are hoping he can continue to do that because he is the kind of person that if there is going to be an heir to the throne, in respect of Aubameyang, then this guy can do it.”

Lacazette with the assist, Gabriel Martinelli with the finish 🙌

Perfect placement to give the Gunners the lead vs West Ham! pic.twitter.com/nz2Yy57dti

“Obviously we have Bukayo [Saka] and Emile [Smith Rowe] and they are already playing so much,” he told the Premier League in March 2021 when asked which young Gunner has impressed him the most.

“But I think one guy who hasn’t played that much lately is Gabi Martinelli. He’s such a big talent, you see him in training every day and you see it. He’s a really talented player with a lot of qualities.

“So I think definitely he’s one for the future. And he’s so young still, so I will go with him.”

“I think he is a great player,” Tomiyasu told Arsenal’s Youtube Channel in December 2021. “I made an assist for him against Newcastle, I thought it would be too long but he was fast and he had the technique to score.”

How’s this for a finish from Martinelli 👌🏻

Arsenal lead 2-0 against Newcastle with 10 minutes to go…pic.twitter.com/dw7ATGvdLv

“Gabi’s gonna be a superstar,” Aubameyang tweeted after Martinelli scored against Sheffield United in January 2020. “Not because of the goal because of the attitude, energy and mindset.”

“This lad is outstanding, Martinelli. I’ve always been a fan of his,” Cole told BT Sport after Arsenal beat West Ham 2-0 in December 2021. “He reminds me of a young Sergio Aguero, who is busy, just like Alexis Sanchez.”

“He’s the revelation. I think he’ll confirm this and will be a very important player for the club,” the former Arsenal winger stated to Ouest-France in February 2020.

“He’s not going anywhere. He’s part of the players who have a real potential, on who we will lean for years to come. It’s important to have players like him.”