The 10 managers with the most trophies since 2016: Zidane, Klopp… 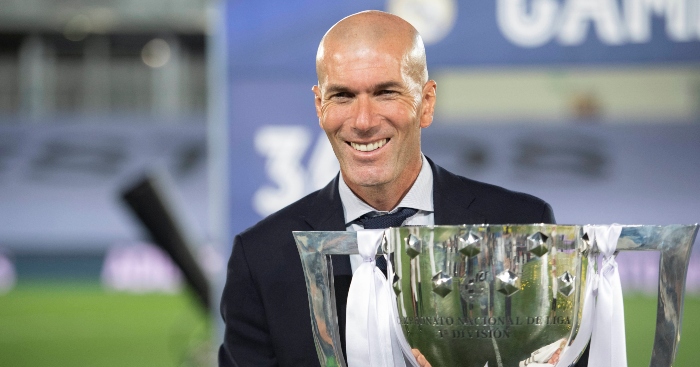 Zinedine Zidane has an incredible trophy haul as Real Madrid boss – but how does he compare to other managers in Europe’s top five leagues?

Zidane is widely regarded as one of greatest players of all time and is now having a successful career in the Madrid dugout.

We’ve looked at the managers who have won the most trophies since the 48-year-old entered senior management at the start of 2016.

Anceotti is one the most successful managers of all time and won the Bundesliga title and two DFL Supercups while in charge of Bayern Munich.

The Italian failed to add to his trophy cabinet during his 18 months at Napoli and was appointed manager of Everton in December 2019.

Mourinho won the Community Shield, League Cup and Europa League in his debut season at Manchester United, but he was sacked in December 2018.

The 57-year-old took the reins at Tottenham in November 2019 and will be hoping to win their first trophy since 2008 next season.

He won the Bundesliga, DFB-Pokal and DFL-Supercup at the Allianz Arena but was sacked after just 18 months in charge.

Enrique left his role as Barcelona manager in 2017 and won La Liga, the Supercopa de Espana and two Copa del Rey titles during his final 18 months in charge.

The 50-year-old was named coach of the Spanish national team in 2018 and is yet to win a trophy on the international stage.

Klopp was appointed as Liverpool manager in October 2015 and had to wait nearly four years for his first trophy with the club.

After winning the Champions League in 2019, the 53-year-old added the UEFA Super Cup, FIFA Club World Cup and Premier League to his CV in 2019-20.

Tuchel replaced Klopp at Borussia Dortmund in 2015 and won the 2016-17 DFB Pokal in his final game in charge.

He took a year out of management before taking the Paris Saint-Germain job in 2018, and he has won two Ligue 1 titles and two Trophee des Champions with the French side.

Emery won the Europa League for a third time with Sevilla in 2016 before succeeding Laurent Blanc at Paris Saint-Germain.

The Spaniard failed to win a trophy during his 18 months in charge at Arsenal and was sacked in November 2019.

The Italian has been without a team since leaving the Serie A side at the end of the 2018-19 season.

Guardiola won the Bundesliga and the DFK Pokal during his final year in charge at Bayern Munich before moving to Manchester City in 2016.

After a trophyless first season at the Etihad, he has since won two Premier League titles, three League Cups, an FA Cup and two Community Shields.

Zidane took his first steps into management with Real Madrid Castilla and eventually replaced Rafael Benitez as the first-team manager in January 2016.