The 12 most expensive Championship players ever: Neves, Carvalho, Ritchie… 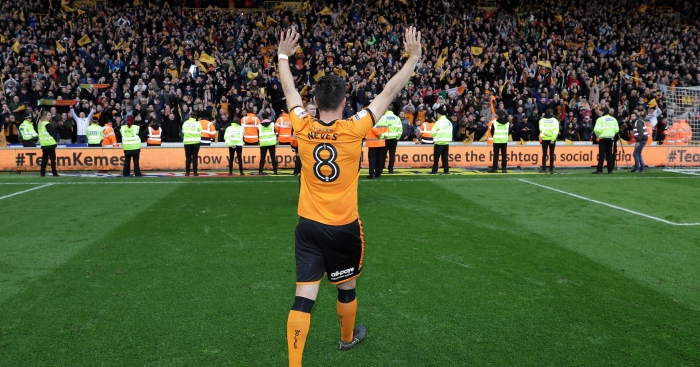 It still raises eyebrows among the less well-off members of the Championship – but a dozen players have now been signed for more than £10million in the second tier.

Generally it is the clubs recently relegated from the Premier League, armed with their parachute payments, who spend the biggest fees in a bid to earn an instant return.

There are also those backed by new money aiming to make it to the top flight – but big money means big pressure, and the Championship’s most expensive signings have endured somewhat mixed success.

In Newcastle’s bid to return to the Premier League immediately after relegation in 2016, they paid Crystal Palace £10million for Gayle after he finished top scorer for the club in each of his three seasons at Selhurst Park.

The forward rattled 23 goals in 34 games as Newcastle won the Championship, but he scored only six in the Premier League the following season and so was loaned out to West Brom back in the second tier.

Where he once again scored a load of goals, of course.

Rhodes became the most expensive player outside of the top flight when he joined Blackburn Rovers for £8million in 2012, and his value has increased a further £1million with each move since, signing for Middlesbrough for £9million before they shipped him to Sheffield Wednesday for an eight-figure sum.

However, since leaving Blackburn he has failed to live up to his previous high standards for goalscoring, netting just 14 times in 75 Championship games for Boro and Wednesday, and in summer 2018 he was loaned to Norwich City for the season.

A little like Gayle and Rhodes, Ince seems to have established himself as a player who’ll consistently be one of the best in the Championship but fail to make much of an impression if stepping up to the Premier League.

Which was enough to convince Stoke to pay an initial £10million to sign him from Huddersfield Town in 2018 in preparation for their first season in the second tier since 2007-08.

One year after joining Bristol City for just £2million, Roberto Di Matteo splashed £11million on Kodjia, with add-ons meaning the fee could rise to £15million.

He equalled his 19-goal City tally in his debut season at Villa, despite making nine fewer appearances, but his 2017-18 campaign was decimated by injury and his 2018-19 campaign much less productive than his first two in the Championship.

Ritchie caused the raising of plenty of eyebrows when he swapped Premier League Bournemouth for recently-relegated Newcastle in 2016.

It was just over a year after his 15 goals had helped Eddie Howe’s side to the Championship title, and he netted 16 in all competitions as Rafa Benitez’s Magpies secured an immediate return to the top flight.

Ritchie then put in a string of impressive performances and bagged match-winners against Arsenal, Manchester United and Southampton to help Newcastle to a top-half finish in their first season back in the Premier League.

Stoke were no doubt hoping to emulate Newcastle’s feat in bouncing straight back to the Premier League following their relegation in 2018, splashing out £22million on Ince and Afobe alone.

The two proven Championship performers predictably scored goals for the Potters, but things did not quite turn out as well as they had for Newcastle.

Not content with the £11million the club had spent on Kodjia at the start of the season, new Villa boss Steve Bruce splashed out another £12million to sign Hogan from Brentford in January 2017.

The former Rochdale and Halifax Town forward had scored 21 times in 33 Championship appearances for the Bees but did not have as much impact at Villa Park and was loaned out to Sheffeld United in January 2019.

Two years after joining Fulham for £11million, Di Matteo continued his spending spree at Villa by adding £1million to McCormack’s fee after he had won two successive Player of the Year awards at Craven Cottage, scoring 42 goals in two seasons.

He failed to have the same impact at struggling Villa before falling out with Bruce having reportedly missed training on numerous occasions. He has since been loaned out to four separate clubs.

Ahead of the 2018 play-off final against McCormack’s former club Fulham, Bruce revealed that the attacker would receive a £1million pay rise if his side were promoted to the Premier League, despite the Scot failing to register a single Championship appearance all season.

Wolves’ first signing under their new owners was Costa, who joined initially on loan from Benfica in the summer of 2016.

The Fosun Group had paid a club record fee of £7million to bring Ivan Cavaleiro to the club but smashed that the following January with the signing of Costa on a permanent deal in January 2017.

Forest no doubt had Wolves’ success on their minds when they too smashed their record transfer fee to sign Portugal under-21 midfielder Carvalho ahead of the 2018-19 campaign.

Unlike Wolves, however, Forest did not quite run away with the title.

Forest’s previous record transfer was £5.5million, paid to Peterborough for the services of Assombalonga in 2014, three years before making a £10million profit as Middlesbrough spent up their cash received for Rhodes in one big purchase.

After scoring 30 in 65 for Forest, Assombalonga hit 15 goals in his first season at Middlesbrough as they reached the play-off semi-finals, although 11 of those came in the opening 18 games before he ended a career-worst 14-game run without a goal.

Wolves pulled off a huge transfer coup in the summer of 2017 with the signing of Porto’s 20-year-old full international Neves, who arrived for a Championship record fee reported to be £15.8million.

Neves’ passing range and incredible ability at scoring long-range goals unsurprisingly proved rather useful as Wolves won the Championship and earned promotion to the Premier League.