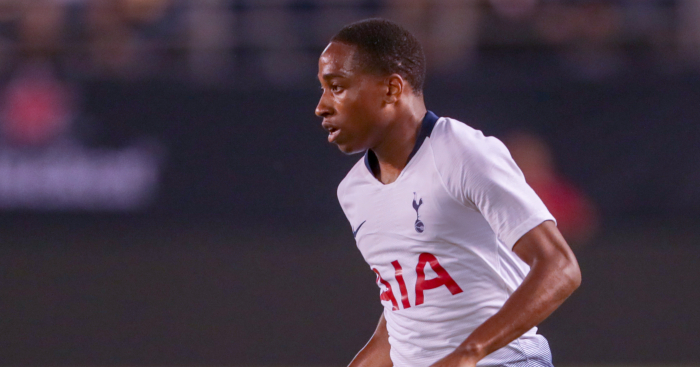 Mauricio Pochettino challenged 10 Tottenham youngsters to push their case for first-team football ahead of the club’s pre-season tour of the USA.

Spurs beat Roma 4-1, AC Milan 1-0 and lost to Barcelona on penalties across the Atlantic, with 10 players aged 21 or under in their 25-man squad.

“We have three very good tests and more than results, it’s about how we are going to approach the games and both collective and individual performances.

“It’s about players showing they are in condition to fight for a place in the starting 11 and to share that with our fans in America will be fantastic.”

With just one pre-season remaining for Spurs, we’ve looked at the 10 players involved to see how they’ve fared so far – and whether they could be pushing for first-team football in 2018-19.

Amos, a 21-year-old defensive midfielder who impressed on loan at Stevenage last term, has been one of the big winners from Tottenham’s tour, starting all three matches.

Following the win over Roma, in which his deflected cross led to Fernando Llorente’s opener, Pochettino praised the youngster, saying: “Luke has a lot of quality. He needs to work hard to find the opportunity to play. But I am so proud of his performance and that of all our midfielders.”

And after the win over Milan, Pochettino even hinted that he could hand Amos his Premier League bow in Spurs’ opening fixture against Newcastle.

“Football is about energy, about desire, about respect for yourself and your team-mates, being professional,” the Spurs boss said. “Of course, Luke is a good example.

“He played three games of 90 minutes. At 21, maybe he’s not so young and maybe he doesn’t have Premier League experience.

“But his performances in the three tour games showed it’s not a problem to put him in to play. Maybe he’s going to play ahead of some senior players.”

Spurs have thoroughly dominated central midfield tonight and credit is due to Luke Amos (21).

Sitting in front of the defense, Amos has zipped through midfield closing down attackers.

On the ball, he’s kept his cool under pressure and knows when to drive forward.

After travelling to the US with the senior squad last summer, Austin has again had to play the role of onlooker as Michel Vorm and Paulo Gazzaniga have shared goalkeeping duties.

The stopper is still only 19 and has been called up by both the England and USA youth set-ups.

One of the few youngsters involved who have enjoyed a taste of competitive first-team action with Spurs, Carter-Vickers made four appearances for the club in 2016-17 before spending time on loan at Sheffield United and Ipswich Town last term.

The defender, who has already made his debut for the senior USA side, played the full match against both Roma and Barcelona, alongside a late cameo against Milan, and is tageting a place in Spurs starting XI rather than another loan move.

“I’ve come back to Spurs this pre-season and I’ve been focused on working hard in every training session and trying to impress the manager as much as I can,” he told The Guardian. “I’m at that age now where I want to be playing games.

“I’ve just signed again [a new contract] at Tottenham, so I’m aiming to get into that starting XI. I feel if you impress the manager here and you do the right things on the training pitch, he’ll give you that opportunity.”

Capable of playing at centre-back or right-back, and with a brother who is part of Arsenal’s academy, Eyoma missed out entirely against Roma and Barcelona.

However, the 18-year-old started in the centre of defence against Milan as Tottenham kept their first clean sheet of the tour.

Eyoma & Sanchez were quality tonight, comfortable & cool under pressure for the entirety of the game. I expect big things from Eyoma #COYS #BOSS

A full Cyprus international, Gerogiou made his senior Tottenham debut against his home country’s APOEL Nicosia last season, appearing off the bench twice in America before earning a start against Milan.

The 21-year-old, who can operate either at left-back or on the left-wing, missed the decisive penalty against Barcelona but earned plenty of praise from supporters for his display in defence in the final fixture.

Best known for being strangled by Adam Lallana in an Under-23 fixture last season, Marsh replaced Amos against Roma but failed to appear against Barcelona.

The 19-year-old, who was among six academy graduates to start against Milan, is generally used as a holding midfielder but can also be deployed in defence.

Lot of double-barrelled names among the Tottenham youth set-up, isn’t there?

Anyway, Oakley-Boothe had to return to London without appearing due to an injury.

Oh, and he’s an 18-year-old midfielder. And he made his senior debut for Spurs against Barnsley in the League Cup last term.

Born on Valentine’s Day, too.

What more do you want?

‘What should Tottenham do with Oliver Skipp?’ reads one headline as we Google the 17-year-old midfielder’s name.

If the answer isn’t ‘make him captain’ then there really is no point in all of this.

Future skipper Skipp was given half an hour against Roma and replaced Fernando Llorente at half-time against Barcelona before being handed a first start against Milan, and Spurs supporters are getting very excited.

Oliver Skipp has a great future. Quick through the middle, excellent touch, no fear in possession and tenacious. Poch won’t be scared to play him if he keeps impressing on this tour

Keep it up son

The final player with first-team experience, the 21-year-old started all three fixtures, switching from left-back to the right side for the final match against Milan and winning Man of the Match.

Walker-Peters signed a new three-year deal in May but has been mooted for a loan move this season by Football London.

A 19-year-old goalkeeper, Whiteman has had to watch on from the bench in America, as he has done for the first-team on a couple of occasions in the last two years.