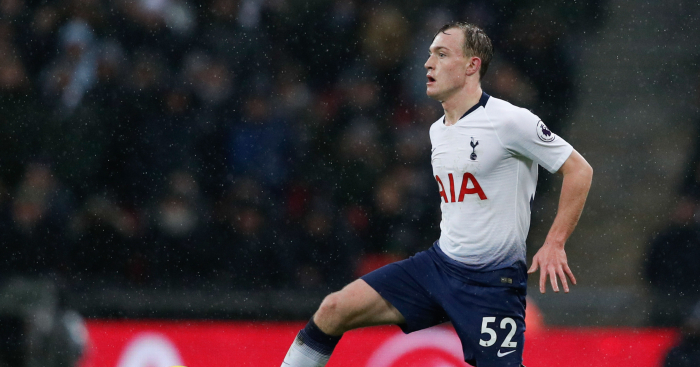 Tottenham infamously failed to sign a single player in the summer – but that has opened the door for a number of young players to make their case for a first-team spot.

Ahead of Spurs’ pre-season tour of the USA, manager Mauricio Pochettino challenged 10 youngsters who travelled with the senior squad to make the most of their opportunity to make an impression.

We’ve looked at how those 10 players have developed since that trip across the Atlantic.

Spurs fans were getting excited about Skipp’s potential after the midfielder appeared against Roma, Barcelona and Milan in the summer.

And the 18-year-old has since made his first senior start for the club in the 1-0 victory against Burnley, having made his debut in the League Cup victory over West Ham early in the season.

“Fantastic, fantastic,” Pochettino gushed after Skipp’s display against Burnley. “I think he played like a 30-year-old man.

“He was so relaxed, trying to play forward and trying to give the team what the team needs, plenty of energy, full energy, I am so proud of him. I think everyone is proud of him.

“He is only 18-years-old and I think it was fantastic. Now I think it is going to be easy for him because always the debut you are nervous.

“I remember when it was my first game and I said to him, ‘You look so relaxed. When I was 17, going to play I was so nervous’. I said, ‘That is the difference between a player going to be a top player and a player who was going to be a normal player like me.’”

If Spurs don’t make him captain at some point we give up.

🗣️ "When I saw my name on the teamsheet, I was just delighted!"

Amos was one of the breakout stars of Spurs’ tour to the US, starting all three matches, with Pochettino suggesting the midfielder was part of his first-team plans for 2018-19.

That has transpired into a solitary two-minute cameo against Newcastle United on the opening day of the season before the 21-year-old suffered a serious knee injury in a reserve team outing, meaning he is expected to miss the rest of the campaign.

After starting all three tour games, appearing at both right-back and left-back and winning Man of the Match against Milan, reports suggested Walker-Peters could be sent out on loan this season.

However, the 21-year-old has stayed put in north London so far, signing a new five-year deal in December, but has made just one appearance in each of the Premier League, League Cup and Champions League.

Thrown into the starting XI for the crucial Champions League clash with Barcelona, the England youth international was at fault for Ousmane Dembele’s early opener but otherwise acquitted himself admirably.

The display clearly impressed Pochettino, who has since ruled out the possibility of Walker-Peters departing on loan in January, describing the defender as one of his “best options”.

Another player with senior experience with Spurs, Carter-Vickers spent last term on loan at Sheffield United and Ipswich Town and was ultimately sent out on loan again for the new season, joining Swansea City.

The move has not quite gone to plan, however, with the centre-back making just four starts in the Championship, with a further four appearances coming from the bench.

Saw Cameron Carter-Vickers in Nandos earlier. He came in to collect a take away but then he was stopped outside talking to a homeless old man for ages. Spent a lot of time with him checking if he was alright. Footballers sometimes get a bad rap, but this was lovely to see. #Swans

Marsh’ most famous moment in a Tottenham shirt to date came in the form of being strangled by Adam Lallana in an Under-23 fixture.

He has at least featured in three Checkatrade Trophy games this term, and recently trained with the first-team with Spurs facing something of an injury crisis in midfield.

The Cyprus international, 21, made his Tottenham debut in the Champions League last term, but that remains his only first-team appearance to date.

An injury has kept Georgiou sidelined at the start of the campaign, with the winger only returning to Under-23 action in December.

Eyoma’s brother, AJ, was a member of Arsenal’s academy and joined Derby County on a one-year deal in the summer.

Both players continue to await their senior debuts, but TJ impressed when lining up in central defence against Milan as Spurs kept their only clean sheet of the tour.

The 18-year-old can operate at centre-back and right-back, and has been a regular for the Under-23s this term.

Whatever happens next these young lads have already made my day. A deserved 2-0 win at Barca to qualify for the knockouts of the UEFA Youth League. Had me completely absorbed and invested in them. TJ Eyoma at centre half was the pick of the bunch. #COYS pic.twitter.com/8Xor2kPuQ5

One of two goalkeepers to travel to America but fail to play, Austin has been called up by both the England and US youth set-ups.

The 19-year-old is another youngster to be given the honour of appearing in the Checkatrade Trophy this term.

The second stopper to be forced to watch on in America, Whiteman has previously been named on the bench for Tottenham’s senior side but has yet to make it onto the pitch.

At least he’s been able to share Checkatrade Trophy duties with Austin though.

Alfie Whiteman on the bench for Spurs, that’s a Football Manager re-gen goalkeeper right there.

Lots of double-barrelled names among the Tottenham youth set-up, aren’t there?

Anyway, Oakley-Boothe had to return to London in the summer without appearing in the US due to an injury.

Oh, and he’s an 18-year-old midfielder. And he made his senior debut for Spurs against Barnsley in the League Cup last term.

Born on Valentine’s Day, too.

What more do you want?