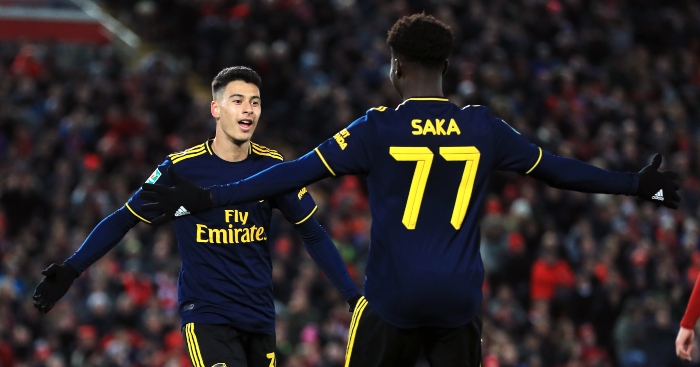 While experience can be invaluable on a football pitch, there’s nothing quite like seeing a young player burst onto the scene.

Manchester United and Arsenal currently have some of the best teenagers in the world on their books and they’ve made an immediate impact in the first team.

We’ve looked at the 10 teenagers from Europe’s top five leagues who’ve scored the most goals in all competitions this season.

Adli came through the academy at PSG, but made just one senior appearance for the club before joining fellow Ligue 1 side Bordeaux in 2019.

The 19-year-old became the first player born in the 2000s to score a brace in Ligue 1 and has three goals and three assists in all competitions this season.

Hudson-Odoi suffered a ruptured achilles in April 2019 and struggled to recapture his best form immediately after his return.

But the Chelsea winger has still provided three goals and five assists in all competitions this season and scored his first Premier League goal against Burnley in January.

Barcelona are renowned for producing excellent youth products in their academy and Fati is the latest talent from their conveyor belt.

The 17-year-old has enjoyed a remarkable breakthrough season, registering seven goals and an assist in 30 appearances in all competitions.

Madrid will be delighted with his progress as the 19-year-old has scored four goals and provided five assists in La Liga this season.

Real Madrid agreed to pay £40.2million for Rodrygo in 2018, but the Brazil international remained at Santos for the 2018-19 season.

The winger became the second-youngest player to score a hat-trick in the Champions League after a brilliant performance against Galatasaray in November 2019.

He has also featured for their Castilla side in the third tier, but has still registered seven goals and two assists for the first team in his debut season.

Despite being a natural winger, Davies has established himself as Bayern Munich’s first choice left-back this season

The 19-year-old was named the Bundesliga’s 2019-20 Rookie of the Season and has recorded three goals and eight assists in all competitions.

Arsenal signed Martinelli from Brazilian club Ituano for just £6million in 2019 and the 19-year-old has been a revelation in north London.

The striker scored 10 goals and provided four assists in 26 appearances in all competitions this season, becoming the first teenager to score 10 goals in a season for the Gunners since Nicolas Anelka in 1998-99.

Saka is the second Arsenal player to feature on this list and the 18-year-old has been a stand-out player for the Gunners this season.

The versatile forward was recently rewarded with a new long-term contract after registering four goals and 11 assists in all competitions in 2019-20.

If Bukayo Saka didn't shout "MEGS" after doing this, he's a better man than any of us 😂

Even though he only signed for Borussia Dortmund in January, Haaland still finds himself near the top of this list.

The 19-year-old has had an incredible start to his career in Germany, registering 16 goals and three assists in his first 18 appearances for the Bundesliga side.

We should also mention that he got a remarkable 24 goals and seven assists in the first half of the season at Red Bull Salzburg.

Greenwood is widely regarded as one of the best young players to come out of Manchester United’s famous youth academy and it’s not hard to see why.

The 18-year-old has enjoyed a remarkable breakthrough season for Ole Gunnar Solskjaer’s side, scoring 16 goals and making five assists in all competitions.