Where are they now? The 16 kids handed Man Utd debuts by Solskjaer 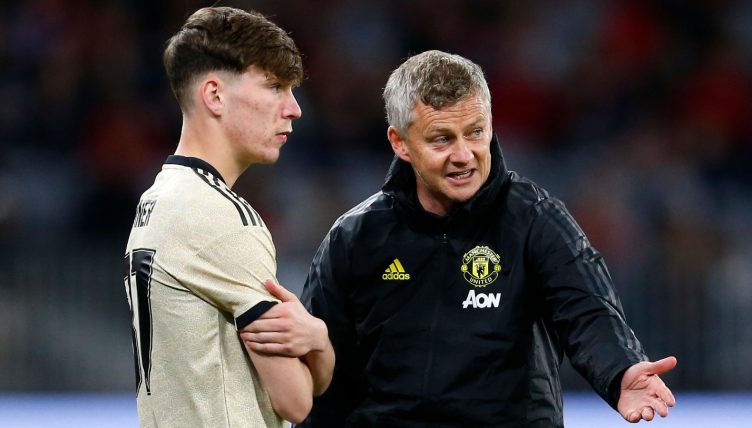 Manchester United have always been famed for giving opportunities to their young players – and Ole Gunnar Solskjaer tried to maintain that tradition during his time as manager.

Solskjaer spent just under three years in the Old Trafford dugout and regularly put his faith in United’s academy stars.

We’ve looked at the 16 academy graduates to make their debut under the Norwegian to see how they’ve fared so far.

Chong was handed his first-team debut early in Solskjaer’s reign, coming off the bench against Reading in the FA Cup in January 2019.

The winger is highly regarded at United but was mainly been restricted to cameo appearances in the Premier League and Europa League in 2019-20.

He signed a new contract at Old Trafford before spending the 2020-21 season on loan at Werder Bremen and Club Brugge. The 21-year-old returned to England and then made a really promising start to a loan spell at Birmingham City before suffering a serious groin injury in November 2021 – he’s since signed for the Blues on a permanent deal.

Garner made his senior debut at just 17 years of age, replacing Fred in the final stages of United’s 3-1 win against Crystal Palace in February 2019.

“I believe he’s got the chance to have a great future,” Solskjaer said after the game. “He knows we believe in him, we’ve got great faith in him as the next Michael Carrick.

“I know he’s young and I know it’s not fair on kids to compare to great players like Michael was, but he’s the same mould, he plays simple passes, plays through the lines.”

The midfielder started three times in the Europa League group stage in 2019-20 but spent most of that season with the Under-23s.

Garner struggled to make an impact during his spell at Watford but moved on loan to Nottingham Forest in January 2021, where he earned rave reviews for his performances.

He returned to Forest for the 2021-22 campaign, played a starring role in their promotion triumph, and has since been signed by Everton.

Currently suspended by the club after he was arrested on suspicion of rape and assault in January. Football matters pale into insignificance in that context.

Williams made his senior debut in an EFL Cup match against Rochdale in September 2019 and quickly became a key part of Solskjaer’s squad, making 36 appearances in all competitions in his breakthrough season.

But the arrival of Alex Telles and the improved form of Luke Shaw saw him fall down the pecking order in 2020-21.

The 22-year-old then decided to join newly-promoted Norwich City on a season-long loan deal but couldn’t stop the Canaries going back down. He’s now back at Old Trafford on the periphery of Erik ten Hag’s first team squad.

Nothing we see this weekend is topping Brandon Williams giving Christian Eriksen a cuddle pic.twitter.com/9oTPK9AdqM

Bernard made his debut in a Europa League game against Astana in Kazakhstan in November 2019, but it didn’t go to plan.

The defender marked the occasion with an unfortunate own goal in a 2-1 defeat and hasn’t played for the senior team since.

He enjoyed a promising loan spell at League Two side Salford City in 2020-21 and continued to impress with Hull City in the Championship last term. He’s currently back at Old Trafford but doesn’t appear to have an active role to play under Ten Hag (yet).

Laird played the full 90 minutes in the 2-1 defeat away at Astana and followed that up with a cameo appearance against AZ Alkmaar.

The right-back was promoted to first-team training in July 2020 and was part of the squad for the Europa League knockout stages.

In January 2021, he was sent out on loan to MK Dons in League One and got his first taste of regular first-team football.

The 21-year-old then followed manager Russel Martin to Swansea City and made an immediate impact for the Championship side in 2021-22. Now he’s continuing his development at Queens Park Rangers.

Levitt was one of United’s standout performers against Astana and looked accomplished on the ball, completing 100 of his 104 passes in the middle of the park.

The 22-year-old never added to his solitary first-team appearance, but he has played for the senior Wales squad under United legend Ryan Giggs.

“He’s a huge talent,” Giggs told United’s official website in May 2020. “In training, he is one of the best. Even though he has yet to play a Premier League game for United, he has already helped raise standards and the senior players feed off that.

“He’s my kind of player – a good character, quiet but tough, and he’s one that I will be taking a big look at over the next year or so. If he plays more games, then he’ll definitely be in the reckoning.”

Despite that assessment from Giggs, opportunities were limited for Levitt on loan to Charlton in the first half of the 2020-21 season.

He took the rather bold step of a loan to NK Istra 1961 in February 2021 before heading to Scotland with Dundee United on a season-long loan deal – before completing a permanent deal to the Scottish club in the summer.

Mellor travelled to Astana on the back of some impressive displays with the Under-23s and replaced Chong for the final 30 minutes.

A second appearance for the club was not forthcoming. After a loan to Salford City last term, he’s since moved to League One outfit Wycombe Wanderers on a permanent deal.

Ramazani also made his senior bow during the shock defeat to Astana, but that six-minute cameo proved to be his one and only appearance for the club.

The Belgian striker rejected a new contract at United and signed for Spanish second division side UD Almeria on a free transfer in August 2020.

“I want to thank the club for helping me become a better footballer/person and for making me and my family feel at home during my time here,” Ramazani said on Twitter after leaving Old Trafford.

“After all the years I can only say thank you to the club, to the fans that have supported me since the first day I wore this jersey and of course thank you and good luck to my team-mates, who helped me settle in since day one not only as team-mates but as friends/family.

“Today I say goodbye to Manchester United but I take with me many memories, lessons and great moments that will live with me forever. It has been one of the best years of my football career.”

He remains there today, helped them get promoted, and even scored on his La Liga debut against Real Madrid. One to keep an eye on this season.

Six minutes into their top flight return, they lead against LaLiga and European champions Real Madrid 😱

An 89th-minute sub in that Astana defeat, Galbraith didn’t get much of a chance to show what he can do.

The midfielder performed well for United’s Under-23s in 2020-21 and last season got his first taste of regular first-team football on loan at Doncaster Rovers. In the summer he joined the Class Of ’92-owned Salford City on loan.

Mengi became the 11th academy graduate to make their debut under Solskjaer, coming off the bench against LASK in the Europa League in August 2020.

The defender impressed for United’s Under-23 and Under-18 teams in 2019-20 and is tipped for a bright future at Old Trafford.

“He’s a leader, a [proper] centre-back,” Solskjaer told BT Sport after Mengi’s debut. “He’s one we believe in. He’s in the same age group as Mason [Greenwood].

“They grew up together. ‘He’s strong, quick, good on the ball. We’ve got a decent player there.”

Mengi moved to Wayne Rooney’s Derby on loan in February 2021 and made nine Championship appearances as they narrowly avoided relegation. Last term he spent another half-season loan stint at Birmingham City, but a hamstring injury cut his time at St. Andrew’s short.

After five seasons out on loan at four different clubs – including a brilliant two-year spell at Sheffield United that saw him called up to the England squad – Henderson finally made his United debut in September 2020, keeping a clean sheet as United beat Luton 3-0 in the League Cup.

The England international has made another 28 appearances for the Red Devils and briefly challenged David de Gea for the No.1 shirt. But it’s a battle he ultimately lost, and now he’s out on loan at Nottingham Forest.

“The conversation I had coming out of the Euro 2020 squad was ‘you’re coming back here to be the number one’,” Henderson told talkSPORT after his move to the Premier League new boys.

“I got COVID-19, came back, so I should have still been the number one, but then nobody followed through with what they had told me.

“It was frustrating, because I turned down so many good loans last summer for that reason, and they would not let me go. To sit there for 12 months, it is criminal really, at my age, I was fuming.”

Shoretire made his senior debut at 17, coming off the bench against his hometown club Newcastle United in February 2021 following some strong showings for the Under-23s.

The little winger made two more cameo appearances in 2020-21 and also won the prestigious Jimmy Murphy Young Player of the Year award. He’s still only 18 and remains awaiting a proper breakthrough. 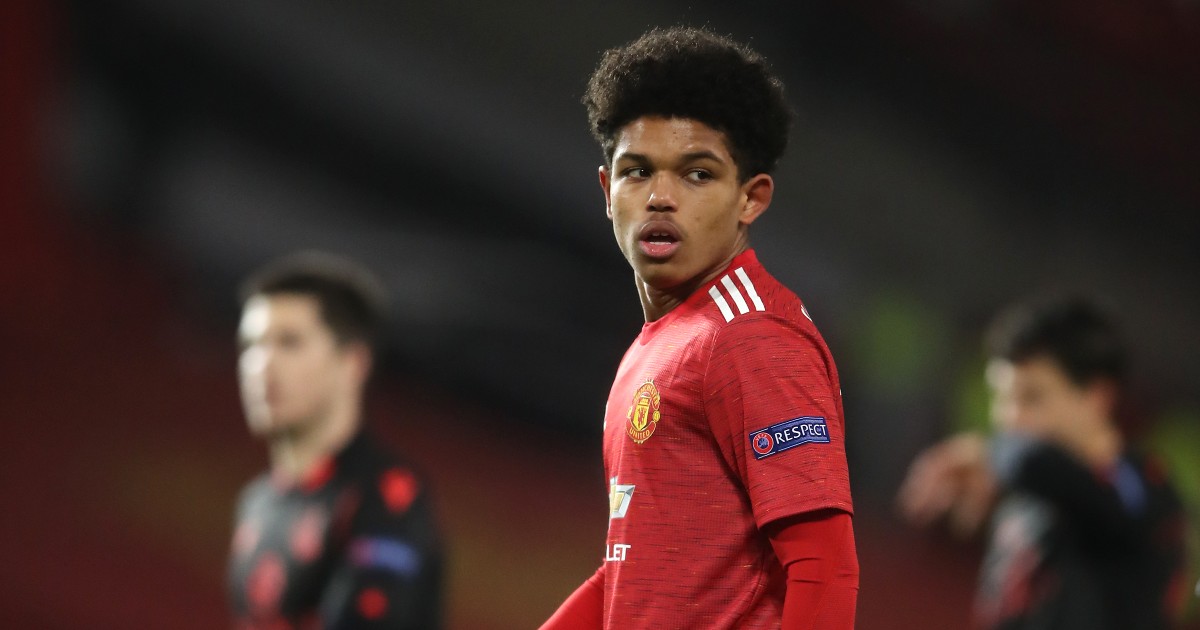 READ NEXT: Where are they now? Every Man United Academy POTY since 2000

Elanga was named in United’s much-changed side against Leicester City in May 2021 and showed glimpses of his talent and electric pace in a 2-1 defeat.

The 20-year-old made his second start for the club against Wolves on the final day of the Premier League season and marked the occasion with a brilliant headed goal.

He’s continued to impress for their Under-23s and eventually broke through to play a regular first-team role amid the club’s struggles last season, although he’s been used a lot less by Erik ten Hag in 2022-23.

The 19-year-old’s first Man Utd goal is a beauty!

After winning the Under-23s Player of the Year in 2020-21, Mejbri was rewarded with a brief cameo against Wolves and managed to embarrass Willy Boly with a cheeky nutmeg.

The 19-year-old Tunisia international added a couple of further appearances last term – impressing Gary Neville in the process – and is now enjoying a first regular taste of first-team football out on loan at Birmingham City.

🗣 "That kid came on at the end and he showed something, the basic, basic principles of being a football player, compete! There's only one kid who came on and demonstrated he had the heart and the soul to play for Man United, him!"@Gnev2 on Hannibal Mejbri's cameo against #LFC pic.twitter.com/UHBFUhDs0u

The last academy graduate to make their debut under Solskjaer, Fish came off the bench for the final couple of minutes in the win against Wolves.

No further appearances followed. Last season he went out on loan to National League side Stockport County but was recalled after making just one appearance. The 19-year-old centre-back is now on loan at Scottish side Hibernian.

READ NEXT: Will Keane: I watched Marcus Rashford and thought, ‘That could have been me’