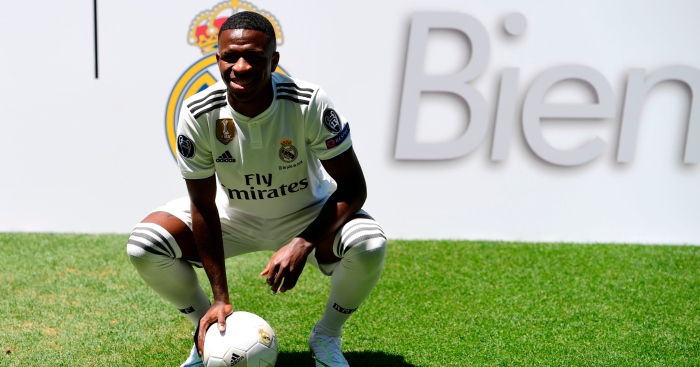 Manchester United and Celtic each paid big money for young players over the summer – and they certainly aren’t the only clubs to have invested in promise.

United paid £19million for Diogo Dalot on the back of just eight first-team appearances for Porto, while Celtic broke their transfer record to sign Odsonne Édouard on a permanent basis from Paris Saint-Germain following a successful loan spell.

Including those two, here are the 11 players to have moved this summer for €10million or more.

Okay, we already knew about this one, but Mbappé didn’t officially complete his €180million move to Paris Saint-Germain until this summer.

The France forward initially joined on loan from Monaco last year with a binding agreement for the transfer to be made permanent so long as PSG avoided relegation. They just about scraped it, finishing 56 points clear of the relegation zone as they won the Ligue 1 title.

Mbappé has scored four goals in his first three games of the season, including this belter.

Another one we already knew about, Júnior completed his $45million move to Real Madrid when he turned 18 in July.

However, anyone looking forward to seeing what the hype is all about will have been disappointed by Real’s decision to use him for their Castilla side this season in the Spanish third tier.

Another big-money signing hardly anyone has ever seen play, Dalot underwent knee surgery over the summer but should be in contention for his Manchester United debut after the international break having turned out for the Under-23s on Friday.

With Antonio Valencia now 33 and Matteo Darmian well out of favour, hopes are high for the 19-year-old, who cost United £19million from Porto and has been described by José Mourinho as “the best young full-back in Europe”.

Fresh from making his debut in Ligue 1 and becoming the youngest ever player to appear in the Europa League last season, Guebbels completed a $20million transfer from Lyon to Monaco in June, aged just 16.

The France Under-17 forward follows in the footsteps of Anthony Martial, who made the exact same move as a 17-year-old in 2013 before joining Manchester United two years later.

Guebbels played the last seven minutes of Monaco’s second game of the season but has not been in the squad for their last two games.

While one Paulinho was leaving Barcelona after one season to head back to China, his 18-year-old namesake was making his first upward move, joining Bayer Leverkusen from Vasco da Gama for $20million, a record for the Brazilian club.

Leverkusen have a history when it comes to Brazilians having previously benefitted from the likes of Ze Roberto, Lucio, Emerson and Jorginho, but it was still seen as something of a coup that they were able to sign up a player previously linked with some of Europe’s biggest clubs.

The attacking midfielder starred as Brazil won the South American U-17 Championship in March and then impressed again at the Under-17 World Cup, while domestically he has two years of senior experience under his belt for Vasco and in 2017 became the first player born in the 2000s to score at the Copa Libertadores.

He has already made a couple of appearances as a substitute for Leverkusen.

One of several young players out there looking to emulate their famous fathers, Justin has followed in Patrick’s footsteps in swapping Ajax for Serie A, joining Roma for an initial $17.25million in June.

The 19-year-old scored 13 goals from the wing across a couple of seasons in the Netherlands, and on his Serie A debut he stepped off the bench to set up the only goal for Edin Dzeko against Torino.

Next up Barcelona followed by a season at Newcastle United? We can hope. His dad, incidentally, is now assistant manager to Clarence Seedorf with Cameroon.

READ: 19 footballer sons who could follow in their famous fathers’ footsteps

Having broken through at Stade Lavallois in Ligue 2, Mukiele was picked up by Montpellier in January 2017 and, after a difficult first half-season at the club, really came into his own in 2017-18 to help Michel Der Zakarian’s side finish in the top half of Ligue 1 with a defensive record bettered only by PSG.

Moved from right-back to the right-sided centre-back in a back three at Montpellier, Mukiele was soon linked with moves to some of France’s biggest clubs but instead made a $16million transfer to RB Leipzig, with the club’s sporting director Ralf Rangnick describing him as “one of Europe’s top defensive talents”.

The 20-year-old has already played five times for his new club, appearing at both centre-back and right-back.

Another young star picked up by Leipzig over the summer, Cunha was signed for $15million from FC Sion after contributing 10 goals and eight assists in 29 appearances in his first season as a senior in the Swiss Super League.

“He’s young, quick and has a lot of quality in attack,” Rangnick said of the 19-year-old Brazilian forward. “He’s especially good in front of goal and he’s versatile.

“He’s developed magnificently over the last year at Sion, but there’s still a lot more potential to tap into.”

The early signs are that Cunha is in the right place to realise that potential having scored three goals in six Europa League qualifiers for Leipzig and also appeared off the bench in both of their Bundesliga games so far.

Completing the trio of exciting young signings made by Leipzig, Saracchi had emerged over a couple of seasons for Danubio in his native Uruguay when he was signed by River Plate last summer.

And a year with the South American giants clearly worked wonders as just a year later he was on his way to the Bundesliga for $12million.

The left-back has still not been capped at senior level by his national team but has immediately established himself as first choice for Leipzig, starting seven games already, including both in the league.

After a successful season on loan at Celtic, Édouard became the club’s record signing in June when they paid £9million to get him on a permanent basis from PSG.

The 2018 Golden Boy nominee contributed 11 goals and four assists in 29 appearances for Celtic in 2017-18, and has scored four goals in eight games so far this season.

The 20-year-old is yet to be called up to the senior France squad but scored a record eight goals in five matches to help the Under-17s win the European Championship in 2015.

Another French forward, Maolida was reported to be wanted by Newcastle United in the summer but instead joined Nice for an initial €10million.

He only scored three goals in 22 games for Lyon last season but has attracted plenty of attention with his dribbling ability and has previously been linked with Barcelona, such is his promise.

He has started two games for Nice in Ligue 1 this campaign, first as a centre-forward and then as a left winger, but he is yet to get off the mark for his new club.