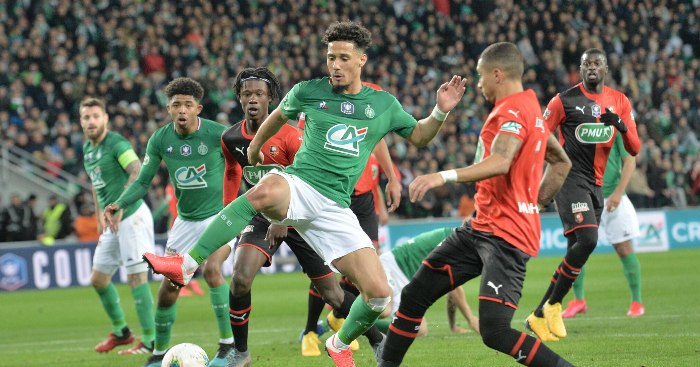 The Mikel Arteta revolution at Arsenal is underway, and the manager has already made clear he intends to make use of some of the starlets currently on loan away from the club in 2020-21.

Much is expected of William Saliba upon his return from Saint-Etienne, while Emile Smith Rowe has also been name-dropped by Arteta in recent weeks.

We’ve taken a closer look at the 12 Arsenal players sent out on loan in 2019-20 and how they fared at their respective clubs.

After joining Bochum on loan for the season, Osei-Tutu’s pre-season with the club was marred after being racially abused by St Gallen defender Sliman Kchouk.

“Moise Kean reached out to me, [Pierre-Emerick] Aubameyang had seen it, Alex Iwobi, loads of people reached out,” Osei-Tutu told football.london in November when addressing the incident.

The 21-year-old has scored five goals and provided two assists in his 21 appearances in Germany’s second tier, operating at both right-back and on the right wing.

His defensive capabilities were criticised at times, leading to him being in and out of the side over the first half of the campaign, but he ended the season in fine form with a run of starts as a winger, where he played in Reading’s academy before joining Arsenal.

This is horrible man, Jordi Osei-Tutu looks distraught. Looks like the opposition player has said something that’s really bothered him.

Whatever happened, whether it was racist or not, there’s 100% no place for it.

Credit to JOT, he calmed down and continued playing. ❤️ pic.twitter.com/Q7m2Boto6e

Ballard joined Swindon on loan ahead of the 2019-20 campaign and appeared three times before suffering a serious knee injury, prompting his return to Arsenal in January.

The defender only made his comeback from injury with Arsenal’s Under-23s in March, impressing after coming on at half-time in a 4-3 win over Monaco in the Premier League International Cup.

Sheaf, who made his solitary appearance for Arsenal three years ago, joined Doncaster Rovers on a six-month loan deal in the summer and impressed sufficiently enough to see that extended until the end of the season – at least until the League One campaign was cancelled in June.

The 22-year-old has been converted from centre-back to midfield and has been a mainstay in Doncaster’s side, making 38 appearances in all competitions.

“Now I almost can’t see myself going back [to centre-half]. It’s strange,” Sheaf said in January.

“I’m really enjoying being a bit further up the pitch. I’ve found myself quite high up this season but also deep at times too.”

Goalkeeper Iliev spent the first half of the season on loan at Slovakian outfit SKF Sered before switching to Polish side Jagiellonia in January. After making 18 appearances for Sered, the 25-year-old has played just four times in Poland.

Despit never appearing for Arsenal’s senior side, Iliev eight years at the Gunners makes him one of the club’s longest-serving players.

“Then I asked if I could go out on loan to get some experience. I’m now here in Poland and hopefully in the future I will get a chance to show my quality at Arsenal.

“I really hope that this will happen and I’m working hard to get this chance. I’m not going to give up, I still believe that I can make it.”

The one they’re all waiting for. Arsenal paid Saint-Etienne £27million to sign the highly-rated teenager last summer, but Saliba remained at the French club on loan for the 2019-20 campaign.

While his season has been disrupted by injury – he has made just 17 appearances in all competitions – his form before Christmas reportedly attracted interest from Real Madrid.

A failure to agree an extension to his loan prevented Saliba from appearing in the French Cup final against PSG, with the defender telling L’Equipe he “left like I was a robber” in departing the club in such acrimonious circumstances.

Despite the disappointing end to the season, Saliba is tipped for big things at Arsenal next season, with Arteta crying out for defensive reinforcements – and the 19-year-old has already been handed the No.4 shirt.

Saliba taking the No.4 shirt is probably bad news for Elneny, who was previously assigned the squad number.

The midfielder has spent the season at Besiktas, becoming a key figure by making 36 appearances in all competitions. Besiktas have been liked with another loan deal but recent reports suggest Elneny will return to Arsenal to assess his options.

A nice reminder of just how much of a sh*tshow the swap deal that saw Alexis Sanchez join Manchester United was for all parties involved, Mkhitaryan is set to join Roma on a permanent deal this summer, with reports suggesting Arsenal have effectively cancelled the midfielders contract a year early in order to move his salary off the wage bill.

“I’m happy to stay here because I still have things that I haven’t achieved yet that I want to achieve,” Mkhitaryan told Roma’s official website, having provided a healthy nine goals and five assists in 22 Serie A appearances.

We’re kinda sad it just never really happened for him in England.

“Don’t be surprised you see him as Arsenal’s number nine in the future,” was the verdict of Michael Appleton, John-Jules’ manager while on loan at Lincoln City, upon signing the striker on loan in January.

The 19-year-old scored once in seven appearances for the Imps before suffering a season-ending injury in March and returning to the Gunners. Despite that blow, John-Jules has already caught the eye of Arteta.

“He can do everything,” Arteta said of the player who turned down interest from AC Milan and the Bundesliga to sign a new long-term deal at Arsenal last summer. “He links really well on the ball every time he’s out of the number nine position. He’s got a really good ability to do that.

Our resident Leeds United fan wants to thank Smith Rowe for scoring Huddersfield Town’s winner against West Brom, the goal that secured Leeds’ promotion back to the Premier League. Nothing else is important.

Arteta to Sky on Emile Smith Rowe: "I am excited to work with him. I have been talking with him and I have followed him during his spell on loan. I think he's someone who can be pretty impressive."

Having initially impressed after being thrown into the first team at Arsenal, injuries stunted Mavraponas’ progress and he was sent on loan to Nuremberg in January.

It has been a familiar tale in Germany’s second tier, starting brightly with two man of the match awards in his first three appearances before picking up an injury in his fifth.

The break came at a good time for Mavraponas as he returned to fitness to play six more times as Nuremberg narrowly avoided relegation.

According to Goal, more than five Bundesliga clubs are interested in signing the 22-year-old on a permanent deal this summer, although his preference is to remain at the Gunners.

Olayinka caught the eye with a stunning goal in Arsenal’s pre-season victory over Colorado Rapids in the summer, but he remains waiting for his competitive debut for the Gunners.

A loan move to Northampton Town was agreed in January, but the midfielder has appeared just once in League Two before football’s postponement.

He was then handed a start in the first leg of Northampton’s League Two play-off semi-final against Cheltenham. Northampton were beaten 2-0 that night, and Olayinka had to settle for cameos off the bench as they turned things around and went on to beat Exeter in the final.

We’re not going to completely write off Olowu’s first-team chances at Arsenal, but the 20-year-old defender was sent on loan to Cork City, where he lost in four out of five appearances, including 6-0 and 3-0 defeats.