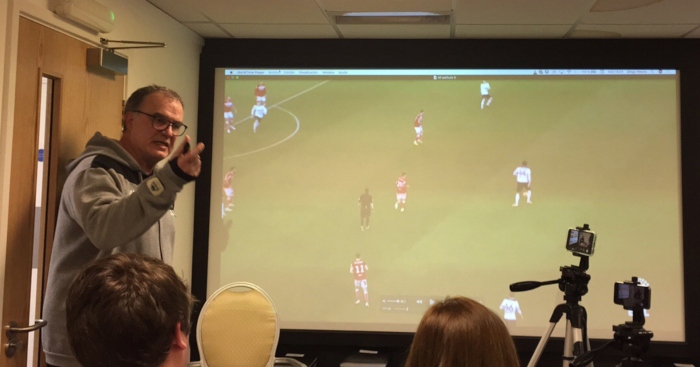 At the end of any football season, we’ll see all the same rewards – Golden Boot, Team of the Season… you know the drill.

However, it’s pretty clear to us by now that the powers-that-be have got it all wrong.

We’ve looked back through some of the real highlights of the season – the things people will be talking about long after the current Premier League crop have hung up their boots.

Masterchef Award for Finishing a Meal – Shay Given

If you were worried about Sky Sports guests not getting a proper meal, Shay Given put your mind at ease.

Indeed, the former Republic of Ireland goalkeeper wasn’t going to let the small matter of a goal of the month contender from Mo Salah stop him from enjoying his Sunday dinner. And rightly so.

The Local Takeaway Award for Services to Salmonella – Patrice Evra

Patrice Evra wanted to make sure you all remembered to commemorate Thanksgiving, but we’re not sure we’d have chosen his method. That can’t be healthy, Patrice.

Meanwhile, an honourable mention goes to another former France and Manchester United star, Eric Cantona, for a bizarre food-related Instagram post of his own.

We saw plenty of special own goals this season, but two caught our eye. First up was Lucas Digne’s long-range effort during Everton’s game against Southampton.

And then we have this moment of confusion from New York City FC goalkeeper Sean Johnson. We’ve yet to figure out what he was trying to do, but maybe we’ll figure it out if we give it another 100 watches.

This own goal is BRUTAL 😬

Celebration of the Season – Mario Balotelli

Some players might try celebrating with a selfie and have it look cringeworthy, but Mario Balotelli has no such trouble – partly because so much of his game has always been about winding up a certain kind of football person.

‘Just Get It Away’ Award – Dulwich Hamlet and Wingate & Finchley

Everyone loves a cracking goalmouth scramble. Well, apart from the players involved in this scrap during the non-league game between Wingate & Finchley and Dulwich Hamlet.

Blackburn Rovers midfielder Richie Smallwood was stuck between the sticks for nearly 20 minutes after an injury to David Raya back in October, and he was up against one of the Championship’s most lethal attacks in West Brom.

However, his team-mates needn’t have worried – he kept out the Baggies, earning a point for his team and a highlight reel for himself.

Are you watching, @England? 👀 pic.twitter.com/0u1NUNcuDQ

As Huddersfield were looking for a replacement for David Wagner, the managerless Terriers were on TV and broadcasters Sky Sports thought they’d spotted Wagner’s replacement-in-waiting Jan Siewert in the crowd.

The good journalists that they are, they sent someone into the crowd to make sure, only to find it was someone else entirely. Better luck next time.

When Denmark’s first teamers were involved in a dispute with the country’s FA over commercial rights, the country still needed to field a team for its game against Slovakia.

The solution? A load of futsal players and rank amateurs made the trip, leading to photos such as this.

Adam Fogt, amateur footballer & futsal player gets called up to the Denmark side, comes off the bench and scores a banger (in his own goal) pic.twitter.com/YplAac7ctg

Back in February, we wouldn’t have guessed that Maurizio Sarri would lead Chelsea into the Europa League final with Kepa his hero in the semis, but the fact that the Spaniard saved the Blues’ bacon in the semi-final seems apt.

In the League Cup final, the goalkeeper seemingly refused to be substituted as Sarri looked to introduce Willy Caballero for the impending penalty shoot-out, and it ended up all being a bit of a farce.

When Marcelo Bielsa called an impromptu press conference amid the ‘Spygate’ scandal surrounding his Leeds United team allegedly keeping too close an eye on rivals Derby County, some outlets suggested he would be announcing a shock resignation.

Instead, though, it was something far more on-brand. The Argentine coach essentially got the country’s media all in one room in order to say: “Of course we’ve been spying on our opponents. You mean to say you haven’t?”

Parklife Award for Services to the English Language – Charlie Austin

When Southampton failed to pick up all three points against Watford, Charlie Austin was not happy with the officials.

Indeed, he made his feelings known in a rant which – while far from measured – more importantly had the exact cadence of ‘Parklife’ by Blur.

Is this why he escaped punishment for the outburst? Presumably, yes.

After his exploits for England at the World Cup, there was a campaign to get Harry Maguire riding an inflatable unicorn on the new £50.

Sadly it was scuppered for unfair reasons like Maguire being ‘still alive’ and ‘not a scientist’. Pedants.

It's already gained more than 15,000 signatures and even @HarryMaguire93 and @kylewalker2 have got involved! pic.twitter.com/MZHQX423Hi