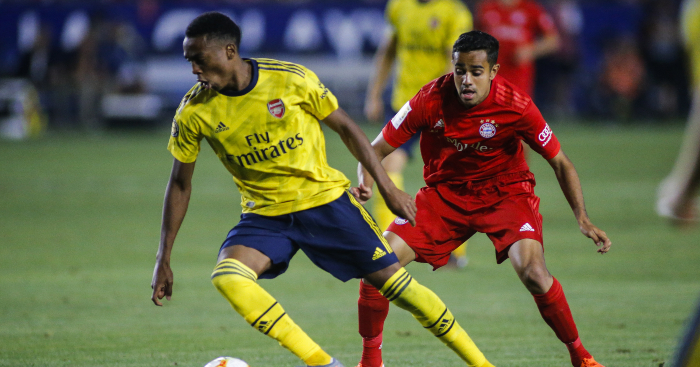 Laurent Koscielny may have refused to travel on Arsenal‘s pre-season tour of the USA – but Unai Emery has handed a number of young players the opportunity to stake their claim for a place in his first team for 2019-20.

Arsenal’s trip to the US, during which they will compete in the International Champions Cup, has been overshadowed by the news Koscielny has remained in England as he attempts to force a move back to his native France.

But, with former Under-23 boss Freddie Ljungberg recently appointed on the first-team staff to create a pathway for young players, a more interesting story may be the number of prospects being handed a chance to impress Emery.

After breaking through into the first-team set-up in Arsene Wenger’s final season in charge, Nketiah was expected to leave Arsenal on loan last season, only for Danny Welbeck’s season-ending injury to scupper those plans.

The striker made nine appearances in all competitions in Unai Emery’s debut campaign and with no replacement for Welbeck arriving, Nketiah could act as third-choice forward in 2019-20.

Having Alexandre Lacazette and Pierre-Emerick Aubameyang ahead of him means the 20-year-old faces a tough task to break into the side, but scoring a late winner against Bayern Munich in Arsenal’s first match in the International Champions Cup is a good way to get into Emery’s good books.

A name fans can be excused for being unfamiliar with, Olayinka’s only previous experience with Arsenal’s first team came in last season’s friendly against Al-Nasr in Dubai.

But the 18-year-old caught the eye in his second appearance, scoring a brilliant goal in the 3-0 victory over Colorado Rapids that kickstarted the Gunners’ tour.

The midfielder has been on the books at Arsenal since the age of six, and the goal clearly meant a great deal to the youngster.

“I’ve been here for 12 years now, so to finally score for the first team is a great feeling,” Olayinka said. “I’m sure everyone at home is happy and hopefully there are many more to come.”

And team-mate Reiss Nelson came up with the perfect description: “It was a banger, you know. I believed in the young lad, I’m happy he’s got his first goal.”

A name fans are most definitely familiar with, Arsenal supporters were licking their lips at the prospect of Nelson returning to make an impact in 2019-20 after the forward made an incredible start his loan spell at Hoffenheim last term with six goals by mid-November.

Still, Nelson seems like one of the prospect closest to becoming a first-team regular, and a couple of decent showings in pre-season will only see the hype intensify once again.

The nephew of Red Dwarf actor Danny John-Jules, Tyreece stepped up to Arsenal’s Under-23 team last season, despite being just 17 at the time.

Having been spotted playing for Charlton at the age of eight, John-Jules has been part of Arsenal’s academy ever since and netted in the first team’s friendly against Al-Nasr in Dubai.

And the striker made another notable contribution after coming off the bench against Bayern Munich, providing the assist for Nketiah’s winner with some smart play against the German champions.

Another goalscorer against Colorado, Saka has already made his competitive debut for the Gunners after making four appearances during Unai Emery’s first season in charge.

Still just 17, Saka has already made a big impression on Freddie Ljungberg, who told football.london: “Bukayo is very, very good. I said it from the beginning of the season. I had him when he was 15 and I have him again, which is a pleasure.

“He’s a kid that’s humble, he works really hard every day in training, sometimes with the first team and sometimes with us. He just needs to keep on working. His time will come.”

Officially promoted to the first team for the 2019-20 season, Willock already has 17 appearances in all competitions for Arsenal, even bagging three goals from midfield in that time.

The 19-year-old replaced Mesut Ozil in the second half of the Europa League final, and a number of more established players will be looking over their shoulders at the England youth international.

A loan move to RB Leipzig in January did not go to plan as injuries restricted Smith Rowe to just three substitute appearances totalling 28 minutes in Bundesliga.

But the midfielder is still just 18 and already has three goals in six appearances for Arsenal, for whom he is both the first player born after the year 2000 to play and score in a competitive match.

New signing Martinelli joined Arsenal from Ituano this summer after being called up to train with Brazil’s senior squad ahead of the 2019 Copa America.

The forward has previously spent time on trial at Manchester United at Barcelona, and the 18-year-old has already opened his account for his new club after finishing off a slick team move to score the third against Colorado.

An Arsene Wenger signing, Mavropanos impressed in his limited appearances under the Frenchman, only for injuries to curtail his first full season in north London.

With Laurent Koscielny pushing for a move and Shkodran Mustafi underwhelming, there is a chance for the centre-back to force himself into Unai Emery’s side next season.

Another centre-back who will be hoping to take advantage of Arsenal’s uncertainty in that position, Medley was previously on the books at Chelsea before moving across London to the Emirates in 2016.

The 19-year-old has appeared three times in competitive fixtures for Arsenal but is yet to make his Premier League bow.

Having also played in central midfield at youth level, Thompson has generally impressed at left-back, where he linked up with Bukayo Saka against Colorado and notched an assist.

Thompson will turn 19 later this month and could be in line to make his competitive debut for the club in 2019-20.

After impressing as a second-half substitute against Bayern Munich, 19-year-old midfielder Burton was namechecked as Unai Emery explained the benefits of Freddie Ljungberg’s promotion.

“We worked last year with Steve Bould, Freddie with the Under-23s,” Emery said :We changed because for them it was a good option.

“With Freddie we are working. Above all he’s helping us with the young players because he knows better than us every young player.

“For example Robbie [Burton], I didn’t know Robbie. Freddie said to me he’s a good player with the capacity to play as a six or eight. Really he helped us like we needed.”

Youth is the way. 💥 pic.twitter.com/SGWP2T5TLl

With over 50 competitive appearances to his name for Arsenal, Maitland-Niles is by far the most experienced of this group of players but is still just 21 years old.

Despite considering himself a midfielder, Maitland-Niles has played a lot of his first-team football as a wing-back but struggled as a more traditional full-back on the right of a back four against Bayern Munich.

Unai Emery still spoke positively of the youngster after the match, however, saying: “I spoke with him [Maitland-Niles]. It’s good to have this problem in the pre-season.

“Today my objective with Ainsley and Sead [Kolasinac] above all; we were playing lots of matches last year with three centre-backs to allow them to go to the attacking moment.

“Today our target was to work defensively, the first objective is to keep the back four [protected].