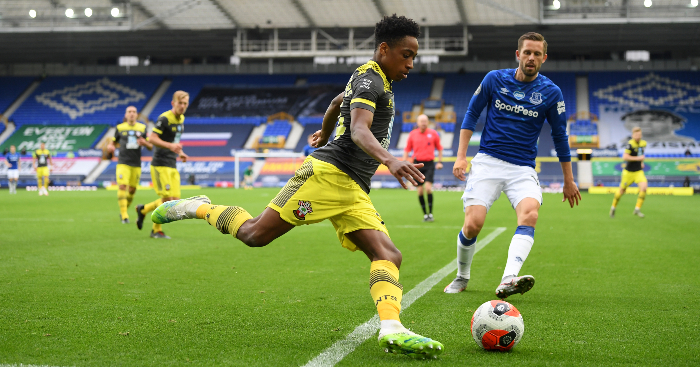 As sure as night follows day, the season is over and Jose Mourinho’s thoughts will have turned to bolstering the Tottenham squad in the transfer market.

But he might also consider reintegrating players out on loan last season, with no fewer than 13 players of their men playing their football away from north London, though some caught the eye more than others.

The 23-year-old defensive midfielder got plenty of minutes – over 2000 – under his belt at Mark Warburton’s QPR, making 34 appearances as they finished 14th in the Championship.

He went a little unnoticed as the Hoops’ attacking talents, Eberechi Eze and Bright Osayi-Samuel, took the limelight and the defence kept just six clean sheets, the lowest in the division.

He says he spent lockdown learning French and brushing up on his psychology and theology. Interesting fella.

His £10m signing last summer brought an end to Spurs’ 18-month transfer drought before immediately getting loaned back to boyhood club Leeds United.

There was sound logic in the move, but he struggled for opportunities in his second stint at Elland Road and never quite recaptured the explosive and exciting form of his breakout appearances, though in truth he never had a chance to, handed just one 19-minute substitute appearance in the league by Marcelo Bielsa.

Tottenham recalled him before Christmas and sent him out on loan to play alongside Amos at QPR, but it was a similar story there as his only start came in the FA Cup, with just six short substitute appearances in the Championship.

Another two half-season loan man, USA international Cameron Carter-Vickers was first sent out to Stoke City, where he featured prominently under struggling coach Nathan Jones before falling out of favour under his successor Michael O’Neill.

Recalled in January and sent out to Luton, fate would see him enjoy a reunion with Jones, who returned to Kenilworth Road during lockdown and masterminded a great escape with Carter-Vickers one of his most trusted lieutenants.

Sterling scored for Doncaster in the League Cup but saw his short time in South Yorkshire stunted by injuries. His parent club elected to send him elsewhere for the second half of the campaign, back to boyhood club Leyton Orient, but he never appeared for them.

Into the final year of his contract, it’s difficult to see much of a future for the 21-year-old at Spurs.

The Cypriot international had two loan stints in League One and it’s a familiar story as he was made to settle for Cup starts and cameos off the bench for Ipswich before injuries saw him sidelined for the majority of his time with ailing Bolton Wanderers.

His only appearance for Spurs remains his debut, in which he was brought off the bench in the Champions League against Apoel Nicosia.

Tottenham believed in the midfielder’s abilities enough to hand him a new two-year deal last summer, having previously impressed during a pre-season tour of the United States.

He made 29 appearances in all competitions for Leyton Orient last season but was back training with his parent club over the hiatus as they prepared for the run-in, featuring in a friendly against Norwich.

The Enfield-born midfielder is a team-mate of Georgiou at international level, both turning out for Cyprus, though it’s difficult to imagine them featuring alongside one another for their parent club.

Roles was a popular figure during his stint at League Two side Cambridge United however, and was named their player of the month back in October, in part thanks to a 35-yard half-volley against Macclesfield.

Armando Shashoua has been a regular in Spurs’ youth sides in recent years but got his first taste of senior football at Spanish third-tier side Atletico Baleares for the second half of the 2019-20 campaign.

But he featured for fewer than 100 minutes across four appearances before the stint was cut short by lockdown.

A regular between the sticks in Wayne Burnett’s Under-23 set-up, the young goalkeeper took the left-field choice of spending the past season at Danish second-tier side Viborg FF. He made 14 appearances for the club but kept just one clean sheet.

Having impressed in his first-team competitive debut, a 2-0 win at Newcastle on the opening day of the 2017-18 season, Walker-Peters could never quite get a consistent run going at Spurs.

But he’s done well at Southampton after making the switch to St. Mary’s mid-season, and earned plaudits for his performance in their 1-0 win over Manchester City in July. Saints are said to be keen on bringing him in on a permanent deal.

Part of the England Under-17 squad that won the 2017 World Cup, but we’re still waiting to see what he can do in senior football.

The midfielder was sent out to Lincoln City in January but didn’t make a single appearance for the club.

“He’s done very well for us and I’m very pleased with him so there will be conversations to have,” was Newcastle boss Steve Bruce’s verdict after the experienced left-back’s half-season on Tyneside.

He’s into the final year of his contract at Tottenham, but would like to stay for a proper send-off after 13 years with the club.

“I want nothing more than to play in front of the Tottenham fans one more time, just to cherish all the moments we have had over the years with them.”

After an injury-hit 2019, the 22-year-old winger finally got some experience of first-team football on loan at Macclesfield for the latter half of the season, making seven appearances for the Silkmen and getting on the scoresheet in a 1-1 draw against Plymouth Argyle.

Ranking every Spurs player by their 2019-20 points per game: Lo Celso 2nd