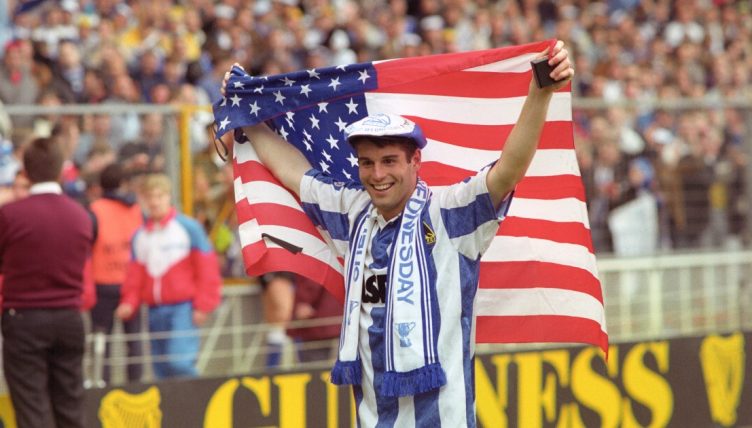 Well, how do you do and welcome to this grand old soccer list about the greatest nation there ever darn was!

We hope you read that in an American accent and that it pained you to read just as much as it did us to write.

It’s strange to think that the old US of A plays football with their feet now, but the game is still growing at an incredible pace in the States and the number of Americans arriving on European shores to play professionally is as well.

Usually, when America put their mind to something they end up being better than everyone else at it by virtue of the fact they have just that much money and that many people and not, as they would have you believe because they’re the free-est, brave-est country ever.

But in terms of football, they haven’t yet figured out how to compete at the top of the game, although let’s be frank England hasn’t either.

So here are the 13 weirdest Americans to ever play in the Premier League, ordered and selected based on our stringent formula and definitely not purely on which ones made us laugh the most.

He signed for Villa on loan from Borussia Monchengladbach for half a season back in 2011 but made just three appearances and was labeled a flop.

Yet a decade on Bradley is Toronto FC captain and has made 150 appearances for the USMNT, having also captained them.

A few years ago Villa fans couldn’t believe that the US national was the third-highest earner in the MLS, behind only Kaka and Sebastian Giovinco. He probably did more than both put together in his domestic league to be fair.

Why do people enjoy being a goalkeeper?

For Keller… well he doesn’t.

Keller joined Spurs in 2001 from Rayo Vallecano but also played for Southampton, Leicester, Fulham and Millwall at various points over his career.

“I really didn’t realize what a horrible position it was until it was too late,” Keller has said.

He stuck with it though, his career spanning 22 years, starting and finishing in the US.

Hunting? Fishing on some huge lake? Maybe some thrill-seeker activity like skiing?

Those past-times have seen him labelled an “All American hero” by Reading.

Seattle born and bred, he started and finished his career with the Sounders. That’s nice.

Before playing for Stoke and QPR, Cameron played for both the Rhode Island Stingrays and the Rhode Island Rams in what we can only assume is the most hotly contested animal-based Derby in the US.

But the reason Cameron is on this list is not for swapping Stingrays for Rams.

Footballers nowadays are not afraid to voice their opinion on social issues and politics and that’s genuinely a good thing, with players able to use their platform to increase public knowledge on an important issue.

Unless you’re a raging Donald Trump supporter that is.

Cameron’s been vocal in his support for the former President, especially when he suspended immigration from majority-Islamic countries.

As you can imagine he was hugely slated for his opinions and he hasn’t said much since and recently has been unable to go over the border to Canada for games because he won’t get vaccinated. Good.

Lol Geoff Cameron couldn’t travel for the match in Canada because he refuses to get vaccinated. With him out of the back line, his team bleeds 5 goals and loses. Play stupid games, win stupid prizes https://t.co/zRJjvqEbcG

Onyewu had a six-month stint in the Premier League with Newcastle in 2007.

He formed a centre-back partnership with Titus Bramble which still gives the Newcastle fan in our office nightmares.

Widely regarded as one of the worst in Premier League history, the two made a number of comedic-level mistakes.

The loan was never made permanent, unsurprisingly, and he’s now sporting director at Orlando City’s B team.

We had to include the first American ever to play in the Premier League.

That means he technically wasn’t a prem signing, but we had to include him anyway.

He stayed with Wednesday until 1993 when he moved to Derby.

Outside of football he’s probably best known for being dropped from the 1998 US World Cup squad not for footballing reasons, but for having an affair with his team-mate’s wife. Of course, when Harkes published his autobiography he didn’t mention it.

Jones joined Blackburn Rovers for six months in 2011 from Schalke.

He became a firm fan favourite at Ewood Park and when he returned to Germany he became a regular under now-United manager Ralf Rangnick.

He’s on here for one reason and one reason only; he’s a US indoor football international.

Jones played for the “United States National Arena Soccer Team”, to give it its full name, a year after he left club football.

Indoor football? If they allow very frequent pauses to down Lucozade Sport and catch your breath we reckon we’d be alright at that.

They say learning should never stop, and former Bolton player Smith took that to heart.

He made just the one Prem appearance for Bolton and now studies at Stanford, which we think inspired Bolton’s stadium to change its name to the University of Bolton stadium.

Stanford might not quite have the same level of academic reputation as Bolton, but that hasn’t stopped Smith from studying history there since his retirement.

“Now I’m here to realize another.”

But here’s the thing, he’s studying history in order to become a medical doctor.

“As a doctor, I’ll need to understand the history of the people I am serving and the country we live in.

“The medical field benefits from humanities majors who approach medicine from unique perspectives.”

If our doctor had studied history before going to medical school and before that was a pro footballer we’d probably listen more too.

Imagine becoming famous because of your hair? Well, that’s kind of what happened to Jones.

The midfielder played one season for Coventry in the Prem in 1994-95 after impressing at the ’94 World Cup, but his escapades in the following year’s Copa America saw him become a sensation in South America for his hair as well as his ability.

He became known as “Escobillon” for his hair meaning ‘swab’, and such was his popularity he played a single season in Brazil for Vasco de Gama in 1995-96.

He then returned to the US for the inaugural MLS season and is the US national team’s most capped player ever.

Edu made just the one appearance for Stoke in the Premier League in 2012.

His career mainly took place in the US, which would explain why, when Jamie Carragher was on punditry duty with him, the Liverpool legend was caught google his colleague to find out who he actually was.

He took it in good humour of course, probably because when he googled Carragher he found plenty to laugh at as well.

Jamie Carragher had to do some research about his fellow pundit Maurice Edu before last night's Champions League games.pic.twitter.com/xDSPfMv7TY

Many sports starts, especially in America, end up going into Movies and TV.

None will have as good a credit as goalkeeper Feuer however, who played for several English teams in the Prem and lower leagues through his career.

He had a cameo appearance in Kicking and Screaming, basically a ‘Soccer’ version of The Mighty Ducks.

An absolute classic, starring Will Ferrell. If you missed it in your childhood it’s probably worth a watch now, especially if you try to spot Feuer.

Americans often have some frankly bizarre names, Brick and Chad come to mind for examples.

But look, we’d love to tell you there’s a more mature reason than his surname for Sunderland’s Gooch to be in here but there isn’t.

There are many reasons Preki deserves the number one spot, but simply put it’s his long career swapping normal football for the indoor version.

Everton actually signed him from an indoor side, St Louis Storm, in 1992 and believe it or not he wasn’t able to successfully transition from Futsal to the Premier League.

He had a long MLS career after that and has been a coach and manager since he retired.

In fact, in 2015 he left his role at one US club expecting to be announced as Leicester City manager, only for Claudio Ranieri to get the job. Apparantley’s Preki insistence they train in the hall at the local leisure centre didn’t go down well.

PREKI PUSHES STARS AHEAD: In Game Four, one of the all-time atmospheres for an indoor soccer match existed at the Tacoma Dome, with over 19,000 fans screaming bloody murder. In a big third quarter, Preki and the Stars jumped out to a 5-2 lead over the Sockers. #TheChampionships pic.twitter.com/v1RJ3nfHzV