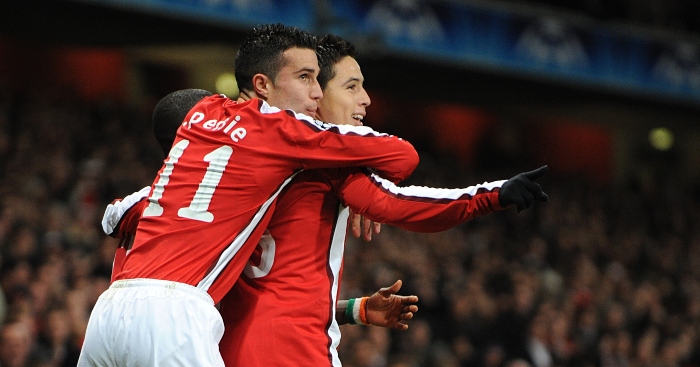 As well as having an eye for a top young talent, long-time Arsenal manager Arsène Wenger knew when to get rid of a footballer at the peak of their value.

Countless players left Highbury or the Emirates Stadium for a big chunk of money, only to fail to deliver anything like the same consistency at their new home.

We’ve looked back at the 15 men to move for £15million or more during Wenger’s tenure, to see how they fared after leaving North London.

One of the last two players to leave Arsenal under Wenger’s watch, joining Chelsea for £18million on the same day that Mathieu Debuchy was sold to Saint-Étienne.

The Frenchman only scored four league goals in his final half-season with Arsenal, but he’s managed just one more in more than a year and a half in West London.

However, he has scored one very important goal in Europe, breaking the deadlock as Chelsea beat Arsenal in the 2019 Europa League final to deny Arsenal silverware in Unai Emery’s first season.

Just over a week before Giroud’s exit, Alexis moved to Manchester United in a swap deal with Henrikh Mkhitaryan, with both players valued in the region of £30million.

You don’t need reminding how terribly things have gone for the Chilean, who scored just five goals in 45 United games and none in his last 12 outings.

Mhkitaryan didn’t do a great deal better, mind you, and both have moved to Serie A this season – the Armenian joining Roma on loan and Alexis making a temporary switch to Inter.

The other big-money departure in Wenger’s final window, Walcott moved north to join Sam Allardyce at Everton for £20miillion.

The former England manager left at the start of that season, and Walcott initially struggled to hold down a regular starting place under Marco Silva but has recently found himself back in the picture.

That said, a return of eight goals and six assists in 60 league games won’t leave Arsenal fans thinking the club made a mistake letting him leave.

Oxlade-Chamberlain left on the final day of the summer 2017 window in an effort to balance the books after the big-money arrival of Alexandre Lacazette, and injuries have meant it’s too early to tell whether Arsenal will live to regret the sale.

The England midfielder impressed in Liverpool’s run to the 2018 Champions League final, but serious injury kept him out of the World Cup and the bulk of last season.

One might argue Oxlade-Chamberlain’s exit allowed Alex Iwobi to thrive under Unai Emery, but he’s gone too now so it’s hard to really pass judgement.

Vermaelen’s fitness was hardly a secret when he moved to Barcelona for £15million, but even with that knowledge his first few months went worse than could have been imagined.

He played just 63 minutes in his first season, waiting until May for a debut runout against Deportivo La Coruña, and has only notched 1,000 minutes in one of his five seasons since leaving Arsenal (and even then, only just).

The Belgian joined Vissel Kobe in the summer and is somehow still playing regular international football. Well, more regular than his last few years of club football, at least.

Wenger had no choice but to sell Van Persie after he Dutchman’s inner child convinced him to join Man United, but that didn’t make the Dutchman’s goals in his first season at Old Trafford any less painful.

There were 30 of them in all, 26 in the league, as United won the title and finished 16 points clear of Arsenal in the process.

Even as United endured a difficult couple of seasons after Alex Ferguson’s exit, Van Persie still chipped in with two more double-figure campaigns, followed by further healthy returns with Fenerbahce and Feyenoord.

It certainly feels like he gave as many good years to other clubs as he did to the Gunners.

Song left in the same window as Van Persie, having laid on a fair few of the Dutchman’s 30 league goals in the 2011-12 season, but his move to Barcelona wasn’t nearly as productive.

The Cameroon midfielder started just 29 times in two La Liga seasons before two years on loan at West Ham during which his most notable moment was a disallowed screamer against the Gunners.

He left Barça permanently in 2016, spending two years at Rubin Kazan before moving to Swiss side Sion, where his team-mates include another former Arsenal player in Yassin Fortuné.

What is is about Arsenal and Barcelona?

Fàbregas was probably one of the more successful signings made from Arsenal by the Catalan club, but that’s not saying a lot.

He was quite good, but not the player who many at the La Liga outfit expected to stay at Barça for life. Indeed, he’s now at his second club since leaving Camp Nou. Weird to think his most pivotal season came after Arsenal turned down the chance to bring him back.

When Manchester City came calling for Nasri, the Frenchman always seemed likely to say yes to the switch.

However, after a great first season, he was unable to step up a level. The former Marseille man still did enough to stay involved as City won a second league title in Manuel Pellegrini’s first year in charge, but his post-Manchester career has been one disappointment after another.

His last two seasons have involved eight league games in Turkey, 246 minutes for West Ham in the Premier League, and a drugs ban. Not great.

Like Nasri, Adebayor started very strongly after trading north London for Manchester. Sadly for him, that’s not where the similarities end.

The Togolese striker scored 14 goals in his first City season, including four in his first four Premier League games, but added just one more the following year before loan spells at Real Madrid and Spurs, the latter turning into a mixed permanent stint.

Like Nasri, he attempted to get his career back on track in Turkey. At least that part has gone better for him.

In all the discussions over former players who might eventually manage Arsenal, Touré’s name is yet to really come up, and yet he’s the one with experience of winning things as a player and thriving as a coach.

He might not have been a regular, but Touré won the Premier League with Manchester City, came second with Liverpool, and played a handful of games as Celtic won the 2016-17 Scottish Premiership.

The Ivorian won another Scottish title as a coach, while he is part of Brendan Rodgers’ staff at Leicester as the Foxes chase a top-four spot in England.

Hleb would later admit his move away from Arsenal was his biggest footballing regret, and the latter part of his career saw him drift to and from BATE Borisov like a newton’s cradle.

Still playing at 38. Could probably still do a job at Arsenal.

Sure, Henry won a Champions League title with (you guessed it) Barcelona, but did he ever really reach the heights we saw of him at his Arsenal peak?

No. The answer is no.

We still wonder what the Gunners might have been able to do if he’d decided to stay.

The first of many big-money sales to Barça, Overmars moved to the Nou Camp for £25million, while Emmanuel Petit made the same move at the same time for a lot less.

He found himself in Catalunya at a difficult time for the club, with managerial upheaval and stop-start displays on the pitch, but there’s no denying his form at Arsenal which earned him the move was a cut above what he showed in La Liga.

On top of that, Overmars struggled with injuries towards the end of his spell, forcing him into early retirement.

Arsenal got a great return on investment with Anelka, earning more than £20million for a player who cost then about £500k.

Things didn’t go to plan for Anelka at Real Madrid, but he’ll still look back on his career with a fair amount of fondness – not least for his league titles with Fenerbahce and Chelsea.

It’s hard to tell what would have become of the Frenchman if he’d stuck around, seeing as he was a teenager when he left, but he certainly took a bit of time to rediscover his Gunners form.