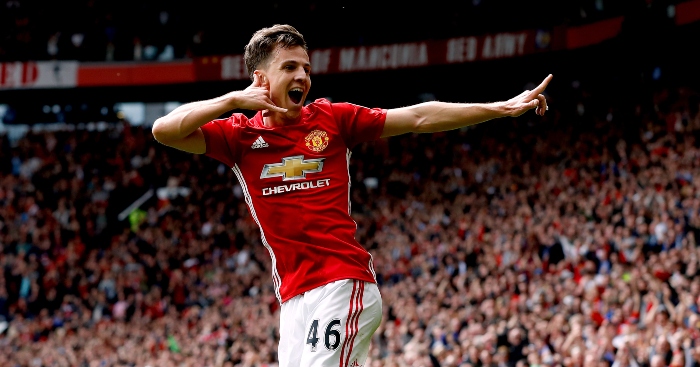 A few Manchester United players have spent their entire careers at Old Trafford, but there are plenty who failed to leave a lasting impression.

It is an achievement just to represent their first team at all, of course, and more than most of us ever manage, but it is surprising how many have just one Premier League appearance to their name for United.

There are 20 in total, not including Demetri Mitchell and Joel Pereira, who are still at the club and still have room to add to their tallies.

Harrop only made one first-team appearance for United, but it couldn’t have gone much better for him.

The winger scored on his debut against Crystal Palace in 2017 but then signed for Preston immediately afterwards, so he has an impressive one goal-per-game record at United.

Harrop has struggled with injuries over the last few years but has scored eight goals in 24 appearances for the Lilywhites so far this season.

Amos only made one Premier League appearance for United, but in his defence he was competing with Edwin van der Sar and David de Gea.

The 29-year-old’s debut came in a League Cup tie, and he then made his top-flight bow against Stoke in 2012, keeping a clean sheet in a 2-0 win.

He was released by United in 2015 and spent four years at Bolton before signing for Charlton at the start of the season.

Lee began his career at United’s academy, but the winger’s path into the first team was blocked by an emerging Cristiano Ronaldo.

Despite scoring on his debut in the League Cup, Lee only ever made one appearance in the Premier League, where he received a guard of honour from the Chelsea players after United had won the league in 2007.

The 31-year-old left for Oldham on a free transfer in 2008 and has spent the last seven and a half years at Sheffield Wednesday.

Mulryne was part of the FA Youth Cup-winning team at United in 1995, but his only league appearance for the club came on the last day of the 1997-98 season.

The midfielder was sold to Norwich for £500,000 in 1999 and had spells with Cardiff, Leyton Orient and Kings Lynn before retiring in 2008.

After hanging up his boots, Mulryne began a completely different career, rediscovering his faith to eventually become ordained as a Roman Catholic priest.

Rachubka made his United debut in the 2000 FIFA Club World Championship in Brazil but only made one appearance in England’s top flight.

The goalkeeper played for 15 different Football League clubs during his career, most notably a disastrous two-year spell at Leeds United.

He reunited with former United team-mate Wes Brown at Indian Super League side Karela Blasters in 2017 and became an accountant after retiring.

Nearly four years after making his United debut in a League Cup tie, Martin eventually made his Premier League debut against Hull City on the final day of the season in 2009.

“Sir Alex Ferguson was impressed with me and brought me back into the first-team fold,” Martin told us. “I was training with the team, I was on the bench against Aston Villa. He held me in high regard, so I finally got the opportunity.

The midfielder was sold to Roy Keane’s Ipswich and is currently playing for Exeter City in League Two.

McKee was in United’s starting line-up for the 1992 FA Youth Cup final, along with future United legends such as Gary Neville, David Beckham and Ryan Giggs.

The forward didn’t quite have the same impact in the first team, however, making just one appearance before being sold to Kilmarnock in 1994.

McKee spent most of his career in Scotland before retiring in 2001, although he did have a brief loan spell with Vikingur FC in Iceland.

In 2004, Dong Fangzhuo became the first Chinese player to sign for United although some critics claimed that the deal was just a marketing ploy.

Dong did little to prove people wrong and made just one Premier League appearance, starting up front alongside Ole Gunnar Solskjaer in the second-string starting XI at Chelsea in 2007.

The forward drifted back into obscurity and retired at 29, with Spanish publication Marca claiming Fangzhuo underwent plastic surgery to stop people from recognising him.

After coming through the United academy, Lawrence was given his debut by interim player-manager Ryan Giggs against Hull City in 2014.

That proved to be his first and last appearance for the club as the midfielder signed for Leicester City a few weeks later. After three years at the Foxes, Lawrence joined Derby County in 2017.

Less than two months into the season, Mason Bennett and Tom Lawrence are charged with drink driving after a night out.

It later turns out that captain Richard Keogh was in one of the cars and will be out injured for the rest of the season. pic.twitter.com/mhj4TAT3f0

Keane was given his league debut by Louis van Gaal against Sunderland in 2014 but started in the 4-0 defeat to MK Dons two days later which ended his United career.

The centre-back was shipped off to Burnley but proved his doubters wrong by earning a £30million move to Everton in 2017.

“After that, I was on international duty with the Under-21s. It was transfer-deadline day and I got a phone call saying Burnley wanted to take me,” Keane told The Guardian.

“It was a bit harsh [from Van Gaal], judging me on one game, but I suppose when you are coming through at Man United you know if you get that chance you need to take it.”

Love made his United debut in a 2-1 defeat against Sunderland in 2016, while his Europa League debut also resulted in a loss.

The defender was brought to Sunderland by David Moyes but struggled with injuries and recently signed for fellow League One side Shrewsbury Town.

United struggled to replace legendary goalkeeper Peter Schmeichel, and Ricardo was another player who failed to fill that void.

The Spaniard arrived at the club in 2002 and made his league debut as a half-time substitute against Blackburn Rovers when his very first contribution was to give away and then save a penalty.

Healy made his Premier League debut as a substitute against Ipswich in 2001 but signed for Preston just a few days later.

The striker went on to have a brilliant career in the Football League and became the all-time leading scorer for Northern Ireland with 36 goals.

After retirement, Healey moved into coaching and has been the manager of Irish side Linfield for the last four and a half years.

Roche played more minutes in the Champions League than the Premier League, though his one game in the latter ended in victory.

The defender replaced Laurent Blanc in the 69th minute of a 5-3 win against Newcastle in 2002 before gradually dropping down the leagues.

“I did okay, but I remember Sir Alex talking to me afterwards because Alan Shearer had beaten me at the far post to win a header, so he told me to get up first and not let the forwards do that to me.”

After retiring from full-time football, Roche now works full-time as a plumber and owns a cavity wall removal business.

Manucho was a complete unknown when United announced that they had bought the striker from Petro Atletico in 2007.

Complications obtaining a work permit saw him loaned out to Panathinaikos, but he finally made his Premier League debut off the bench in a 5-0 win over Stoke City.

Weir came through the United academy and only got a couple of minutes in the Premier League, coming on as an injury-time substitute for Ander Herrera against Arsenal in 2016.

The 24-year-old joined Hull City in search of regular first-team opportunities but struggled to make an impact and was released at the end of the 2018-19 season.

Weir moved to Bolton but was substituted in the first half of an EFL Trophy match against Manchester City’s reserves and later had his contract terminated by mutual consent.

Pugh made his first-team debut against Maccabi Haifa in a Champions League group stage game in 2002 and then his league debut against Tottenham three days later.

The midfielder also featured against Juventus and Deportivo de La Coruna in Europe but was sold to rivals Leeds United in part-exchange for Alan Smith in 2004.

Pugh had to wait six years between his first and second game in the top flight after returning to the Premier League with Stoke City, and the 37-year-old is now coaching at Port Vale.

Thorpe was drafted into the team during an injury crisis and would make his first and only appearance for United as an injury-time substitute against West Ham in 2014.

The defender was released at the end of the 2014-15 season and found himself on the books of Rotherham United in the Championship.

He has been without a club for two-and-a-half years after leaving Indian Super League side ATK in 2018.

“I felt I was ready and that was my chance to grab,” Culkin told us. “But then I went on to take the free-kick and the whistle blew. That was my Man United career done and dusted.”

The goalkeeper joined QPR in 2002 and later became the first player to appear for both Manchester United and FC United.

Djordjic arrived at Old Trafford as a promising talent in 1999, but United had just won the treble so the midfielder found game time hard to come by.

After making just one league appearance in five and a half years at the club, he moved to Rangers on a free transfer.

The 37-year-old retired in 2015 and now works as a pundit for United’s TV channel.