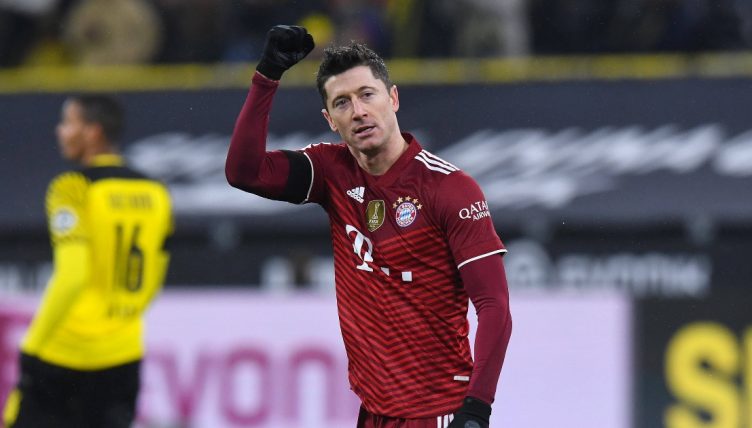 While Cristiano Ronaldo and Lionel Messi didn’t make the top 10, there were still plenty of great players competing for the European Golden Shoe award in 2021-22.

Son continues to go from strength to strength at Tottenham and finished the 2021-22 campaign as the joint top scorer in the Premier League.

Despite not being on penalty duty for Antonio Conte’s side, the South Korea international still scored 23 goals and became the first Asian football player to win the Premier League Golden Boot.

The goal record and his brilliant partnership with Harry Kane helped Spurs finish inside the top four for the first time since 2018-19.

Alongside Son, Salah also got 46 points in 2021-22 and the duo will be sharing the Premier League Golden Boot.

The Liverpool winger made a blistering start to the season and scored 16 goals in his first 20 league games, including three in the 5-0 win over Manchester United at Old Trafford.

After returning from the Africa Cup of Nations in February, he failed to pick up where he left off at Liverpool and only scored seven league goals in 2022.

But the 29-year-old proved he’s more than just a goalscorer and won the Premier League’s Playmaker of the Season award for the most assists.

Having scored 17 goals in the first 21 Serie A games in 2021-22, Vlahovic left Fiorentina and joined Juventus in a £66.6million deal in January.

But the Serbia international, who recently broke the record for most Serie A goals in a calendar year, hasn’t been able to maintain that sensational form during his first few months in Turin.

That’s not to say he’s been playing poorly. The striker has a respectable seven goals in 15 Serie A appearances for the Old Lady, and he also scored seconds into his first Champions League match.

Whether he’ll be on this list next year, however, may well determine whether Juve will get back to the summit of Italian football sooner rather than later.

Schick shot to prominence with five goals for the Czech Republic at Euro 2020, including a stunning long-range strike against Scotland that was voted goal of the tournament.

The striker has maintained that form into 2021-22, and he’s managed to get even better. He has scored an incredible 24 goals in 27 Bundesliga appearances for Bayer Leverkusen, and that’s despite struggling with a couple of injury problems.

He didn’t get a transfer off the back of his performances at Euro 2020 but Europe’s biggest clubs will surely have been monitoring his form throughout 2021-22. If he doesn’t get a big move, it will come down to the 26-year-old’s injuries rather than his ability.

Patrik Schick is the first player to score four times in a single Bundesliga match for Bayer Leverkusen.

While Omoijuanfo is the only player we’ve never actually heard of, he’s actually scored more goals in 2021-22 than eight of the other nine players on the list.

The 28-year-old striker 27 league goals for Molde in 2021 before moving to Red Star Belgrade in January 2022 and scoring six goals in nine league games.

However, goals in the Norwegian and Serbian leagues are only multiplied by a co-efficient of 1.5, meaning he ended the season with 49.5 points in the Golden Shoe rankings.

Ben Yedder just missed out on a place in the Golden Boot top 10 last season, but he is now in the top five after some brilliant performances for Monaco in 2021-22.

The 31-year-old France international enjoyed his best-ever season on an individual level and netted 25 Ligue 1 goals, including a brace in a 3-0 win over Paris Saint-Germain.

He will be off to the World Cup if he maintains such rich form, and it is a sign of the strength of the French side that he would be playing second fiddle to Kylian Mbappe and Karim Benzema if he did so.

After scoring 23 goals in 34 La Liga appearances for Real Madrid in 2020-21, Benzema has taken his game up to another level this season.

Or maybe we’re all just realising just how good he is, Benzema shining in the spotlight vacated by Cristiano Ronaldo and shunned by Eden Hazard.

He scored 27 league goals, nine more than his closest rival for the Spanish Golden Boot, and also finished second in the assists chart too.

All that whilst producing one of the greatest individual seasons in Champions League history. Not bad.

A European Golden Shoe winner in 2019-20, Immobile was probably hoping to reclaim the crown he lost to Robert Lewandowski in 2020-21.

But Lazio endured an up-and-down season under new manager Maurizio Sarri and the striker has to settle for joint third on this list in 2021-22.

He still managed to find the back of the net on 27 occasions and won the Capocannoniere award, which is handed to Serie A’s top goalscorer.

The Italy international has now won the award four times and is one away from equalling Gunnar Nordahl, who holds the record with five.

At about the halfway point in the season, Mbappe had nine Ligue 1 goals and wasn’t to be found on this list. Such is his incredible 2022, he’s burst up the ranks to sit second

He’s only failed to score in six Ligue 1 games out of the 18 he’s played since the turn of the year, scoring 19 in the others to bring him to a total of 28 for the season.

But it’s not just his goalscoring; he assisted an incredible 17 times in 2021-22 and averaged a direct goal contribution every 67.3 minutes in Ligue 1.

It’s easy to see why Real Madrid were so devastated when he signed a new three-year deal at PSG.

The 2021 winner has carried his form over into this campaign – as we all knew he would.

The Poland international has now been the Bundesliga’s top scorer for five consecutive seasons but reportedly wants a new challenge and has been linked with a move to Barcelona.

La Liga defenders will be praying that Bayern are able to change his mind.