25 of the best ‘utility players’ of the 21st century: Milner, Young, Zanetti… 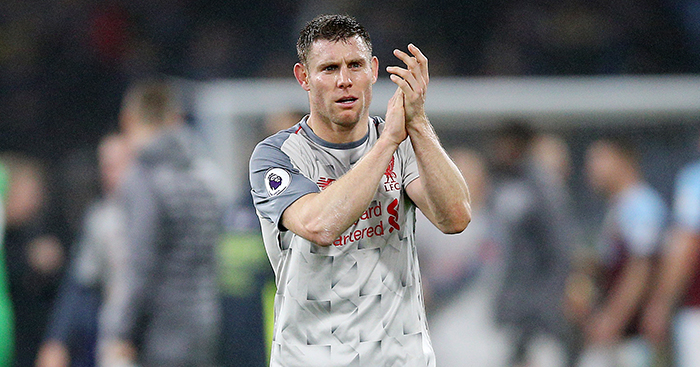 From Philipp Lahm to Lee McCulloch, utility players are a dying breed. We should therefore celebrate the best of them.

Football is changing in so many ways. VAR is a thing, the World Cup can apparently take place in winter and there’s no more Champions League on ITV.

You can also, weirdly, name loads of fucking substitutes.

Maybe this isn’t such a big deal, and maybe you don’t even notice it, but the gradual normalisation of seven or even 12-man benches in recent years has changed the way managers pick their squad.

In Italy’s Serie A, for example, teams are permitted a dozen reserves, allowing managers to select a dedicated substitute for every position on the pitch — plus a spare!

Because of this, it’s not uncommon to see clubs name two substitute keepers.

But is this a good thing?

While the slow swelling of the subs bench has allowed for more tactical flexibility, it could well have a sad effect on the role of utility players, those jacks of all trades who live or die by their flexibility.

In the (recent) days of five-man benches, a utility player was a particularly valuable asset, allowing managers to double up in other positions without risk.

Today, in Serie A especially, that value is diminished.

One could argue, certainly, that increased tactical fluidity is actually producing more versatile players: many defenders are now more comfortable on the ball and can therefore step into midfield, while wingers are often switched from one flank to the other without the team falling apart.

But is utility still valuable? Is it necessary? Is it even a real job? Since utility may be facing extinction, we should celebrate them while we can.

Here are some of the century’s finest, ranked according to a secret algorithm that factors in versatility and being good at football:

Dion Dublin might have spent most of his career as a striker, but Wayne Rooney called him the best centre-back he’d ever played against. (So says Dion, at least.)

Canadian Paul Stalteri didn’t make a huge impact at Tottenham or Fulham. He did, however, tear up the positional rulebook by playing full-back, midfield and up front throughout his career.

Njitap Geremi, the former Chelsea and Newcastle man, generally played right-back or right midfield. He could also play centrally and occasionally filled in at centre-back for Real Madrid. (See him helplessly skinned at 0:23 below.)

One could argue that Wayne Rooney can’t play in any position besides ‘wherever he wants to be at this particular moment’.

Nonetheless, he has nominally played up front and across midfield, and reportedly has above-average goalkeeping skills.

Many of us predicted Rooney would end up as a deep-lying midfielder. For DC United, however, he wears the No.9 shirt and plays as an out-and-out striker.

Two-footed Argentine Cristian Ansaldi has played in Russia and Spain and is now in Italy with Torino, following spells at Genoa and Inter.

Though primarily a left-back, Ansaldi has played in the middle and on both wings. Adaptive!

In 2014, he played for Argentina against Croatia in a friendly match at Upton Park, thwacking a shot into Sergio Agüero to claim an unusual assist.

Once an out-and-out winger, the German morphed into a central midfielder at Bayern, honing his defensive skills over the years.

Logically, he ended his career playing centre-back for Chicago Fire.

Another former Bayern midfielder, Hamit Altintop wasn’t as good as Schweinsteiger, but he was arguably more versatile in his prime, playing across midfield and at right-back.

Though far from the most glamorous player on this list, Ritchie De Laet deserves credit for his own radical transformation.

A right-back and centre-back for most of his time in England, the Belgian became a striker while playing for Melbourne City in Australia.

He scored twice in a 4-3 victory in January 2019 but has since been brought back into defence (via the right wing).

What is Emre Can? The German has appeared for Juventus in a familiar central midfield position but is equally capable across defence.

Time is on his side, so put money on him becoming a striker.

Cardiff’s Callum Paterson has played virtually everywhere on the pitch and was one of Neil Warnock’s best performers throughout 2018-19.

He would run the show in five-a-side.

A Ghanaian playing in China, Frank Acheampong cut his teeth at Anderlecht, playing mostly as a left-back or winger.

Capable of playing anywhere on the left, Jeffrey Schlupp has recently found himself in central midfield at Crystal Palace. He has also deputised as a centre-back and striker over the years.

Remember the 2011 EFL Trophy? Of course you do: Brentford fielded an 18-year-old Schlupp up front, keeping Lewis Grabban on the bench. (They lost, without scoring.)

Let’s just clear this up: John O’Shea’s versatility gets exaggerated because he once played a few minutes in goal and a few minutes as a striker. Still, his abilities across defence and midfield made him a useful squad player at Man United.

And we’ll always have that chip against Arsenal.

An unusual player, Italian winger Simone Pepe — nicknamed ‘Speedy Pepe’ at Juventus — couldn’t do much except run, work hard and play wherever he was told to play.

Those qualities got him pretty far though, as he earned 23 caps for Italy.

Loved by Newcastle fans, the Argentine Spiderman morphed into a full-back while playing the role of teacher’s pet for Diego Maradona.

That will have annoyed a slightly more talented Argentine, who also features on this list.

Many of Europe’s top teams have been linked with Saúl Ñíguez in recent years, and the Spaniard’s versatility across defence and midfield might have something to do with that.

Best known for spells at Wigan and Rangers, Scotsman Lee McCulloch is the definition of a utility man, playing defence, midfield and up front.

At the age of 36, McCulloch scored 17 goals in the 2013-14 season to bring Rangers back into the Scottish Premiership.

That haul included consecutive hat-tricks: one while playing as a striker, the other from centre-back. Not a lot of players can say that.

Dirk Kuyt was a hugely endearing player, not least because of his versatility.

A winger despite having few ‘winger’ attributes, Kuyt also played as a striker and, in his later years, as a wing-back for Louis van Gaal’s Netherlands side.

READ: A brief history of workhorse strikers on the wing from Heskey to Kuyt & beyond

Former Germany captain Philipp Lahm didn’t play all over the pitch, but he mastered both full-back positions and the holding midfield role.

He was very good, wasn’t he?

Another ‘Simone of all trades’, the uncapped Padoin has played across midfield and at both full-back positions and was a useful squad player for Juventus between 2012 and 2016.

Stuttgart’s Gonzalo Castro, a German midfielder of Spanish origin, is nominally a right-back or central midfielder but has featured virtually everywhere on the pitch.

While at Leverkusen in 2015, the utility man contributed two goals and two assists in a single game while playing as a No.10 against Hamburg.

You never saw Gary Neville do that.

Brazilian full-back Adriano spent six productive years at Barcelona, largely thanks to his ability to deputise across the pitch.

Now at Besiktas, Adriano’s first three games of the 2018-19 season were played at left wing, left-back, then right-back.

Like Philipp Lahm before him, Bayern’s Austrian defender David Alaba is happy moving from left-back to centre-back to central midfield.

He loses points for spending the entirety of the 2018-19 Bundesliga at left-back, but he’s also really, really talented.

In Daniel Wass, Valencia have a true Swiss army knife of a player. (Who happens to be Danish.)

In the 2018-19 La Liga alone, the Dane featured at right-back, central midfield and on both wings, also helping his club to Copa del Rey glory against Barcelona.

Literally every outfield position! If Ashley Young wasn’t a flag bearer for mediocrity at Man United, you would call him the finest utility man of his generation.

At the tail-end of the 2018-19 season, Young started at centre-back versus Wolves and was sent off after less than an hour.

It seems a long time since he was playing up front with Emile Heskey.

German utility man Kevin Großkreutz was an important part of the Borussia Dortmund side that won back-to-back Bundesliga titles under Jürgen Klopp.

But then he got a tattoo to celebrate Germany’s 2014 World Cup victory (in which he played no games), and his career has since gone downhill.

Retired Brazilian footballer Rodrigo Taddei is best known for having a very square face, pulling off a ‘hocus pocus’ in a match and generally being incredibly versatile.

Over the years, he played just about everywhere except centre-back.

Cristiano Ronaldo may have mocked Alessandro Florenzi for his height, but the new Roma captain beats the Portuguese in terms of sheer utility value.

The Italian is equally comfortable at right-back and central midfield but has also played on both wings and in a more creative attacking midfield role.

If Roma can allow a multitool to succeed Daniele de Rossi and Francesco Totti, maybe there’s life in the utility man yet?

There are a billion reasons to love Javier Zanetti, one of them being the Argentine’s gleeful adaptability across the pitch.

He played his last ever match, aged 40, at right wing-back.

The man, the myth, the legend. James Milner has played everywhere on the pitch except centre-back.

As a youngster, he was generally considered a winger, but today’s Milner is more often seen at full-back or central midfield.

In late 2014, the Yorkshireman even spent a run of games as Man City’s lone centre forward.

He was never, ever boring.

Can you name every Champions League-winning manager?