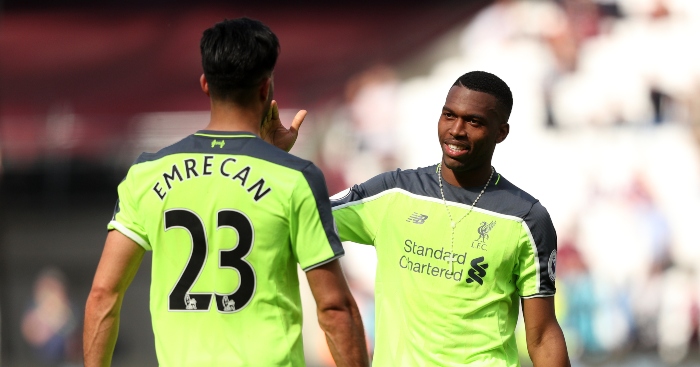 When Jurgen Klopp was appointed Liverpool manager, the Reds were 10th in the Premier League. Four years on, they’re champions of Europe and sit top of the table.

Klopp has overseen a huge transformation at Anfield, not least in his efforts in evolving and refining the squad at his disposal.

We’ve taken a closer look at the 31 players with Premier League minutes to have left Liverpool under his watch, and where appropriate mentioned who came in as a replacement.

If Balotelli couldn’t cut it under Brendan Rodgers, the striker was never going to last under Klopp.

Rodgers took a punt on Balotelli, but by the time Klopp arrived, the Italy international had been sent out on loan to former club Milan.

Klopp was happy to allow Balotelli join Nice on a free transfer in the summer of 2016, with Sadio Mane joining from Southampton for £30million at the same time, which will surely go down as one of the German’s greatest signings.

Toure appeared 24 times for Liverpool under Klopp, scoring his first goal in any competition for over five years with the final goal in a 6-0 win at Aston Villa, living his best life in celebration.

The defender reunited with Brendan Rodgers at Celtic after his contract expired at the end of Klopp’s first season, with Liverpool bringing in Ragnar Klavan and Joel Matip that summer.

After an indifferent start to life on Merseyside, Matip has emerged as one of Klopp’s key charges.

Two years ago today, Kolo Toure scored his only Liverpool goal in a 6-0 win against Aston Villa. Classic celebrations. pic.twitter.com/BXHpVQyBsp

A sole three-minute cameo off the bench totalled Teixeira’s Premier League involvement under Klopp, although he also appeared in the cup competitions.

Now 26, the attacking midfielder joined Porto at the end of the 2015-16 season but made just eight league appearances over two years and is now on the books of Vitoria Guimaraes.

His role as young squad player to be used in cup competitions was taken by Ovie Ejaria the following campaign.

We still don’t understand Smith’s career, with the left-back on loan at Seattle Sounders after failing to make an impression at Bournemouth.

Liverpool didn’t even bother replacing him, instead converting James Milner into an auxiliary left-back. They do have a buyback option on the Australian though.

Alberto hadn’t played for Liverpool for two years by the time he was eventually sold to Lazio, where he has rebuilt his career and even made his senior Spain debut. That’s nice, but Liverpool aren’t exactly lacking in the forwards department.

Another more established player to leave Anfield in Klopp’s first summer, the centre-back left two weeks after the arrival of Matip, and Klavan joined a week later.

Allen appeared 33 times in all competitions under Klopp but never fully established himself in the German’s Premier League XI and was allowed to join Stoke for £11million. Georginio Wijnaldum signed from Newcastle United just three days earlier.

Like Smith, Ibe has disappeared down the Bournemouth vortex. Like Smith, Liverpool are unlikely to activate that buyback clause anytime soon.

Is there a sadder footballer in the Premier League right now?

Since Mane joined Liverpool and Benteke departed for Crystal Palace, the former has scored 67 goals in all competitions to the latter’s 21.

Since the start of 2017-18, Mane has scored 54 goals in all competitions, Benteke has scored four.

Canos’ sole Liverpool appearance in the Premier League came as a late substitute in the final game of 2015-16, after which he was sold to Norwich before establishing himself at Brentford.

Like Canos, Rossiter made a solitary Premier League cameo in the 2015-16, albeit under Rodgers.

Klopp memorably bemoaned an injury suffered to Rossiter while on international duty with England Under-19s by saying:  “If we handle them like horses, we get horses.”

The midfielder left for Rangers at the end of the campaign but is currently on loan at League One outfit Fleetwood Town.

Following an acrimonious exit from Liverpool in the summer of 2016, Sinclair is still technically on the books at Watford, albeit now into his fourth loan spell away from Vicarage road, currently plying his trade in the Eredivisie with VVV-Venlo.

Wisdom isn’t playing a great deal for Derby these days, but he did briefly return to the public eye as the subject of Football365’s #WednesdayWisdom tweets, a joke they failed to explain to anybody and was sadly short-lived.

Stewart was handed his senior Liverpool debut by Klopp after returning from a loan spell at Swindon in January 2016 and made 20 appearances in all competitions over the next 18 months before joining Hull City in the summer of 2017.

“I have been blessed to live and work in this city, a place that I have come to realise is different to any other,” Lucas wrote in an open letter to supporters upon his departure to Lazio in 2017, “and while living here I have been married and blessed with two wonderful children so whatever happens now we will always take Liverpool with us everywhere we go.”

The Brazilian’s first-team role was gradually reducing at Anfield, and Alex Oxlade-Chamberlain offered further options in midfield after joining from Arsenal later that summer.

Klopp displayed his ruthless side in bombing Sakho out of Liverpool after a series of breaches of discipline. The defender initially joined Crystal Palace on loan before signing permanently in a £26million deal.

After trying and failing to sign Virgil van Dijk that summer, Liverpool eventually got their man the following January. It worked out well.

Shortly after taking over at Liverpool, Klopp described Brannagan as possessing “everything you need for a midfield player”, with the youngster rewarded with a new deal and his first two Premier League appearances towards the end of the season.

But he failed to kick on and is now at Oxford United, where he plays alongside on-loan Liverpool prospect Ben Woodburn.

Liverpool received an initial £105million for Coutinho, didn’t sign a replacement and managed to get even better as a team. Go figure.

Injury issues had halted the momentum of Flanagan’s Liverpool career by the time Klopp was appointed, and the full-back barely featured under the German, spending time on loan at Burnley and Bolton before joining Rangers permanently.

By that point, Trent Alexander-Arnold had firmly established himself as the Reds’ first-choice right-back.

A strange player to try work out, Can missed much of Liverpool’s run to the Champions League final in 2018 due to injury and left in the summer to join Juventus on a free transfer.

Klopp, meanwhile, brought in Naby Keita and, most importantly, Fabinho, while Can is now being linked with a move away from Juventus amid their abundance of mdifielders.

Just fine, wasn’t he, and there’s nothing wrong with that. His departure has helped pave the way for Joe Gomez to play more first-team football at least.

Leicester were thought to have completed something of a coup in signing the highly-rated Ward from Liverpool in 2018, but he has yet to appear in the Premier League for the Foxes while the Reds are £12.5million better off.

READ: Revisiting The Guardian’s first Next Generation picks from 2014

Injuries decimated Ings’ Liverpool career, and his permanent sale to Southampton should allow Rhian Brewster to be given more opportunities in the senior squad.

Bless him. Liverpool have decided to go into 2019-20 without a recognised back-up left-back for Andy Robertson rather than offer Moreno a new contract.

When Divock Origi was toiling away in loan spells at Lille and Wolfsburg, we didn’t expect the striker to outlast Daniel Sturridge having just scored in a Champions League final victory.

As soon as Mignolet left Liverpool off the back of a season in which he failed to appear in the Premier League, Alisson Becker suffered an injury, new No.2 Adrian was given an extended run in the team and Liverpool were forced to sign Andy f*cking Lonergan.

£5million for a player with one minute of Premier League football to his name – Liverpool are really good at this.

Randall only left Liverpool permanently this summer, which doesn’t seem quite right.

He’s now playing in Bulgaria for Arda Kardzhali, which doesn’t seem quite right.