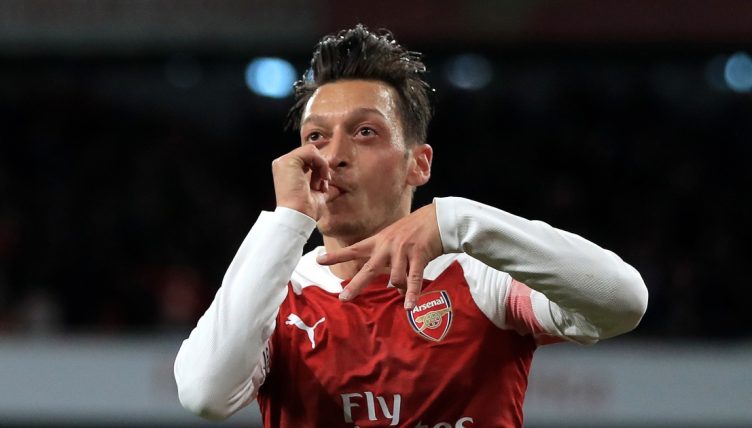 Mesut Ozil turned out to be one of the more divisive players in Arsenal’s history, but how did the others signed alongside him fare?

Arsene Wenger bought Ozil to the Emirates during the summer of 2013 after Arsenal fans had clamoured for a marquee signing for a number of seasons. The arrival of the German playmaker was met with ecstatic scenes but Ozil only partially delivered on what was expected of him.

But he was not the only player to arrive at the club that summer. We take a look at the four other faces that joined the Gunners in the same window as Ozil and how they fared.

A cheat code on various iterations of Football Manager, desktop Guardiolas everywhere were thrilled when Arsenal picked up Sanogo on a free transfer from Auxerre.

Then reality hit. The striker was only 20 when he arrived at the Emirates and immediately looked too raw for first-team football. Wenger tried to gently encourage him, calling one performance against Liverpool in the FA Cup as ‘excellent’, but Sanogo was the wrong man to fire Arsenal’s title challenge.

He even failed to look the part while scoring four goals during an Emirates Cup game against Benfica. The only competitive goal he recorded came in a Champions League win against Borussia Dortmund, adding to the surreal feel of Arsenal winning against elite opposition in Europe.

He was loaned out to Crystal Palace, Auxerre and Charlton before being released in 2017.

Sanogo tried but he was almost heroically bad.

They say never go back, but Flamini’s return to Arsenal went quite well all things considered.

Bought back from AC Milan to provide some much-needed bite, the long-haired midfielder won rave reviews for his early performances as Arsenal stormed to the top of the 2013-14 Premier League table.

That didn’t last – of course it didn’t. And Flamini was never likely to provide a long-term solution to Arsenal’s well-documented reluctance to replace Patrick Vieira.

He won the FA Cup twice during his second spell at the club, but Flamini was an unused sub on both occasions. He left for Crystal Palace in 2016 after 93 appearances and five goals.

He may be a solid fixture in West Brom’s first team these days, but Ajayi never made it onto the pitch during his time at Arsenal.

In fairness, he was definitely signed with more than one eye on the future after arriving from Charlton Athletic following an impressive trial in September 2013.

There were simply too many players ahead of him. Ajayi made the bench during four Premier League matches in 2014-15 and a League Cup defeat to Southampton but it was clear that he’d get more playing opportunities elsewhere.

A loan spell at Cardiff City provided that and the Nigeria international made the permanent switch to Wales in the summer of 2015.

Macey was a raw 19-year-old when Arsenal paid Bristol Rovers £100,000 compensation for his services in October 2013.

The West Country native was chosen to travel with the first-team to a pre-season training camp in Austria and made the bench for a league match against West Brom.

Loan spells at Accrington Stanley, Luton Town and Plymouth Argyle followed without Macey making an Arsenal appearance during his seven years at the club.

Despite this, Macey earned a 2020 FA Cup winner’s medal as part of the squad that beat Chelsea 2-1 and was raved about by Kieran Tierney.

Speaking to the Scottish Sun, Tierney said: “He’s a genuine guy with a lot of ability. Matt’s a hard worker. At Arsenal it wasn’t easy for him, not getting games.

“But every day in training he was on it 100 per cent, so he deserves the opportunity at a big club like Hibs.”

He joined Scottish Premier League club Hibernian on an initial loan deal in January 2021 before making the permanent move north at the end of the 2020-21 season. He’s been a regular for the Scottish Premiership side this season.

Ranking every player to wear the No.5 shirt for Arsenal in the Premier League