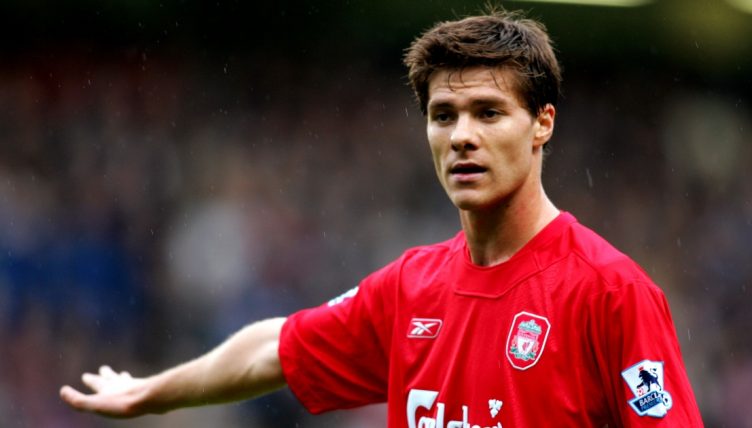 The summer of 2004 was a transformative time for Liverpool, with Rafael Benitez arriving as the club’s new manager alongside five new first-team signings.

Xabi Alonso, back then a young and highly-rated young midfielder at Real Sociedad, is the most fondly remembered of that quintet of new recruits, having played a key role for the Reds in their miraculous Champions League victory before becoming a standout player as they challenged for the Premier League title.

The former Spain international enjoyed an illustrious career, winning league titles with Real Madrid and Barcelona, but how did Liverpool’s other four summer signings that summer fare?

Liverpool’s marquee signing that summer, a 22-year-old Cisse, had just had the season of his career with Auxerre.  He scored a career-best 26 goals in the 2003-04 Ligue 1 campaign, earning status as the next big thing in French football.

But his time on Merseyside was marred by injury, and his debut season with the Reds resulted in just four goals in 16 Premier League appearances.

A nomadic career followed, with stints back in England at Sunderland and Queens Park Rangers as well as spells at the likes of Marseille, Lazio and Panathinaikos.

Cisse hasn’t played professionally since 2018, but in the summer of 2020 he offered to play for free in search of 100 Ligue 1 goals (he’s just four shy, on 96). Unfortunately, no one took him up on the offer.

Benitez’s first official signing (Cisse had already been sealed before his appointment), Spanish defender Josemi had established himself as a dependable right-back across three seasons with Malaga.

But he received a red card in a 4-2 victory against Fulham early in his Liverpool career and struggled to win back his place after Steve Finnan came back in.

Josemi returned to Spain, signing for Manuel Pellegrini’s Villarreal midway through the 2005-06 season, and he remained a La Liga regular till 2010 before seeing out his career in Greece (Iraklis, Levadiakos, Skoda Xanthi) and India (Atletico Kolkata).

It’s easy to forget his time in Merseyside, but his honours list proudly lists the Champions League, having made seven appearances in the miraculous run to Istanbul, where he was an unused substitute in the final.

An outstanding candidate if Liverpool’s 2004-05 Champions League winning squad ever came up as a question on Pointless, former Real Madrid midfielder Antonio Nunez spent just one season at Liverpool.

A knee injury stunted his immediate progress after making the switch from the periphery Real’s Galacticos squad, before he eventually made his debut off the bench in a last-gasp 2-1 victory over Arsenal, which came courtesy of an injury-time Neil Mellor strike.

“I remember those early months as being hard days,” Nunez recalled in an interview with the Liverpool Echo. “When you come to a new club, you want to impress, you want to do as much as you can, but it was quite a serious injury.

“For one month I was living in the Hope Street Hotel, I couldn’t look for an apartment because my knee was so painful. I had to have surgery to fix it. Having those three months out, made it more difficult for me when I came back to get the pace of the game here.

“It’s funny, I remember my first touch against Arsenal. I was trying to touch the ball a bit long and then run down the right wing. I tried to do it to Patrick Vieira. He just put his arm across me, ‘Whack!’. I found him so strong. I thought: ‘Okay, English football is going to be hard’.”

Completing the quartet of Benitez’s Spanish compatriots to arrive from La Liga, Luis Garcia signed the same day as Alonso having been deemed surplus to requirements at boyhood club Barcelona after one season.

He scored 13 goals in all competitions during his debut season at Liverpool, the last of which was the ‘ghost goal’ that booked the club’s place in the 2005 Champions League final. A further 17 goals followed in the next two seasons before he signed with Atletico Madrid for a second stint in 2007.

Having retired in 2016 following a stint with Australian side Central Coast Mariners, he’s since become a prominent pundit and Liverpool ambassador. The former winger has never been shy to reminisce about the most famous goal of his career, even though it might not have crossed the line.