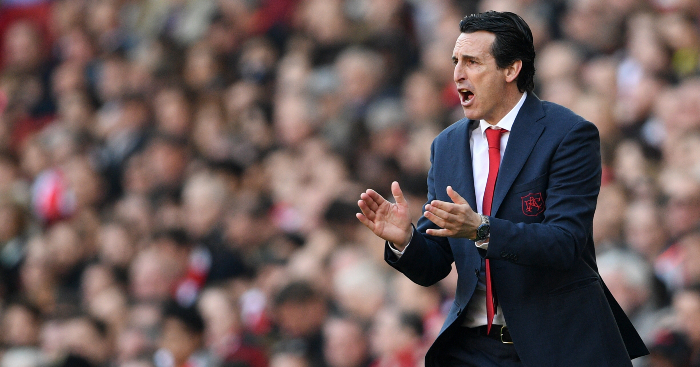 Unai Emery’s tactics have been questioned in recent weeks as Arsenal continue to struggle this season – but is the manager to blame?

Despite being at the club for 18 months, the Spaniard still doesn’t seem to know his best team or formation, as he has been constantly changing systems.

We’ve looked at all the changes that Emery has made to the Arsenal starting Xl over the last seven games.

Arsenal started this Europa League group game in a 4-2-3-1 formation, but they found themselves 2-1 down at half time. Emery then brought Nicolas Pepe on with 15 minutes left and the winger scored two free-kicks to win the game.

Pepe with a touch of class last-night, scoring a sensational free-kick to bag #Arsenal 3 points…🔥

After resting a few players during the week, Emery made nine changes to the starting line-up for their Premier League game against Crystal Palace.

The Arsenal manager also used a 4-4-2 formation as he paired Pierre-Emerick Aubameyang and Alexandre Lacazette in a front two.

The home side got two early goals but looked vulnerable defensively and Palace got an equaliser in the second half.

Emery rotated the team again, as he changed the entire starting line-up for their Carabao Cup game at Anfield. Emery also used a  4-4-1-1 formation because he brought Mesut Ozil back into the team and played him in his favoured position.

The German had an impressive game as Arsenal scored five goals, but they also conceded five and went out on penalties.

The Gunners made another nine changes for the Premier League game against Wolves and tried another new formation with 4-3-1-2.

This saw Arsenal play with a midfield three while Ozil tucked in behind strikers Aubameyang and Lacazette as the central attacking midfielder, but the game ended in a 1-1 draw.

As Emery looked to tighten up his defence, he switched to three at the back for their trip to Portugal and used a 3-4-3 formation, with only two players from the Wolves game keeping their places.

This system allowed Arsenal’s wing-backs to bring the ball forward and create overlaps out wide, but they couldn’t stop Vitoria getting a late equaliser.

Arsenal made 10 changes to the line-up but stuck with a back three against Leicester, although it was a different 3-4-1-2 formation. It saw Sead Kolasinac and Hector Bellerin line up as the wing-backs while Ozil started behind the two strikers again.

However, the front three didn’t see a lot of the ball as Leicester dominated the game and eventually won 2-0 after goals from Jamie Vardy and James Maddison.

Emery used a similar formation against Southampton, but he made two changes to the line-up while the wing-backs also started from a deeper position.

However, the manager made a half-time change and reverted to a back four (4-2-3-1) as Calum Chambers was replaced by Pepe. Arsenal then looked more dangerous in attack and Lacazette eventually got a late equaliser.

Unai Emery on the formation:

"That decision is because I need to find solutions. The first-half we were better defensively but we needed to attack more. Second-half we attacked more but we lost the balance. I need to find the solution." pic.twitter.com/bf0qgucahG

Emery may argue the figures are misleading given the past seven games have been split between the Premier League, Europa League and League Cup, but the line-up changes from game to game amount to 50 in total, with a different formation used in each.

The upshot is that Arsenal have drawn five and won one of those seven games. They’ve scored 14 goals and conceded 15 in that time.