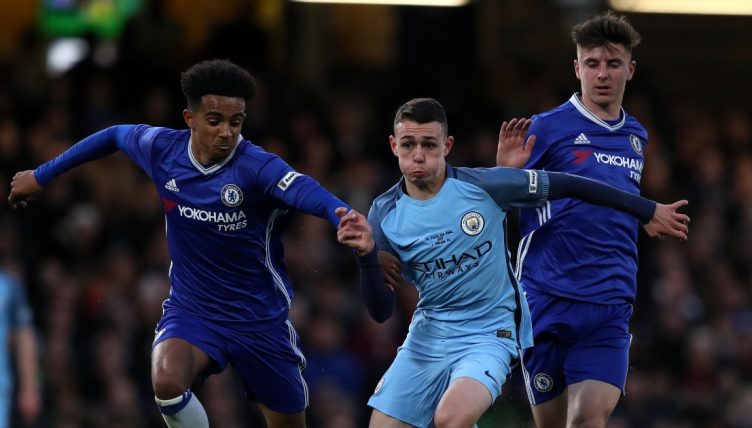 No side in England has dominated the youth football landscape as much as Chelsea in recent years, but not every promising young player can make it at Stamford Bridge.

The fruits of their Under-23 and Under-18 successes are clear to see. Some of the standout performers in Thomas Tuchel’s Champions League-winning side are from the academy, while former Blues Tariq Lamptey and Jamal Musiala have shone and can serve as an inspiration for those looking to make the grade elsewhere.

Last summer, Chelsea released nine of their academy players. Here’s how each of them are faring a year later.

Brixton-born Grant was with Chelsea since he was eight years old and went on to represent England at the Under-18 and Under-20 levels, featuring for the latter as they won the Toulon Tournament in 2017.

He went on to gain senior experience in half-season loans with Yeovil Town and Plymouth Argyle before leaving Chelsea permanently when his contract expired at the end of 2020, but the south-west seemed to suit him and he signed for Bristol Rovers.

The defensive midfielder played a prominent role in their 2020-21 season, predominantly slotting in at the base of midfield, but it was a season to forget for Rovers, who switched manager twice and eventually appointed Joey Barton before finishing rock bottom of League One.

The Ivory Coast Under-23 goalkeeper originally signed for Chelsea as a highly-rated prospect from French lower-league side Stade Poitevin back in 2017. He spent three years at Cobham and represented the Blues in various youth competitions before signing for Vitoria Guimaraes in 2020.

Tie signed a five-year deal with the Portuguese club, but the 20-year-old is yet to be included in a first-team squad.

Ten days after Tie signed for Vitoria, he was joined by a familiar face from Chelsea in 22-year-old midfielder Maddox.

Once talked up as having the potential to make it at the very top, having featured alongside Mason Mount in the youth set-up and four different youth levels for England, that talk quietened down during a loan at League Two side Cheltenham and subsequent stints on the periphery at Tranmere and Southampton.

The Bristol-born starlet had first arrived at Chelsea as a teenager and spent seven years on their books before leaving for Portugal. He made six appearances (two starts) in all competitions for Vitoria, but he hasn’t been since Christmas.

READ: Where are they now? Mount’s team-mates from his last Chelsea U23 game

The goalkeeper, with Chelsea since Under-9s level, had kept 10 clean sheets in 19 appearances and impressed during their run to the FA Youth Cup final in 2019-20. But he was allowed to leave on a free transfer to Wealdstone shortly before the transfer window closed back in early October.

Askew spent the first half of the season on the fringes for the struggling National League club before eventually making his senior debut in a 5-1 victory over Barnet in April. The 19-year-old’s subsequent appearances were less successful; six straight defeats, in which he shipped 20 goals, including a 6-0 loss to Maidenhead, a 5-0 loss to Dagenham & Redbridge and a 4-0 loss to Stockport.

Aina enjoyed a family reunion at Fulham in 2020, joined by his big brother Ola, who had left his boyhood Blues for Torino a year prior before joining Scott Parker’s side on loan from the Italian outfit.

The 19-year-old left-back is yet to make his senior debut, having spent the 2020-21 campaign turning out for Fulham’s Under-23s in the Premier League 2.

Chibueze was released in mid-October and spent 10 weeks without a club before signing terms with Leicester in February amid reports that Ligue 1 club Nice were also interested in signing the 17-year-old goalkeeper.

He’s since turned out for the Foxes’ Under-18s, playing in the FA Youth Cup in a 2-1 victory over Exeter, as well as six appearances in the Under-18s Premier League.

Tottenham bolstered their youth ranks last summer by swooping to sign centre-back Tobi Omole from Arsenal and right-back Lavinier from Chelsea after they were released by their boyhood clubs.

Lavinier had won the Under-18 quadruple back in 2017-18 but failed to kick on and make a breakthrough in the first team, unlike his former team-mates Billy Gilmour, Callum Hudson-Odoi and Reece James.

The 20-year-old spent the 2020-21 continuing his development with the Under-23s in the Premier League 2 and made his senior debut with a 15-minute cameo off the bench as Jose Mourinho’s Spurs saw out a 4-0 Europa League victory over Wolfsberger in February.

A night to remember for these two ✨

Hammersmith-born centre-back Nartey first joined Chelsea at Under-9 level and spent the final year of his Cobham contract away on loan at Burton Albion. He made 25 appearances in League One for the Brewers and went on to join Burnley after he was released by his parent club.

He’s yet to play for Sean Dyche’s Clarets but made 18 appearances for their Under-23s in the Premier League 2 and was named on the first-team bench for the final three matches of the Premier League season. He remains contracted at Turf Moor until 2023.

Having spent the summer without a club after being released by Chelsea on July 1, 19-year-old right-back Clark joined Championship underdogs Wycombe Wanderers in late November.

He’s yet to make an appearance for the club but signed a six-month contract extension following Wycombe’s relegation in May.

Achraf Hakimi next? The 23 players Chelsea have signed from Serie A