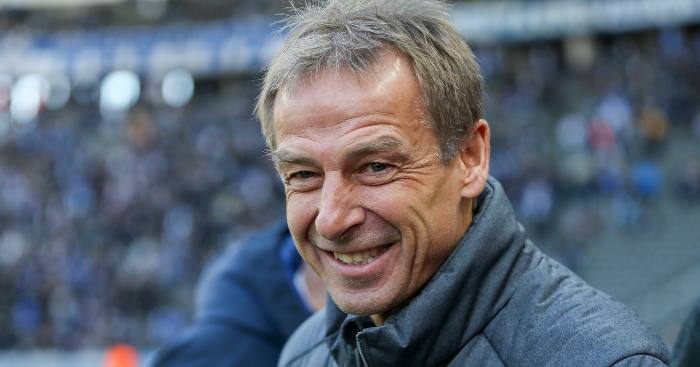 Tottenham hero Jurgen Klinsmann has resigned as Hertha Berlin manager after just 10 weeks in charge – but the German made some huge investments in that time.

They broke a Bundesliga record for their outlay during the January transfer window, yet Klinsmann still didn’t feel backed by the club, claiming he did not have the “trust of all those involved”.

He won just three of his 10 games at Hertha despite spending around €75million in the transfer market during his time in charge.

The Argentina midfielder moved to Germany from Estudiantes in 2017 but couldn’t prevent Stuttgart’s relegation to the second tier last season.

“I’m happy that the transfer has been completed in the winter break,” Ascacibar told the official Hertha website.

“After holding talks with Michael Preetz and Jürgen Klinsmann, I believe I can continue to develop as a player here and that we can achieve a lot together.”

The 22-year-old made five appearances under Klinsmann, losing three games, winning one and drawing the other.

Piatek had an incredible first season in Italy after arriving from Cracovia, scoring 30 goals in 42 appearances for Genoa and AC Milan.

However, the goals have dried up in 2019-20 while Zlatan Ibrahimovic’s return to Milan in January saw Piatek fall down the pecking order.

Despite links with Spurs, the striker joined Hertha for £19.3million and has scored one goal in three appearances so far for the German side.

Krzysztof Piatek is up and running at Hertha Berlin 😎#S04BSC pic.twitter.com/e7fxASm7Db

Hertha broke their transfer record with the £21.1miilion purchase of Tousart from Lyon in January yet sent him immediately back to the Ligue 1 club on loan for the rest of the 2019-20 season

The French midfielder has made over 150 appearances for Lyon since signing from Valenciennes in 2015, but he never got the chance to play for Klinsmann.

“I really identify myself with the ambitions of the club (Hertha),” Tousart told the club’s official website. “What they’re doing here in Berlin is really exciting and I want to be a part of it.”

Cunha won the 2019 Bundesliga Goal of the Year award while at RB Leipzig, but the forward found first-team opportunities hard to come by at the Red Bull Arena.

Hertha bolstered their attacking option on deadline day by spending £12.6million on Cunha, although he is yet to play for his new club.

The 20-year-old has been helping Brazil’s under-23 national team reach this summer’s Olympics, scoring five goals in five qualifying games.

Frankly, we're running out of superlatives 🔥😮