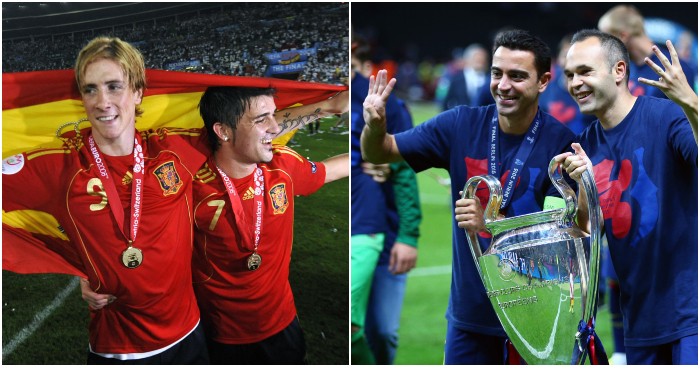 Now plying their trade in Japan, Qatar and the USA, this quartet of Spanish World Cup winners are all finishing their careers in far-flung places. How are they getting on?

Between 2008 and 2012, the Spanish national football team were victorious in three major international tournaments: Euro 2008, the 2010 World Cup and Euro 2012.

That dominance can be attributed to several factors.

Goalkeeper Iker Casillas was at his peak; Sergio Ramos grew from a dependable full-back to the most feared central defender in the world; the reign of Luis Aragonés was followed seamlessly by that of Vicente del Bosque, allowing for a continuity of personnel and playing style.

Above all, however, that Spanish team was brilliant in attack – helped no end by a Barcelona-bred midfield of Andrés Iniesta and Xavi and a deadly strike duo of Fernando Torres and David Villa. With the exception of Villa, who missed Euro 2012 through injury, that quartet played an important role in all three tournament victories.

They are connected by another common thread, too.

While still-active players like Cesc Fàbregas and David Silva can also boast a winners medal from each of those three tournaments, they are still at European clubs. Iniesta, Torres, Villa and Xavi, however, have all made late-career moves to far-flung corners of the world.

Since their respective new clubs and leagues do not receive much international coverage, here’s a quick roundup of the their fortunes since leaving Spain.

The 34-year-old ended his sixteenth and final season with Barcelona in May. But instead of retiring as a one-club man, the midfield maestro made the surprising decision to join Vissel Kobe in Japan.

“This is a very important challenge for me and my career,” Iniesta said upon signing.

At Vissel, the Spaniard follows the orders of club captain Lukas Podolski, who began his own Japanese adventure a year earlier.

Iniesta’s start has been mixed. Although he has scored twice, Vissel have won just three of the eight games in which he has started.

In fact, since his debut in August, the club have dropped six places in the league table, from 6th to 12th.

Last season, the club finished 9th, so Iniesta may have to step up his contribution in order to prove his worth.

Iniesta wasn’t the only Spanish legend to make the move to Japan this summer: his former international team-mate Torres did too.

After three and a half seasons back at Atlético Madrid, 34-year-old Torres joined Sagan Tosu in July, linking up with such reputable stars as Víctor Ibarbo, once a loanee at Watford.

“I have had offers from France, Germany and even one from Spain but at no point did I ever think about going to another European team,” Torres said. “I wanted a new challenge in a completely different place.”

Unfortunately, Torres appears to be wearing his Chelsea scoring boots, not his Liverpool ones.

In 13 league appearances, he has found the net just twice, providing Gary Neville with few opportunities to goalgasm.

To Torres’ credit, his presence has lifted the struggling side: although Sagan currently sit in the relegation play-off zone, their overall average of 1.1 points per game goes up to 1.46 when the Spaniard plays.

At 36 years old, David Villa has surely earned the right to put his feet up. Since 2015, however, the agile striker has been absolutely tearing it up in MLS.

So impressive was his domestic form last season, he even earned a shock recall to the Spanish national squad at the age of 35, playing — albeit only for a minute — in a World Cup qualifier against Italy.

That form has continued into the current campaign.

On Sunday, the final day of fixtures for the MLS regular season, Villa scored his side’s third in a 3-1 win over Philadelphia union. That was his 14th of the season, bringing his strike rate up to a goal every 1.75 games.

The striker, one of the best MLS imports in recent years, will now attempt to lead his side to play-off glory.

Since May 2015, tiki-taka icon Xavi has been plying his trade in the Middle East with Qatari side Al Sadd.

As well as inexplicably winning the lottery in the Arab country, Xavi has enjoyed some success on the pitch, winning three domestic cup trophies just over three seasons.

But he is yet to taste glory in the Qatari Stars League, the top league competition in the oil-rich nation.

Initially, it looked like that ship had sailed: Xavi had previously announced his intention to retire at the end of the 2017-18 season — a campaign in which Al-Sadd finished second — but the 38-year-old ultimately decided to play a little longer.

Now in his fourth season with the Qatari club, the midfielder marked his 100th appearance with his 65th assist earlier in October. He has two in three starts this season.

Excitingly, it could be fourth time lucky for Xavi, as Al-Sadd currently top the table.

David Villa: A man who never arrives too late nor too early