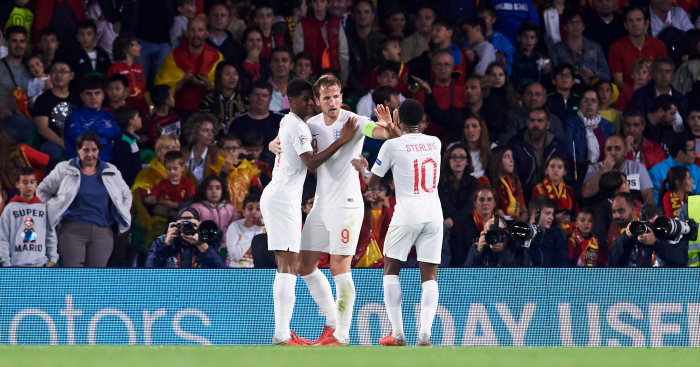 England produced one of their most eye-catching results of recent years with a 3-2 victory over Spain on Monday night – so how did the media rate the players’ performances?

Gareth Southgate’s men were without a win in the Nations League but led 3-0 at half-time thanks to Raheem Sterling’s brace and Marcus Rashford’s composed finish before withstanding Spain’s second-half fightback.

We’ve taken a look at how five publications – The Guardian, The Telegraph, Sky Sports, The Mirror and The Mail – rated the players and calculated an average score for each member of the starting XI.

Pickford showed why he is now established as England’s No.1 as his excellent distribution helped created the opening two goals.

However, he also had some shaky moments in the second half, most notably when he was lucky not to concede a penalty and be sent off after a dodgy Cruyff turn in his own area.

The Mail sum his night up best: “Utterly brilliant in the first half, entirely suspect in the second.”

Jordan Pickford explaining away Spain’s penalty appeal:
“It’s you look back there might have been a little nudge, but I got an elbow in me dish as well” ! Brilliant. 😂😂 #ESPENG #ENGESP #Pickford pic.twitter.com/gzIurRhclk

“Carried on his World Cup form,” write the Guardian. “Blocked, blocked and blocked again, but was accomplished all round.”

The Tottenham full-back was replaced by Trent Alexander-Arnold with five minutes to go.

The Liverpool defender appears to be a favourite of Southgate’s and grew into the game after a slow start. Only the Mail award Gomez lower than an eight.

A testing night for England’s World Cup hero, who was booked, receiving a six from Sky Sports but an eight from the Mail.

Receives an eight from the Telegraph – “a natural on the international stage” – but also a couple of sixes, although each publication praises the Leicester left-back on what was only his second England start.

Given his tackle on Sergio Ramos – which might be one of the greatest moments in an England shirt – we’re not quite sure how the Mail conclude: “A calm head in the heat of the battle.”

Still, this was a good night for the Tottenham man.

Eric Dier vs Sergio Ramos with one of the most fabulously pointless clatterings ever seen. Magnificent. pic.twitter.com/hYfGBTmgdX

Another assured performance in only his second England cap, receiving eights from the Mail and Mirror but just a six from Sky Sports.

The Tottenham midfielder was replaced in stoppage time as Nathaniel Chalobah earned a first cap.

Barkley made his first international appearance in over two years against Croatia but struggled to stamp his authority on the game.

In Spain he reminded everyone of his ability with a beautiful pass which led to Sterling’s second before being replaced by Kyle Walker with 15 minutes to go.

An emphatic finish for his first England goal since 2015, while his second was exactly the kind of goal Gareth Southgate hopes to see more of in the future.

Nines all round for Sterling apart from the Daily Mail, who award the forward an 8.5.

England’s captain may not have troubled the scoresheet but he had a hand in all three goals, including a particularly brilliant assist to play Rashford in for the second.

After two frustrating misses against Croatia, Rashford repaid Southgate’s faith with a brilliant assist for Sterling’s opener and a composed finish for the second.