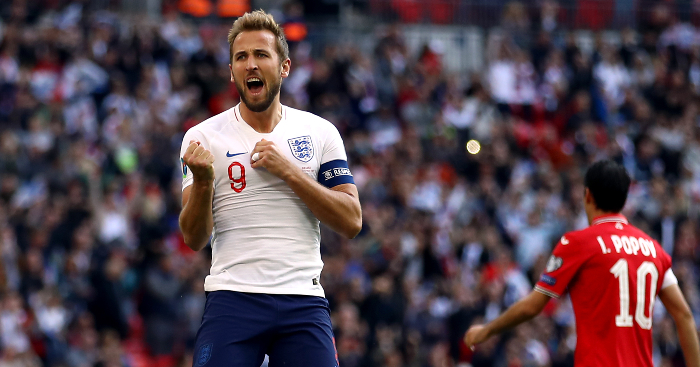 England cruised to a 4-0 victory over Bulgaria on Saturday to keep their Euro 2020 qualification plans well on track.

Harry Kane stole the headlines with a hat-trick in the routine win, as the Three Lions close in on a full decade going unbeaten in qualifiers for the Euros and World Cup.

We’ve taken a look at how five publications – The Guardian, The Telegraph, Sky Sports, The Mirror and The Mail – rated the players and calculated an average score for each member of the starting XI.

Sixes and sevens all round for the keeper, who made four saves on the day.

“Composed and decisive on the rare occasions he was called into action,” wrote Paul MacInnes in The Guardian.

Back on these shores after his summer move to Atletico Madrid, Trippier was the only player from outside the Premier League to feature.

Nothing lower than a six and nothing higher than a seven for a solid performance from the right-back. He touched the ball 124 times – the most of any player on the pitch.

MacInnes dragged down his rating with a five out of ten, while the rest handed out sixes and sevens once again.

“Not asked to do an awful lot but looked the most likely to be troubled if he was,” he wrote. “Booked and gave away a risky free-kick.”

Ol’ Slabhead is now the world’s most expensive defender and England’s most experienced centre-half, but he carried out his duties with little fuss on the day.

Unanimous sixes and sevens for the Manchester United man.

The Tottenham left-back received a five in The Guardian, which was generally more discerning with its ratings than the others.

Tom Hopkinson was impressed enough to give him a seven.

One of the most divisive England players of the modern era, that wasn’t reflected in the media’s player ratings with all agreed he put in a solid shift.

It was actually Declan Rice who tended to split opinion the most, as Sky Sports and The Mirror saw fit to award the West Ham man eights, while The Guardian and The Telegraph went with sixes.

“Possibly a surprising selection ahead of Harry Winks, Rice does not offer the quality of passing of the Tottenham man,” was the verdict in the Telegraph.

“Showed impressive defensive awareness in front of the back four, making more tackles and interceptions than any of his team-mates. Also completed 95 of his 98 passes,” Sky Sports’ Nick Wright begged to differ.

A slight surprise to see him in ahead of his Chelsea team-mate Mason Mount, Barkley didn’t receive much criticism in the press with a tidy display.

“The Chelsea midfielder was erratic at first but grew into the game as England took control,” was the verdict in the Mail.

A goal and an assist for the City man, there looks to be no stopping him at the moment. Everyone awarded him at least an eight, while he got a higher rating in The Guardian than hat-trick hero Kane.

“Playing at a different level from pretty much everyone else on the pitch,” raved MacInnes. “Smarter, faster, more decisive.”

Rashford won the penalty for Kane to slot home, which was enough for the Mail and Mirror to award him an eight, while The Guardian was a bit more critical with a six.

This could well be his one England start until the next set of qualifiers, with Jadon Sancho expected to get the nod next week against Kosovo.

The Tottenham striker’s three-goal tally puts him up there with the game’s greats in terms of total goals, and unsurprisingly it was eights and nines here.

“Kane is well on course to eventually break Wayne Rooney’s all-time record of 53,” noted The Telegraph.

Harry Kane has now scored as many international goals as Geoff Hurst and Marco Van Basten.