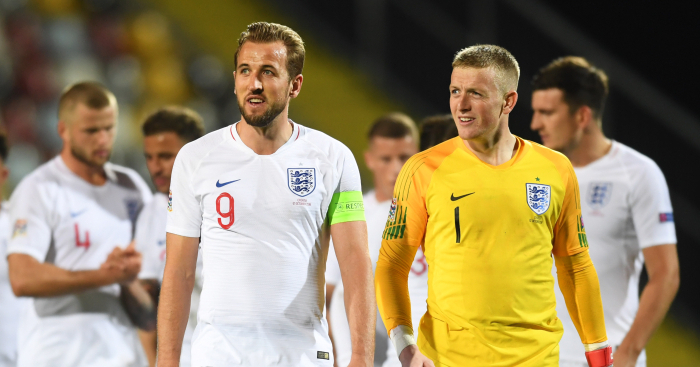 England drew 0-0 with Croatia in the Nations League on Friday night – but how did the national publications rate the players?

The result sees Gareth Southgate’s men remain in second place and five points behind Spain in their Nations League group ahead of their trip to Seville on Monday.

We’ve taken a look at how four national publications – Sky Sports, The Guardian, The Express and The Sun – rated each player in the game and calculated the average score.

The Everton goalkeeper is following on his impressive form from this summer’s World Cup and earned praise for pulling off a couple of good saves to snub the Croatian attack.

The Manchester City defender put in a solid display, according to the press, and wasn’t afraid to run forward with the ball, almost providing assist for Marcus Rashford.

A booking means Stones will miss England’s clash with Spain on Monday but was typically calm on the ball.

“A liability in possession, gave the ball away several times. On the back foot he read the game well,” wrote The Guardian, who awarded ol’ Slabhead a five.

Chilwell put in a Man of the Match display in only his second appearance in an England shirt.

Proud of @BenChilwell. Great performance on his full debut. Also big congrats to @Sanchooo10 on making his debut. 🔥🏴󠁧󠁢󠁥󠁮󠁧󠁿🦁👏

The Tottenham player could well have scored on the brink of half-time, as his header came back off the post.

The Sun deems Henderson the best player on the pitch, while the Express only award him a five. As is typical with Henderson, he polarises those who watch him.

Moment of the game so far. Jordan Henderson, furious about a free kick being awarded, turns around to Croatia head coach Zlatko Dalic and barks: “Are you the ****ing ref?!”

A first England appearance since 2016 saw Barkley make a shaky start but gradually grow into the game. The Chelsea midfielder saw an appeal for a penalty turned down.

“He didn’t get on the ball enough – I know the service wasn’t there for him as it was a scrappy game,” former England goalkeeper Chris Kirkland writes for Sky Sports.

“He struggled slightly. It’s hard to mark him high when he didn’t get much of the ball in dangerous areas.”

The Manchester United striker earned himself some scathing reviews after missing two excellent chances, with the Sun awarding him as low as four. Ouch.

Like Dier, Kane’s night could have felt much more different had a header not come back off the woodwork.