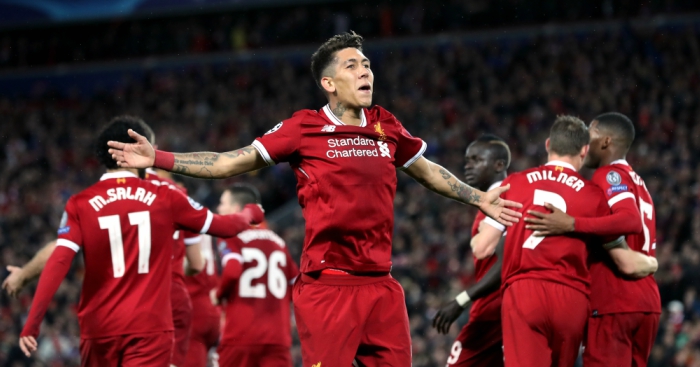 Liverpool put one foot into the final of the Champions League with a dominant 5-2 victory against Roma in the first leg of their semi-final clash.

Roma visited Anfield having produced a stunning comeback against Barcelona in the previous round, only to be blown away by a whirlwind performance from Liverpool.

Braces from Mohamed Salah and Roberto Firmino either side of Sadio Mane’s goal put Liverpool 5-0 up on the night, but Roma did at least pull two goals back through Edin Dzeko and Diego Perotti.

That means they only need to match the 3-0 scoreline by which they beat Barca in Rome to make it to the final.

We’ve taken a look at the player ratings given to the Liverpool players from the Independent, Telegraph, Mail, Mirror and ESPN and calculated the average score given to each individual.

“Made a dogs dinner of Kolarov’s early strike” which cannoned back off the crossbar, write The Independent.

The Reds may have been stunning going forward, but there were still a couple of nervy moments for the goalkeeper.

The youngest Englishman to ever play in a Champions League semi-final continues to impress at the highest level and as grown in stature so much that there are calls for the youngster to go to the World Cup.

Awarded a nine by the Daily Telegraph, the Daily Mail were only sufficiently impressed to give the right-back a 6.5.

Dubbed “a class act” by The Independent, Van Dijk has slotted into the Liverpool defence seamlessly since being made the most expensive defender in history.

All five publications awarded Lovren a seven. The defender hit the bar with a header in the first half and was at fault for Roma’s first goal, but the Croatia international had been dominant at the back until that point.

Like Alexander-Arnold on the opposite flank, Robertson continues to be one of the success stories of the season, and was awarded a nine by the Daily Telegraph.

Perhaps unlucky to concede a late penalty, but the Yorkshire Figo was superb throughout, becoming the first player in Champions League history to record nine assists in a single campaign.

Both the Daily Telegraph and ESPN gave the midfielder a nine.

“Worked tirelessly in Liverpool’s engine room but there was more than just sheer hard work to his display,” commented the Daily Telegraph.

The England international has excelled alongside Milner in the Champions League knockout rounds, earning a nine from ESPN but just a 6.5 from the Daily Mail.

The major disappointment for Liverpool on a brilliant night for the club, Oxlade-Chamberlain had to be stretchered off in the first half after tangling with Aleksandar Kolarov in what could be a major blow for club and country.

Two goals, two assists, and only the curmudgeonly lot at the Daily Mail stopped Salah from scoring a perfect 10.

“He is a genius, full stop,” wrote the Daily Mirror. We’re inclined to agree. 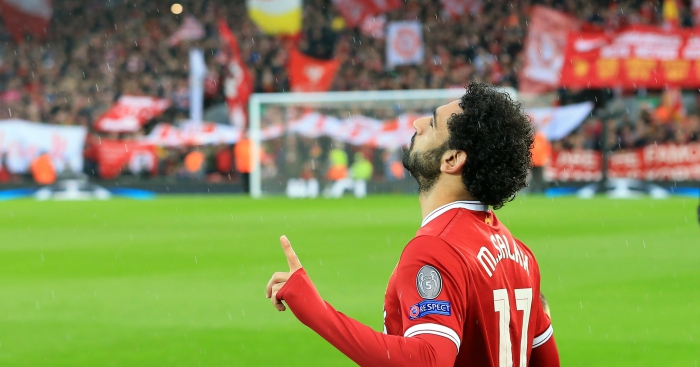 READ: The race for the Ballon d’Or: Comparing Salah’s stats to Messi and Ronaldo

As so often for Liverpool this season, Firmino excelled without grabbing the headlines as he assisted both Salah’s goals and also scored two himself.

That saw him equal Adriano’s record for the fastest player to reach 10 Champions League goals, having done so in just 11 games.

Rather than give the Brazilian a nine, the Daily Mail spoil the fun by awarding him an 8.5. Come on, lads.

A mixed night for the forward, who was guilty of wasting a couple of early chances, but then made amends by bagging the third goal.

Brought on to replace Oxlade-Chamberlain and produced “one of his best performances for the club”, according to ESPN, who awarded the midfielder a nine.

You can probably guess which publication only gave the Holland international a 6.5.