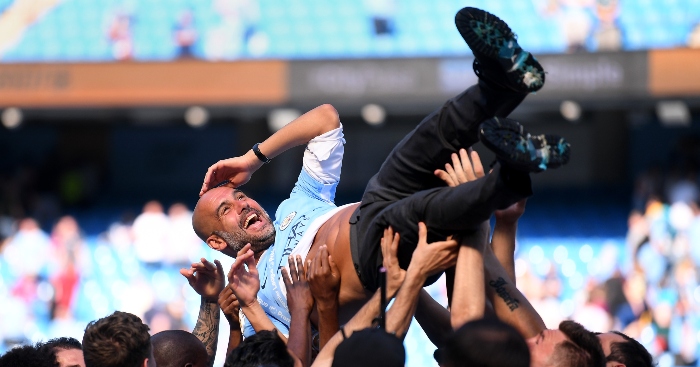 The 2018-19 Premier League season is upon us, and as is customary, the media has been making their predictions ahead of the new campaign.

Journalists and pundits have been called upon to pick out who they think will win the league, who will finish in the top four and who will finish at the foot of the table, among other calls.

We’ve rounded up what the BBC, Sky Sports, Daily Mirror, Daily Mail and our friends at Football365 have predicted ahead of the season opener between Manchester United and Leicester, rounding up 61 opinions in total.

Of the BBC’s extensive list of 24 pundits, 21 think Manchester City will be the first side to retain the Premier League title in 10 years.

All of Sky Sports’ Soccer Saturday pundits think they’ll top the pile again, as do the seven journalists who have given their opinion on Football365.

Of the Daily Mail’s 11 and the Daily Mirror’s 13, almost all have gone for City, though each publication has one who has gone for Liverpool.

Jurgen Klopp’s men were also picked by the other three BBC pundits – namely Ruud Gullit, Ian Wright and Martin Keown – as well as Sami Mokbel at the Mail and the Mirror’s Mike Walters.

Manchester City blew the Premier League away last season. Will they retain the title?#PL pic.twitter.com/T7G09dSHBe

Every single one of the 61 has Manchester City and Liverpool as part of the top four, while Jose Mourinho’s Manchester United were the most popular choice of the rest.

There were 45 votes for Mourinho to keep United in the Champions League spots, but Dion Dublin was the only one from the BBC who said they would break the Liverpool-City monopoly on the top two.

All of the Sky Sports pundits had Tottenham in their top four, with Spurs finding their way into 38 of the pundits’ top four spots.

Of the big six, Arsenal and Chelsea both start the season with new managers, and they were in 20 and 19 top fours respectively.

The BBC and Sky Sports are either only interested in the upper reaches of the division or keen to avoid causing offence, having made no predictions on anything other than the make-up of the top six.

Of the 31 opinions offered in the Mail, Mirror and Football365, not a single one has any faith at all in Neil Warnock’s Championship runners-up Cardiff City, who are universally predicted to make up some part of the bottom three.

Elsewhere, though, there is a wide range of shouts for the other two spots in the lower reaches.

Only Simon Jones at the Daily Mail has either of the other promoted sides to make an immediate return to the second tier, albeit his prediction was made before Fulham took their summer spending past £100million on deadline day.

The most popular choice aside from Cardiff is Huddersfield, with 23 of the journalists struggling to envisage David Wagner being able to keep their love story going any longer than two seasons.

Brighton and Bournemouth are the only other clubs chosen by more than one Mail journalist, while four of Football365’s contingent think Watford will struggle to stay afloat in the Premier League.

Burnley, Leicester, Newcastle and Southampton are the other sides all in danger of going down this season, according to the journalists questioned.

The three publications went into some depth with their pre-season forecasts, and both the Mail and Football365 asked their writers to name their surprise package.

Ten of those 20 journalists went for Fulham, who made five signings on deadline day to add to their already impressive summer recruitment.

Football365’s writers went for a wide range of top scorers, from Harry Kane to Gabriel Jesus, while they are backing Alisson to be the signing to make the most positive impact on their club.

Six of the Mail’s crop think Liverpool will lift a trophy this season, as do five from the Daily Mirror, with David Maddock and Riath Al-Sammarrai the only journalists from their to look outside of the top six, predicting Everton will lift one of the FA Cup and the League Cup.