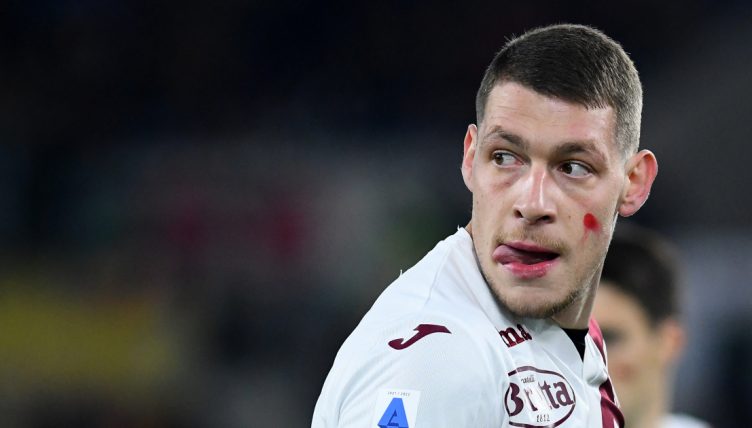 There are few better feelings in Football Manager 2022 than when you manage to snag the perfect player for your team for absolutely nothing.

Your scout brings back the report and you see a sea of green stats in all the right places with a professional mentality and the ‘enjoys big matches’ trait.

But then you see it: ‘Transfer arranged’. Bollocks, you were too late. He’s off to your rivals and there’s nothing you can do about it.

Now you’ve got to spend £30million on a defensive midfielder instead of that inside forward Brazillian wonderkid you had lined up.

So whether you’re pushing for the Premier League title, climbing up the ladder in Spain or trying to put some small Serbian town on the map, here are 10 of the best players usually available on a pre-contract signing in FM22 once the first January window rolls around.

Andrea Belotti’s contract with Torino is coming to an end and, both in real life and in the game, it looks unlikely he’ll be renewing his deal.

He would be just 28 when you sign him and has some incredible stats with 16 in finishing, off the ball movement, and strength making him a versatile option to lead the line.

Ideal for a manager taking their side into Europe for the first time or as a backup to a world-class forward. Give him a three-year deal, upgrade his current salary and he could become a cult hero for you and your club.

This finish from Andrea Belotti 👌

From one end of the pitch to the other, Matthias Ginter is a fabulous centre-back option for most sides in a top-five European league.

If you’re managing a Premier League club you could easily tempt him to move to England thanks to your inflated wage budget, meaning he could be an ideal free upgrade to your mid-table defence and help you push for European spots next season.

With 16 in composure and decisions, he should be good on the ball as well helping you finally feel safe enough to click that distribute to centre-backs command you’ve been wanting to.

We promised players for all types of saves, and Arezo is the ideal signing for your Road to Glory.

Arezo is a 19-year-old Uruguayan striker currently playing for River Plate Montevideo. His contract expires at the end of the 2022 season and he’ll have suitors for his signature far and wide.

In real life, he netted 16 in 29 in the Uruguayan Primera Division and is quietly becoming one of South America’s most exciting youngsters.

With 16 heading and 14 finishing in the game along with a host of other well-rounded stats, he will do a solid job for a wide range of sides, but this could be an ideal signing if you’re trying to win the Champions League from outside the traditional big leagues.

You could sign him and then sell him on to an English club for big money….

…or keep him forever, order a shirt from your club with his name on the back and annoy your mates at the pub by going on about his last-minute winner against Inter in the Europa League quarter-finals.

Is Uruguay's Matias Arezo the next South American wonderkid? ✨pic.twitter.com/D8HO64d24U

From young to old, Kolarov is often available as a free from Inter if he doesn’t retire.

He could be an ideal dressing room figure if you’re trying to get promoted from the Championship and you think you might sneak into the Prem next season meaning you’ll need some experience.

Manage his fitness well and he will reward you, with his 18 free-kick taking sure to give you at least one memorable moment.

Then make him a coach when he decides to retire, because why not.

Zakaria is a player many of the top clubs in Europe will be craving next summer and in FM22 it’s no different.

He’ll have a host of options but act quickly and you may be able to convince him to sign for you and become the beating heart of your midfield.

The Swiss player may want to wait and examine his options, but as soon as you can put an offer in do so and include some competition bonuses as a sweetener.

A tough signing to pull off if you’re not already a giant club, but a rewarding one if you can.

Did you know Bale’s contract at Real Madrid is over at the end of this season? We had certainly forgotten.

The Welshman’s time at Madrid hsa been filled with exceptional highs and bizarre lows with the relationship between him and the Madrid fans never quite mended – but his time will surely come to an end this year.

Thirty-two by the time he would join your club, he isn’t a young man, nor would his wages be cheap, but his stats are still exceptional with standouts including 17 long shots, 17 flair and 16 heading.

Able to play a variety of positions, if you can convince him to cut his wages he could be a standout performer for a couple of seasons. Bonuses and a sell-on clause may be the best way to get him onside.

James Tarkowski is a solid centre-back for any side in Europe’s top five leagues, not just in the Premier League.

Don’t be afraid to take the Englishman abroad to whatever side you’re managing, with the centre-back unlikely to renew his deal at Burnley.

Sign Ginter as well and you’ve got an incredible back two for nothing.

Since joining Bayern in 2017, it’s been a rocky time for French midfielder Tolisso who has never quite established himself in Bavaria.

He likely won’t be used any more in the game by Bayern than he already is in real life, but his stats are worthy of regular game time elsewhere.

Perhaps you’re in France trying to break the PSG monopoly: bring him home as part of your second-season title push.

Football Manager is seemingly in agreement with most of the footballing world that it is time for Lingard to leave Manchester United permanently, with his deal up at the end of the year and the club not likely to renew it.

He would be a first-team player for many sides and if you’re in charge of an English team trying to force its way up the table he would be a quality addition to your squad.

But perhaps you could convince him to join the increasing number of English players who venture further afield? If you’re AC Milan manager you know the club lack funds and could do with the depth as you try to fight for the Serie A and push further into Europe…

One of the best bits about Football Manager is the ability to do things that aren’t realistic but could happen in an alternate universe.

Sturridge’s contract at Perth Glory will come to an end after the first season, so why not pick him up?

You could rehabilitate his career and make him a title-winning hero in Portugal, the striker who fires you from the Championship to the Premier League or, and stay with us here, Daniel Sturridge: Copa Libertadores winner.

Now that is proper FM.