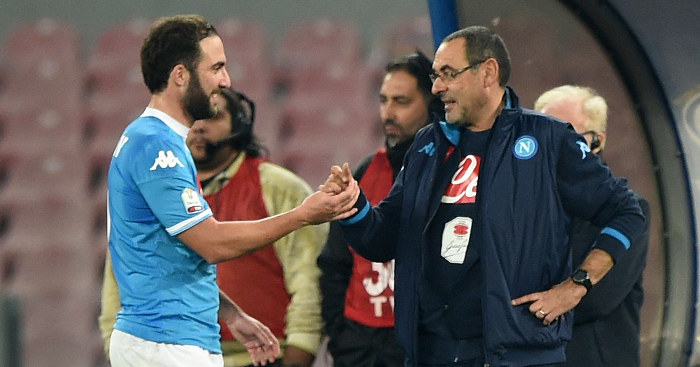 Striker has been a problem position for Maurizio Sarri at Chelsea this season, but in Gonzalo Higuain he will hope he has found the answer.

For Sarri, the system trumps all. In bringing in Higuain on loan, he’s now got a forward that knows it well, having performed exceptionally well for him in the 2015-16 season at Napoli.

Here’s how Higuain fared in the one season he spent under Sarri’s management.

Higuain had already enjoyed two successful seasons in Naples when Sarri joined the club in the summer of 2015. He scored 17 goals in his debut Serie A season and notched 18 the next, with 53 in all competitions across the first two years at Napoli.

His debut season yielded trophies as well, with Napoli winning both the Supercoppa and Coppa Italia with Rafael Benitez in charge.

However, 2015 marked a point at which he was low in confidence and under-pressure.

He had scored two goals as Napoli mounted a fightback against Lazio on the final day of the 2014-15 campaign, a game they needed to win to leapfrog their opponents into the final Champions League qualification spot. But he then missed a penalty (his fourth miss of the season) that would have taken his team ahead as they went on to lose 4-2 and finish fifth.

That summer, he missed a penalty for his country in the shootout against Chile in the Copa America final, shortly after spurning a golden chance to win the match in open play.

A year earlier he’d missed Argentina’s best chance in the World Cup final against Germany, and was forging a reputation as a big-game bottler, unable to step up when it really mattered.

After impressing at Empoli, Sarri succeeded Benitez in the summer of 2015 and instantly starting getting the best out of his star striker.

Speaking to Sky Italia in 2015, Sarri said: “What did I say to Higuain in pre-season? I told him he was too lazy, and if he didn’t change his attitude, he’d never become the best centre-forward in the world.

“He in part agreed with that consideration, as he couldn’t get 100 percent out of his capabilities. We spoke clearly, so this turned into an honest and direct rapport that probably helps motivate him.”

The Italian reportedly introduced an individual rankings system based on how the players performed in training, and Higuain was motivated to see his name at the top of the dressing room leaderboard.

“He is a little hard-headed but you just have to know how to handle him,” Sarri told Corriere dello Sport. Even a great player like he is sometimes needs some advice so that he feels as though someone is on his side.

“Higuain is a very sensitive guy, and up to this point he has been trying to keep up an image that doesn’t really go with his real character. He is not only the best forward in the world, but he is also a man with very genuine feelings that are hidden behind that image.”

The striker himself credits his manager with improving his form, going on record to say “Sarri has given me peace of mind” during their one season together.

After moving to Juventus the following summer, he again had special words for his former boss: “Sarri made me grow and he has been a great coach for me, and if he’s angry about me leaving without saying goodbye to him, then I apologise. I can only thank him.”

It’s difficult to overstate quite how impressive Higuain was during the 2015-16 campaign, but the bare numbers illustrate it well. 36 league goals is the most scored in the history of Serie A, beating Gunnar Nordahl’s record that had stood for 66 years.

Think of the classic Serie A strikers that never achieved such a feat: Zlatan Ibrahimovic, Alessandro Del Piero, Gabriel Batistuta, Ronaldo Nazario, Andriy Shevchenko. None of them were ever even close.

It was double the tally Higuain managed in the previous season and one more than across the previous two seasons working under Benitez.

He might have scored even more had he not received a three-match suspension in the final few weeks of the season, but that wasn’t going to stop him chasing down the record – he snatched it on the final day of the season with a hat-trick, his first of the campaign, against Frosinone.

After scoring the third to clinch the record, Higuain ran over to his manager to celebrate, crediting him with making it happen.

Afterwards, he said: “I thank Maurizio Sarri, absolutely, which is why after the third goal I went to hug him on the touchline. He helped me so much, he always told me what I had to do in order to improve and I always listened.”

Having been unceremoniously forced out at Juventus, followed by an underwhelming few months in Milan, once again Higuain needs a shot in the arm.

There’s no better manager for him to work with to make that happen.