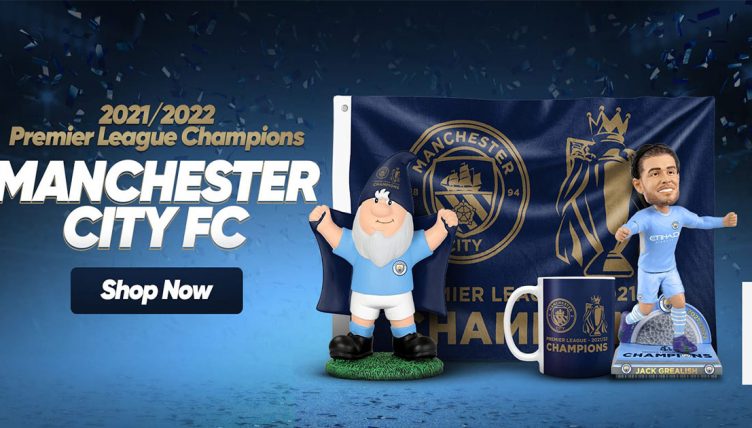 Pep Guardiola has landed his fourth Premier League title with Manchester City – and you can celebrate their success with the newly-launched Champions Collection bundle.

City came from 2-0 down to beat Aston Villa 3-2 on a dramatic final day of the season, securing their fourth title in five years at the expense of Liverpool, who also came from behind to win but ultimately lost out by a point.

And, from bobbleheads to scarfs and flags, there’s something in here for every City fan to celebrate.

You can celebrate City’s title-winning season with this stylish Premier League Champions flag.

The Premier League trophy and club badge are both proudly displayed on this 1.5m x 1m flag.

Every football fan should own a club scarf – and where better place to start than with a title-celebrating one?

The contrasting dark and light blue makes for an eye-catching design that can be worn on both sides.

You can’t go wrong with a mug and this one will be a constant reminder of Manchester City’s success this season.

The blue, white and gold display blends together perfectly as the perfect gift for a City fan.

After a week of celebrating, you can settle down with a cuppa from this Manchester City Champions tea tub mug.

The commemorative championship trophy display is proudly sat alongside the club badge to celebrate a season that won’t be forgotten anytime soon.

If your garden needs spicing up, then look no further.

You can show off your support for Pep Guardiola’s side with this Manchester City handcrafted gnome.

Having contributed eight goals and four assists, Bernado Silva played a vital role in this season’s Premier League campaign – and now you can get his bobblehead.

The 20cm bobblehead is the perfect gift for any fans of the Portuguese playmaker.

Or you can celebrate Manchester City’s record signing with Jack Grealish’s Champions bobblehead.

The hand-painted design has a fantastic level of detail to it that won’t leave you disappointed.

You can celebrate his terrific campaign with his Champions bobblehead.