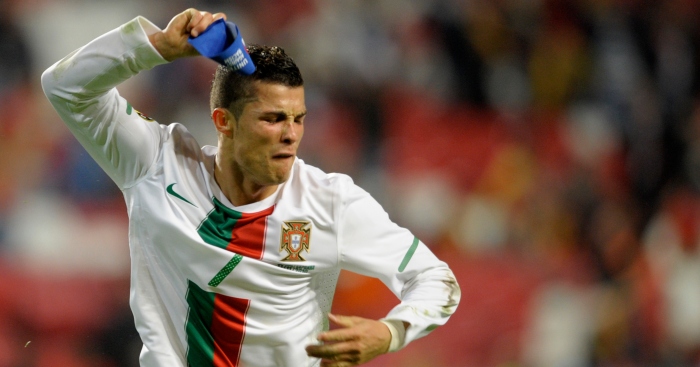 When discussing the best attackers in world football, it will only be a matter of time before the subject of their best goal comes up.

Fans of Lionel Messi will have to choose between his goals against Getafe and Nigeria, while the Cristiano Ronaldo debate will see his bicycle kick against Juventus fight it out against the free-kick for Manchester United against Portsmouth.

The beauty of great goals means you’ll remember them forever, but what about those nearly moments? For many players, what should have been the runaway leader in their ‘best goal’ debate misses out for petty reasons like ‘it was disallowed’ or ‘he missed the target’.

For every memorable goal, there are 10 which could have been just as good, but which you’ve forgotten forever because they didn’t count towards a team’s tally.

Here are 15 of our favourites, some from players with plenty of other great goals to their name, and some which would have undoubtedly been the highlight of that player’s career.

Suárez was unplayable during his time at Liverpool, to the point that there really was no point trying to nullify him.

It was generally better to just let him get things wrong by mere millimetres. Sure, that would leave you running the risk of getting well and truly embarrassed, but chances are that was going to happen whatever you did.

Fair play to Wojciech Szczęsny for deciding not to waste his energy.

Football is prone to butterfly effect-type conversations, and there’s probably an argument for Özil never joining Arsenal if he was able to live off this strike in the Clásico finding the back of the net.

Less than half an hour into the game, with Real Madrid looking to overturn a 2-1 first-leg deficit in the Copa del Rey, he left José Manuel Pinto even more confused than usual, only for the effort to rattle off the woodwork.

Madrid were ultimately eliminated by a single goal and Barcelona would go on to lift the trophy.

If anyone ought to be able to appreciate the beauty of a Real Madrid player pulling off a flicked half-volley on the half-turn, it’s former Madrid goalkeeper Antonio Adán.

But no, Adán just had to turn into Superman for 90 minutes to keep out this sumptuous Bale effort – and everything else Zinedine Zidane’s team could throw at him – to give Real Betis a 1-0 win at the Bernabéu. Selfish of him, really.

Would Dani Osvaldo have still quit football to prioritise his music career if this goal had stood? Yeah, probably, but it’s still special.

Osvaldo was playing for Roma against his former club Lecce when this acrobatic effort flew past Júlio Sérgio, and if we’re being honest we’re a bit miffed the referee decided to apply the rules.

It has taken a while for Gareth Bale to win round certain sections of the Real Madrid powers-that-be, but things might have been different if this shot had flown in instead of hitting the post.

Gorka Iraizoz knew he had no chance the second the ball left the Welshman’s boot, and even he would have had to stand and applaud if the ball drifted a couple of inches to the right.

Cavani’s goal is, for many reasons, the best type of goal. It’s a first-time volley, it’s a bicycle kick, it bounces in off the bar, and it’s against one of the best football sides to ever play the game.

Shame about the offside flag, really.

It says a lot about this goal that a keeper finding the net is the least remarkable thing about it.

A goalkeeper being flagged offside is a rarity, and a goalkeeper pulling off a perfectly executed bicycle-kick is another. Yet Schmeichel’s reaction to the goal being chalked off was so unfussy you’d imagine this sort of thing happens to him all the time.

Back in 2010, Reading pulled off a stunning FA Cup win at Anfield, with Shane Long scoring the extra-time winner, but their eventual victory means one of football’s great nearly moments has been lost in the ether.

This iteration of Rafa Benitez’s Reds might not have been as strong as the version with Xabi Alonso and Javier Mascherano in the middle, but Jobi McAnuff’s ability to blitz past the team as if it wasn’t there remains special. If only he could have found the finish.

Speaking of otherworldly runs, this effort from Lucas will surely have featured on countless ‘Welcome to Tottenham’ compilations, even if the ball didn’t end up in the back of the net.

The Brazilian beats two sliding tackles, each of which feels ready to be replayed over and over for decades of montages, and even produces the perfect calm, dinked finish to beat Steve Mandanda.

If anything, it’s selfish of Rod Fanni to even try to cut it out, let alone pull off the move.

Francesco Totti and Cassano always had a wonderful understanding, and there’s no better example of it than this.

It’s just a shame neither of them could find a finishing touch.

If the Brazilian striker had found the net with this effort, perhaps he’d have graduated from ‘gossip column mainstay’ to ‘actual Tottenham player’.

The defender on the receiving end of the rainbow flick, Emiliano Papa, played just once more for his country after this game. Can you blame him?

Plenty of Gary Cahill’s detractors have claimed the centre-back is better at attacking than at defending, and this moment hardly hinders their case.

Had Jussi Jaäskeläinen not found an extra fingertip on top of his first fingertip, we’d probably be talking about this not just as Cahill’s best goal, but the best by any central defender in the Premier League era.

Griffiths’ matter-of-fact response is almost admirable – it’s as if he’s thinking “Oh, are we not counting goals any more? Fair enough.”

Long before Salah was unstoppable in front of goal for Liverpool, he was literally unstoppable for Fiorentina, darting past everyone before narrowly fluffing his lines with Łukasz Skorupski closing.

In fact, this run was so impressive that Roma made sure to sign the Egyptian in an effort to ensure he could never do it again. It worked… until they let him leave for Liverpool in 2017.

Okay, so if it weren’t for Javier Saviola running in, this shot wouldn’t have gone in. But can we just pretend it went in without needing Saviola? Now what a goal that is.

If you thought the sight of him furious at not receiving a pass was bad, wait until he gets everything right and even begins to celebrate, only to learn his work will go unrewarded. We would say it’s the best thing ever, but…

The idea that Cristiano Ronaldo is angry at this goal being disallowed is a common misconception – he’s actually throwing a strop at Nani’s refusal to simply pull up a seat and watch his team-mate do everything himself.

The best thing about this non-goal? It had probably crossed the line before Nani’s touch, in which case it should have stood.