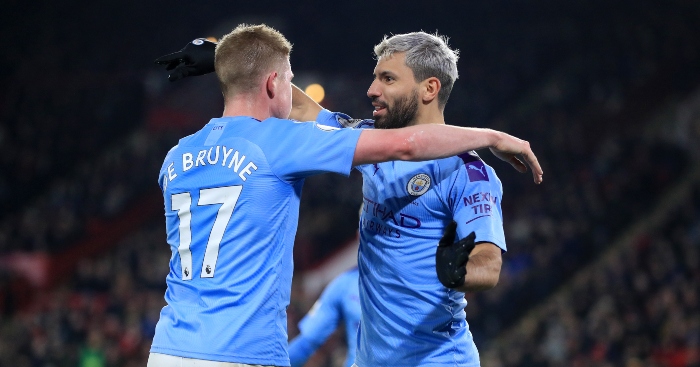 Every team needs a player who creates chances and another who can finish them. If these two players click, there’s little that defences can do to stop them.

Liverpool may be such a well-oiled machine that the combinations can be different for every goal, but not every side has that luxury.

We’ve looked at the players who have combined to score the most Premier League goals so far this season.

Son has stepped up in Kane’s recent absence but the pair are both at their best when they can combine on the pitch.

As well as being a great goalscorer, the South Korean can also create chances for his team-mates and has set set up three goals for the England striker.

Jesus has scored 9 goals this season, but let’s be honest, when you have someone like De Bruyne in your side, it really can’t be that hard. I mean come on, just look at that pass.

Kevin De Bruyne's assist to Gabriel Jesus this week was a thing of beauty.

Easily the best midfielder in the world. 😍🔥pic.twitter.com/KT6drPEwvS

Even if Norwich end up getting relegated, two players that will surely stay in the Premier League or move to another top flight are Cantwell and Pukki.

The striker has scored 11 goals this season and has also assisted Cantwell against Chelsea, Man City and Everton. Given how well they play together, we can only hope they end up in the same team wherever that may be.

Alexander-Arnold’s crossing abilities and Van Dijk’s prowess in the air mean that it won’t surprise anybody to see this combination on this list.

The centre-back has headed home three of Alexander-Arnold’s set pieces so far this season, including the opening goal in Liverpool’s 2-0 win over Manchester United.

"It's the £70m man against the £80m man and the man who was actually cheapest came out on top."

Traore and Jimenez have been two of the brightest sparks in what has been an excellent season for Wolves. The former has seven assists and the latter has 11 goals in the league, making them their club’s top provided and scorer respectively.

The pair have linked up for eight goals in total, with Jimenez assisting Traore for three of them, including the opener in their 2-0 win against Manchester City. The winger’s pace and the striker’s finishing may well be a combo that gets them European football again.

To say it’s been a mixed season for Man Utd would be an understatement, but one positive has been the attacking football displayed by their two young stars, Marcus Rashford and Dan James.

The pair are two of the quickest players in the league, and when they’re in their stride, few backlines can keep up with them. Oh, and James has a helluva cross on him too, which helps.

Yep, De Bruyne’s so good that he shows up in this list on three separate occasions.

One is the league’s best playmaker while the other is one of its best-ever goalscorers. Add in the fact that they’ve played together for nearly five seasons and it should come as no surprise that this is the most regular combination for goals.

While their team have failed to reach the dizzy heights of the previous two seasons, De Bruyne and Aguero have both continued to play their best, and when they’re doing so on the same pitch, there’s a good chance they’ll link up.