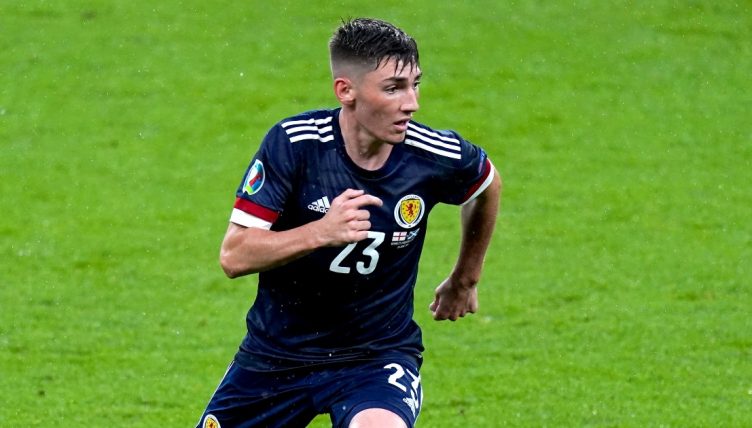 Scotland‘s hopes of reaching the Euro 2020 knockout stage were kept alive by a brilliant collective performance to hold the old enemy England to a 0-0 draw at Wembley on Friday night.

But even in a superb team performance against much-fancied opponents, full of impressive individual displays, it was highly-rated Chelsea youngster Billy Gilmour that shone brightest.

Gilmour was named the official man of the match, and gave the wider world evidence of why he’s been dubbed the Scottish Iniesta.

Emulating Marcus Rashford’s remarkable knack for memorable debuts, the 20-year-old has been awarded the Man of the Match award on his Premier League, FA Cup and Champions League debuts for Chelsea – and he maintained that stunning record on what was unthinkably his first-ever international start, in what was arguably Scotland’s biggest match since they faced England at Wembley at Euro 96, 25 years ago.

We’ve collected together some of the best reactions from Gilmour’s proud compatriots, Scotland’s manager and captain, as well as fans and pundits.

“The kid Gilmour in midfield, he made the difference. He was fantastic. He was always moving, always showing, he wanted the ball, he was turning under pressure. He linked the game much, much better,” the former Chelsea manager told talkSPORT.

“I don’t think there is any risk when you have somebody of Billy Gilmour’s talent,” said the Scotland boss.

“When you put him on the pitch you expect him to do what he did. He held the ball for us and allowed us to play through the midfield. I didn’t think it was a risk for the balance of the rest of the team. We were ready to support Billy in his role and I think we did that.”

“It was nice for Billy to get that start on a big stage and big platform. I have said for a long time, he’s the future of Scottish football, we try to keep a lid on it in the camp but performances like that will do him no harm whatsoever.”

Graeme Souness: "England need a maestro, they need a Billy Gilmour. They’ve got [Kalvin] Phillips and [Declan] Rice – two peas out of the same pod. Billy Gilmour is the best player on the pitch. Never gives the ball away which is fabulous for a midfielder" pic.twitter.com/MJQ8IXIzGv

40 – On his first Scotland start, Billy Gilmour completed more passes than any other Scottish player against England (40), despite only playing 76 minutes. Gilmour is now the youngest player to start a major tournament match for Scotland (20y 7d). Unfazed. #SCO #EURO2020 pic.twitter.com/t7wyaXV65R

The man himself looked pleased as punch. He had every right to be.

"It gives us massive confidence"

Man of the match Billy Gilmour is looking ahead to #SCO must-win game v #CRO after a brilliant display v #ENGpic.twitter.com/gaXTzHBLdP

Pocket of Scotland fans still in Wembley, singing 'There's only one Billy Gilmour'. Guess that's some crumb of relief for England.

Fell in love with this guy when he called it Slice instead of square sausage. What a talent he is, give us it the night wee man 🙏🏴󠁧󠁢󠁳󠁣󠁴󠁿 https://t.co/km7egqoBgS

Billy Gilmour is EVERYTHING #SCO

If Billy Gilmour wasn’t at Chelsea and he still put in a performance like that. Teams around Europe would be sending bids in at full time. Lucky to have him and we can’t waste his ability. #CFC

You’ve got to think, Gilmour has learned quite a bit from Jorginho hasn’t he

Is there room to sign a CM at Chelsea when Gilmour is this good and promising? For me, no.

Such a cute pic Mason Mount and Chilwell with Billy Gilmour after the game 😍 pic.twitter.com/VVxKLNxHOg