The best-selling football shirts on Amazon in 19-20: Liverpool, Arsenal… 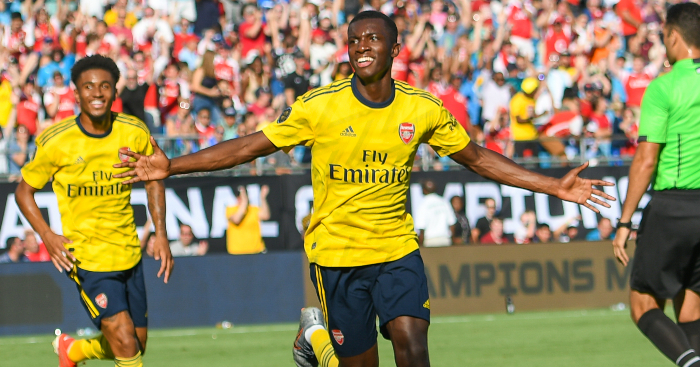 The 2019-20 season will live long in the memory for many reasons – and that means some of the shirts will be inked in our minds for years to come.

We’ve looked at the shirts which were most popular on Amazon over the last 12 months, and there are one or two noticeable trends going on.

Minimalist designs are definitely in, as are tributes to classic retro designs. However, collars still appear to be very much out of fashion.

If there is one club in world football that is associated with style, then it has to be AC Milan.

Milan is a leading fashion capital of the world and those standards have always managed to find their way into kit design too.

The Rossoneri’s 2019-20 effort doesn’t try to do too much other than look great, and that’s exactly what it achieved.

Aston Villa pulled off a memorable escape from relegation, and this was the kit in which they celebrated at London Stadium in July.

It paid homage to a striped variant from back in the mid-90s that used the same colours, although it did quite cleverly tone it down to be slightly easier on the eye.

Nevertheless, it is certainly a memorable kit.

Man City were the kings of the Premier League when they released this shirt and that perhaps went into the design.

After all, how better to introduce a tough of subliminal regality into your look than to add a dash of purple?

It was popular with the fans too, although City still lag some way behind their Manchester rivals in the shirt-sales stakes.

The Citizens tended to favour their rather more garish yellow third kit towards the end of the season over this one, but fans preferred this according to the figures.

Black, crew neck, and with a dash of colour, it’s tough to dislike, although it’s also not the most memorable of kits.

Arsenal fans probably wish their managers, scouts, and physios nailed it as often as their kit designers do. All three Gunners tops this season were a thing of beauty, with their rarely used third strip catching the imagination of supporters.

There is nothing much to it in truth, which is probably the key to its appeal.

If you grew up watching Football Italia on Channel 4 in the 1990s, then Parma are a club that can’t help but make your heart smile.

They are not the consistent contenders they once were when the likes of Lilian Thuram, Gianluigi Buffon, Hernan Crespo, and Faustino Asprilla tore up Serie A in their name, but their kit designers are doing their part to maintain the club’s football fashionista status.

The 2019-20 third strip especially is one that true collectors are going to want to get their hands on.

Man Utd don’t always get it right with changed strips – a point which is highlighted by the absence on this list of their ‘hearing aid beige’ away strip – but their third kit was well-received.

The subtle textured black is not for everyone, but it was sufficiently enjoyed to make it into Amazon’s top-selling kits of 2019-20.

While a Man Utd changed kits can be hit and miss, you get the feeling the Red Devils could release a home kit made of actual toilet paper and it would be a top seller.

The 2019-20 version does stick on the modern minimalist trend, and they opted to stick with the black trim rather than return to their occasional flirtation with white.

The ‘bruised’ Arsenal away strip they wore between 1991 and 1993 is an absolute classic and Arsenal’s modern tribute to it has certainly proven popular with fans.

There is just something that feels right about a yellow Arsenal away kit with a blue trim. It’s impossible to not think of classic Charlie George and Alan Sunderland Wembley moments so it’s rightfully high up on the list.

Absolutely no surprise to see this one top the charts, and you get the feeling it still would have done whether Liverpool had won the title or not.

It paid homage to the classic 1982 ‘Crown Paints’ shirt with the white pinstripes atop a minimalist red background, and it’s hard not to love.

Absolutely fitting, you could say, that this was the shirt in which Liverpool finally ended their Premier League title drought.

The coolest football shirts of the 1990s: My definitive top 10