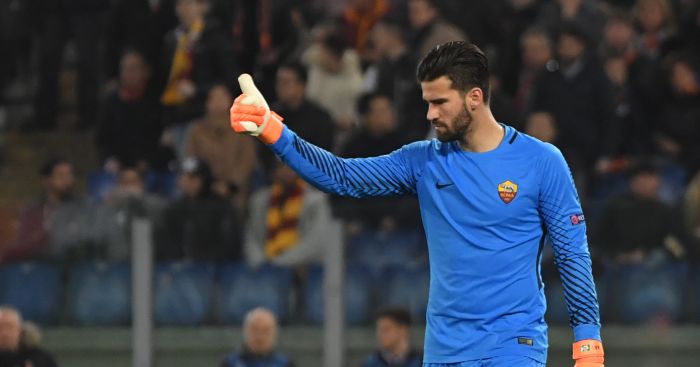 Liverpool have finally secured the signing of Brazil No.1 Alisson from Roma for £66million, a world record fee for a goalkeeper.

Alisson joins Jurgen Klopp’s side on a six-year deal after impressing as Roma finished third in Serie A and reached the Champions League semi-final.

The 25-yyear-old arrives with a lot of hope and expectation, looking to fix a problem area at Anfield where Simon Mignolet and Loris Karius have struggled to convince.

In 37 appearances in the Italian top flight last season, Alisson kept an impressive 17 clean sheets – bettered only by Liverpool goalkeeper Pepe Reina, who recorded 18 for Napoli.

Alisson conceded just 28 goals in total, helping Roma end the season with the second-best defensive record in the division, behind champions Juventus.

Only Karius kept more clean sheets than Alisson in the Champions League, with the German recording six to his new team-mate’s five as Liverpool knocked Roma out in the last four.

Alisson also recorded three clean sheets in five matches at this summer’s World Cup, conceding only in the opener against Switzerland and the quarter-final exit to Belgium.

“The way he behaves in the goal, he reminds me of Dino Zoff,” gushed former Roma goalkeeping coach Roberto Negrisolo.

“I’d also compare him to Michel Preud-Homme, who had the class of someone born to be a goalkeeper.

“I told Alisson when I met him at Roma’s Trigoria ground that he was born for this. He was already strong when he arrived, but has improved even more since he has been in Italy.”

Alisson comes up big! What a miraculous double save ❌❌ on Insigne. pic.twitter.com/1i5k6DLkOB

The most expensive goalkeeper ever

“Alisson? I thought it was crazy to spend so much money for a goalkeeper, but I was wrong. He is a phenomenon.”

Daniele De Rossi expressed his surprise when Brazil’s No.1 moved from hometown club Internacional to join Roma in 2016 – for €8million.

Just two years later, the Italian giants have made a profit of over €50million on the goalkeeper, who Negrisolo also used the word “phenomenon” to describe.

“He is the No.1 of No.1s,” he added. “He is the Messi of goalkeepers, because he has the same mentality as Messi. He is a goalkeeper who can define an era.”

The fee Liverpool have paid for Alisson is almost double the previous highest paid for a goalkeeper – as Brazil team-mate Ederson moved to Manchester City for £35million last summer.

Prior to that, no goalkeeper had cost anyone more than the £33million Juventus shelled out for Gianluigi Buffon back in 2001, and Liverpool fans are expecting a similar return on their investment already.

His tally was bettered only by Atletico Madrid’s Jan Oblak, with David De Gea just behind him but still sub-80%.

In his 49 appearances in all competitions, he made an impressive 155 saves in total, bettered across Europe only by Verona stopper Nicolas.

In comparison, new team-mate Karius made just 58 saves in 32 appearances in all competitions last season.

Another important factor in Alisson’s signing is his renowned distribution, and he ended last season with a 78.9% pass success rate.

He completed 1125 passes last season, which again was beaten by just one goalkeeper across Europe – Gianluigi Donnarumma (1135).

One thing Liverpool have been short of in the goalkeeping department is confidence, with both Mignolet and Karius making a series of errors and neither being able to hold down the No.1 shirt.

“I was stunned by his presence and the calmness he brought to the entire team,” raved Roma boss Eusebio Di Francesco after first seeing the Brazilian in action.

Alisson’s Roma career began slowly, with Wojiech Szczesny in front of him in the pecking order, but he tried not to get too worked up by that.

“I wasn’t playing much due to the coach’s decision but I am a calm boy and I don’t like talking,” he explained. “I didn’t feel comfortable going to him and saying things because he chose to have two high-level keepers and he played me in the cups.

“He used meritocracy because Szczesny had done well during the first year, but let’s say that I learned to have a bit of patience. I worked hard in training and learned a lot alongside a great goalkeeper like Szczesny.”

In his first interview with Liverpool’s official website, Alisson added: “I like to show my ability on the field. I’m not one to show off with words.