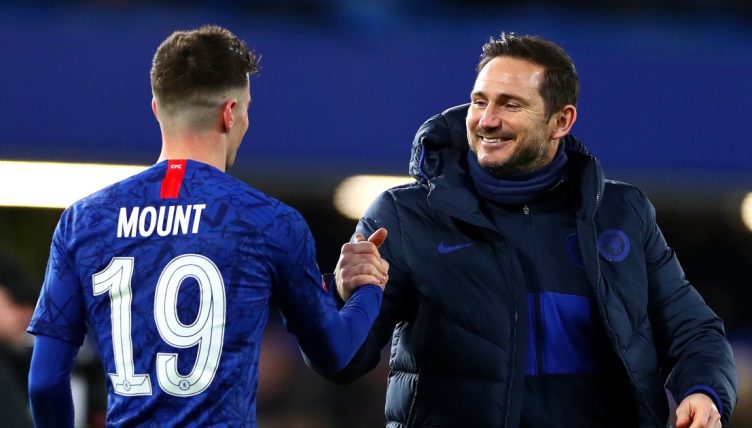 While Frank Lampard didn’t have much success as Chelsea manager, he will be remembered for giving first-team opportunities to some of their young players.

Lampard had to deal with a transfer ban during his first summer in the Chelsea dugout and decided to utilise their impressive academy.

We’ve looked at the eight academy graduates to make their debut under Lampard to see how they’ve fared so far.

After registering 11 goals and six assists under Lampard during his loan spell at Derby County in 2018-19, Mount unsurprisingly followed the manager back to Stamford Bridge.

The midfielder benefitted from Chelsea’s transfer ban and enjoyed a hugely impressive breakthrough campaign with the Blues in 2019-20, establishing himself as one of the first names on the team sheet.

He continued to flourish under Lampard’s successor Thomas Tuchel, setting up the match-winner in the Champions League final and winning Chelsea’s Player of the Year award in 2020-21.

The England international now boasts more than 100 first-team appearances for Chelsea and earlier this year became the youngest player to score 20 Premier League goals for the club.

“I am very proud of Mason Mount but it’s all down to him in many respects,” Lampard told Coral in September 2021. “His quality, his attributes, how he applies himself in training and his work ethic is special.

“He’s building his own story and I am part of that in that I gave him a chance and I’m definitely proud of that.”

Signed from Rangers as a 16-year-old in 2017, Gilmour worked his way through the ranks at Chelsea and came off the bench to make his senior debut against Sheffield United in August 2019.

The midfielder was later named Man of the Match in his first starts in the FA Cup, Premier League and Champions League and even managed to impress Roy Keane.

“He was fantastic,” Keane said after Chelsea’s FA Cup win over Liverpool in 2020. “I was sitting at home having a cup of tea and some chocolate and I didn’t have the volume on, as the game started I literally got out of my seat and said, ‘who is this kid in midfield?’

“There are certain traits you want from a midfielder, obviously quality on the ball, football intelligence, composure, he had everything. It was one of the best performances I’ve seen in a long, long time.”

The Scotland international then burst onto the international scene at Euro 2020, producing another Man of the Match performance in their 0-0 draw with England at Wembley.

But he found it harder to break into Thomas Tuchel’s side and spent the 2021-22 season with an underwhelming loan at Norwich City, before departing for Brighton for a £7.5million fee in the summer.

He was then promoted to Chelsea’s first-team squad by Lampard and made 37 appearances in his breakthrough season, becoming the club’s youngest-ever Champions League goalscorer when completing their comeback in a 4-4 draw against Ajax.

The right-back ended his second season with the Blues with an outstanding performance in their Champions League final victory and has taken his game to another level since then. Very unlucky to miss out on England’s World Cup squad due to injury.

Guehi was handed his senior Chelsea debut by Lampard in a League Cup tie with Grimsby and also played in their defeat to Manchester United in the same competition.

But that 2-1 loss to United proved to be his last appearance for the Blues, and he then spent 18 months on loan at Championship side Swansea City.

His impressive performances in South Wales convinced Crystal Palace to pay £18million for his signature in the summer of 2021.

“I felt like it was the right decision for me to move to Palace,” he told Goal in 2021. “I wanted to play regular football at a high level in the Premier League and test myself to see how far I can go.”

The centre-back has since impressed for Patrick Vieira’s side and has deservedly been handed England opportunities by Gareth Southgate.

Like Guehi, Maatsen also made his senior Chelsea debut in the win over Grimsby, but that remains his only appearance for the Blues.

The Netherlands Under-18 international spent 2020-21 on loan at League One side Charlton Athletic and made 35 appearances in all competitions.

He then linked up with fellow Chelsea academy graduate Jake Clarke-Salter on loan at Coventry City and has made a seamless step up the Championship in 2021-22.

The 20-year-old impressed in the left wing-back spot and is now shining on loan at Vincent Kompany’s Championship-topping Burnley.

During Lampard’s time in charge of Chelsea, Anjorin made solitary appearances in the Premier League, FA Cup, League Cup and the Champions League.

But he only made one cameo appearance under Tuchel and went on loan to Lokomotiv Moscow in the Russian Premier League ahead of 2021-22.

The 20-year-old midfielder made nine appearances and scored a brilliant goal against Marseille in the Europa League before a fractured metatarsal brought his loan spell to a premature end.

He was linked with a permanent move to Southampton in January 2022 but ultimately joined Championship side Huddersfield Town on loan until the end of the season, a move he’s extended for the 2022-23 campaign.

Lamptey was tipped for a bright future at Chelsea and enjoyed an impressive debut against Arsenal in December 2019, helping the Blues come back from 1-0 down to win 2-1.

But the right-back made just two more appearances for the club before rejecting a new contract and joining Brighton in a £4.5million deal in January 2020.

“It was a really tough decision for me to make having been there since a young age,” Lamptey told talkSPORT in 2021. “But after making my debut and the way I did it I felt that I had a taste for senior men’s football and I wanted more of it.”

Despite struggling with injury problems, he is regarded as one of the best young players in the Premer League. He looks set to be named in Ghana’s squad for the World Cup.

Great run and a composed finish by 🇬🇭Tariq Lamptey to make 3-1 against Arsenal.pic.twitter.com/YLypRYcHMJ

Broja came off the bench in the closing stages of a 4-0 win over Everton in March 2020 and is now getting further opportunities for the Blues.

After scoring 11 goals for Dutch side Vitesse Arnhem in 2020-21, the striker earned himself a season-long loan move to Premier League side Southampton. The Albania international did brilliantly at St. Mary’s last season, which has seen him return to the periphery of Graham Potter’s senior squad.

READ NEXT: Where are they now? Andre Villas-Boas’ 11 signings for Chelsea