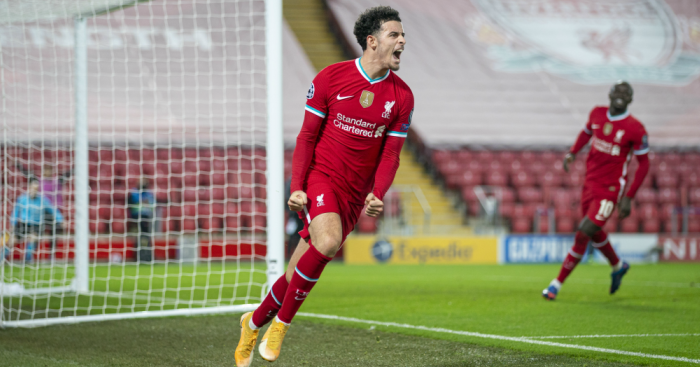 One of the main features of Liverpool‘s season so far has been the emergence of a host of talented youngsters into the first team.

According to FMScout.com‘s list of Football Manager 2021’s 725 Wonderkids, eight are currently on the Reds’ books. That’s defined as “players with high potential ability who are not older than 20 years old on July 1, 2020”.

We’ve taken a closer look at the starlets that Liverpool fans should be getting excited about.

Koumetio arrived at Anfield from US Orleans in 2018 and impressed Jurgen Klopp with his performances in pre-season ahead of 2020-21.

“He doesn’t look like a kid! In my opinion, his face looks like a kid but then all the rest is like, wow,” Klopp said in August.

“I told him, ‘Last time I saw you, you were like 20 centimetres less if I’m right.’ That’s pretty special. Yes, he’s a big talent.”

The 18-year-old made his first-team debut in the Champions League against FC Midtjylland in December 2020, becoming the youngest player to represent Liverpool in the competition. 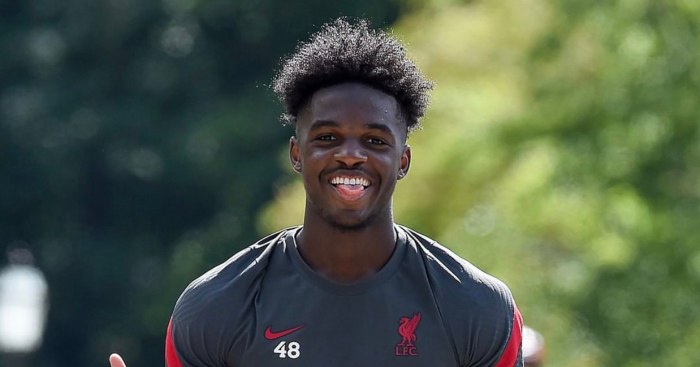 READ: ‘He’s a big talent’ – All you need to know about Liverpool’s Billy Koumetio

Despite enduring a difficult start to 2020-21, the right-back has proved himself to be an able deputy for Trent Alexander-Arnold.

He also made his senior Wales debut in September and scored an injury-time winner on his second international appearance.

Clarkson made his Liverpool debut in December 2020, playing the full 90 minutes in the 1-1 with Midtjylland in the Champions League.

Naming Steven Gerrard as his idol, the young midfielder has had extensive one-to-one training sessions with the Liverpool legend and is known as something of a set-piece specialist.

Jurgen Klopp has compared Clarkson to Phillip Lahm, which is endorsement enough for us.

Regarded as one of Liverpool’s best academy products in recent years, Jones has already established himself as a first-team regular under Jurgen Klopp.

The midfielder has 28 senior appearances to his name at the time of writing, recording six goals and two assists in all competitions.

After becoming the youngest player in Premier League history during his time at Fulham, Elliott has had to contend with some considerable hype.

Liverpool won the race for his signature in 2019, and the winger showed glimpses of his undoubted talent in his debut season at Anfield.

The 17-year-old is spending 2020-21 on loan at Blackburn Rovers and has registered four goals and four assists in his first 14 Championship appearances, including a sensational solo goal against Norwich City.

Upon signing his first professional contract in October 2020, Balagizi was tipped for ‘the very top’ – as shown by his inclusion on The Guardian’s Next Generation 2020 shortlist.

Nabbed from Manchester City’s academy, the 17-year-old midfielder has played in the same England youth team as Jude Bellingham and models himself on elite midfielders like Luka Modric and Kevin de Bruyne.

Time will tell if Balagizi matures into a world-beating midfielder, but he is definitely worth keeping around.

Stewart has been on fire this season, scoring 10 goals in seven under-18 matches.

His ability in front of goal has led The Atheltic to compare the striker to Fernando Torres, due to his pace and knack for scoring goals from all over the pitch.

Liverpool have a rich history of homegrown strikers, from Robbie Fowler to Michael Owen and Stewart could well be the next local goalscoring hero.

Glatzel has been really unlucky in his embryonic career, missing the whole 2019-20 season with an ACL injury.

Born in Liverpool to German parents, he told Goal he was kept in high spirits during that time by conversations with first-teamers Joe Gomez and Alex Oxlade-Chamberlain.

The striker is highly regarded by the coaching staff at Anfield but faces another spell on the sidelines after receiving a new injury in November 2020.

“As some of you may know, I damaged ligaments in my ankle in a game last Saturday,” Glatzel wrote on Instagram.

“This will mean that I will be out of action once again for a while and will also mean that I have to go through the injury rehab process again to get back fit and back to my best.

“As you can imagine I am devastated but sadly it is part of the game and I know that I will get through this.

“I have been here before and will put all my focus and determination into being back on the pitch as quick as possible.”