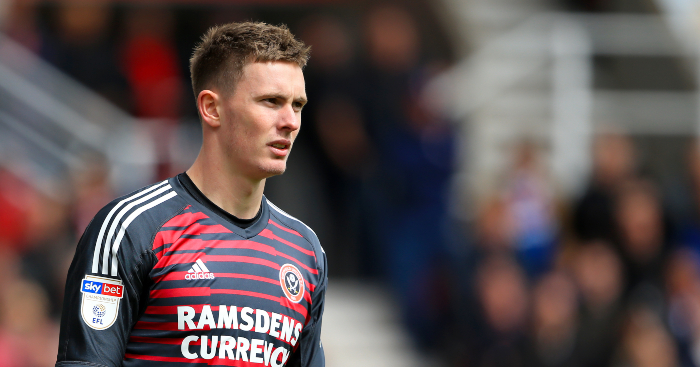 Ole Gunnar Solskjaer has already shown he is willing to put his faith in youth as Manchester United manager – and a number of prospects will be hoping to catch his eye while out on loan in 2019-20.

The likes of Mason Greenwood, Angel Gomes and Tahith Chong have done enough in pre-season to earn Solskjaer’s trust to become members of the first team this season.

And we’ve taken a look at the eight players sent out on loan who have the chance to prove they’re worthy of a first-team place next term.

The first of five goalkeepers on this list, Henderson appears the most likely to make the grade at Old Trafford.

Having become a fan favourite at Sheffield United last season, helping the Blades win promotion from the Championship, the 22-year-old is back at Bramall Lane to get some crucial Premier League experience under his belt.

And Henderson made a promising start to his top-flight career with an excellent save from Philip Billing as Sheffield United started their campaign with a 1-1 draw at Bournemouth.

But, whereas Henderson has gone from strength to strength, climbing up the leagues in five successive loan spells, Pereira’s temporary moves have not exactly gone to plan.

A loan to Vitoria de Setubal last season was cut short halfway through, and he is yet to reach double figures in league appearances for a single club.

The 23-year-old will hope to change that after joining Hearts for 2019-20, and manager Craig Levein is clearly enthused to have the stopper on board.

“I just felt that I wanted to bring in somebody who could go in immediately and calm everybody down and make them feel relaxed defensively which is important,” he said.

“Virtually the same moment I was thinking about all of these things I got a call from Manchester United asking if I was needing anything?

“It is almost like Santa Claus phoning you and asking you, ‘What is it you are wanting again?’”

After enjoying a spell in League One with Rochdale over the second half of 2018-19, Hamilton has returned to the third tier by joining Southend on a season-long loan deal.

The Scotland youth international is a product of Hutchison Vale, the Edinburgh club from which United also signed Darren Fletcher.

Hamilton, also a midfielder, has made it as far as the first-team bench for United in competitive games and was also involved in the tour of the USA ahead of the 2018-19 campaign.

Ethan Hamilton: "I needed to get out and play first team football to keep developing and moving forward and I'm really grateful for the opportunity to be able to come to Southend and do that." #MUFC #SUFC #LoanWatch

Another goalkeeper, O’Hara’s move to Burton Albion represents his seventh loan spell away from Old Trafford.

Having progressed through the age groups at Old Trafford, a season-long loan deal to Morecambe has provided Tanner the chance to play senior competitive football for the first time.

The 19-year-old full-back made his debut in Morecambe’s penalty shootout victory over Mansfield in the League Cup.

Barlow’s progress through United’s academy has been hampered by injury, but the club have still seen enough potential in the 19-year-old midfielder to offer him a new deal this summer.

He has now made the unconventional move of joining Norwegian outfit Tromso on loan for four months, where he will play alongside former Blackburn cult hero Morten Gamst Pedersen.

Is this screamer from Aidan Barlow our Goal of the Month for March? Watch the contenders and vote: https://t.co/WqRoyr12Wm pic.twitter.com/ZW57Wcwpk8

Given the goalkeeper has been sent on loan to Stalybridge Celtic, we don’t expect to see him in United’s first team any time soon.

Given the goalkeeper has been sent on loan to Stocksbridge Park Steels, we don’t expect to see him in United’s first team any time soon.