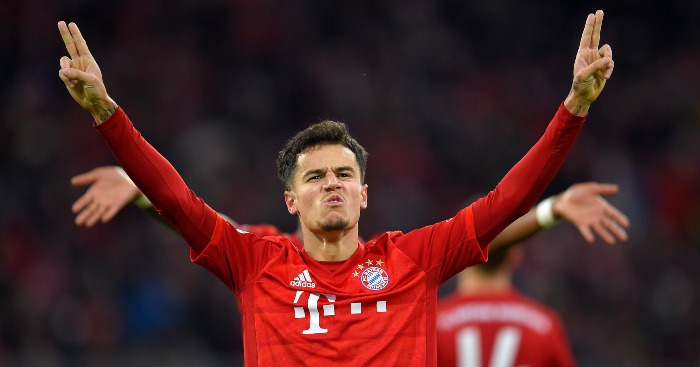 Former Manchester United and Liverpool players are among the most prolific goalscorers from outside the box in Europe’s top five leagues since 2017-18.

Only eight players have scored 10+ goals from outside the box in the Premier League, La Liga, Serie A, Bundesliga and Ligue 1 in that time.

You will not be surprised to learn who is way out in front.

The man who came so close to joining Liverpool is one of four players to have scored 10 goals from outside the box since 2017-18.

The majority of Fekir’s best work in that time came for Lyon, but the attacking midfielder has continued to impress at Real Betis.

How to take a free kick, by Nabil Fekir 🔥 pic.twitter.com/CyMvXu5rCP

The recent scourge of Tottenham, Sabitzer scored twice as RB Leipzig knocked Spurs out of the Champions League with a dominant display across two legs.

Sabitzer’s first came from outside the box, and he has scored 10 such goals in Bundesliga since 2017-18.

Renowned for cutting in from the left onto his right foot, Coutinho’s career may not have panned out as expected since leaving Liverpool for Barcelona in January 2018, but he has still managed to produce some moments of magic.

Philippe Coutinho LOVES a goal from outside the box!

Pure class, what a strike 👏 pic.twitter.com/dHVPnkVcXd

A surprise name to appear on this list perhaps, Mahrez is not exactly known for his screaming finishes but has scored 10 times from the outside of the box since 2017-18.

The second former Liverpool player on this list, Suso has scored 11 goals from outside of the box since 2017-18, the most recent of which came for his new club Sevilla.

The winger joined the Spanish outfit on loan from AC Milan in January in a move that will be made permanent.

“In my time at Milan, I had three Presidents, various coaches and dozens of team-mates. You can’t create anything solid when everything changes each year,” he recently told AS.

Also on 11 goals, Mertens has enjoyed a late-career resurgence as a goalscoring god at Napoli – lighting the touch paper with 34 goals in all competitions in 2016-17.

Amid the turmoil at Napoli over the past 12 months, Mertens was tipped to leave the club once his contract expires in the summer, although more recent reports suggest he could be set to extend his stay.

Dries Mertens… What have you just done?! 😱😱😱

Level with Mertens and Suso on 11, Depay’s tally is made all the more impressive given he has not played since December due to a serious knee injury.

Since leaving Manchester United, Depay has proven himself to be one of the most fun players in Europe. Funny how that happens, innit.

Well who else was it going to be? Twenty-five goals from outside the box in the last three years. It helps when taking a free-kick is the equivalent to most people taking a penalty.