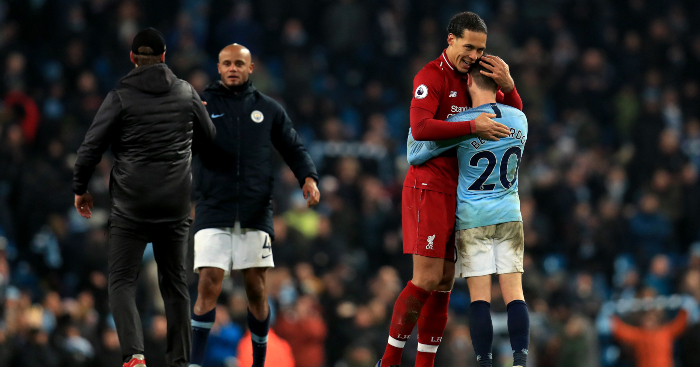 Virgil van Dijk’s status as one of the best centre-backs in the world is illustrated by the fact only eight players have managed to dribble past the Liverpool defender in the Premier League since 2017-18.

A select group of players have got the better of Van Dijk over the last three seasons, but he normally has the last laugh.

Squawka have looked at the eight players who have been able to dribble past the centre-back in the Premier League since his final six months at Southampton.

Van Dijk was still playing for Southampton at this point as Arsenal’s Lacazette managed to beat him in a 1-1 draw in December 2017.

The defender only made one more Premier League appearance for the Saints before joining Liverpool in a £75million deal.

Merino was the first Premier League player to dribble past Van Dijk in a Liverpool shirt, doing so during Newcastle United’s 2-0 defeat to the Reds in March 2018.

The centre-back went the entire 2018-19 season without anyone getting the better of him, but that remarkable run came to an end in August 2019.

Van Dijk was eventually beaten by Pepe during Liverpool’s 3-1 victory against Arsenal in August 2019. But normal service was quickly resumed as the Netherlands international caught up with the 25-year-old and nicked the ball from the forward.

After Van Dijk went 49 Premier League games without being dribbled past, it happened twice in the space of a week in August 2019.

Rodriguez managed to skim the defender in the dying stages of Liverpool’s 3-0 win over Burnley before Adrian came to the rescue.

Silva is one of the most technically gifted players in the Premier League, but Van Dijk probably didn’t lose any sleep over being beaten by the Manchester City midfielder as Liverpool still defeated the reigning champions 3-1 at Anfield.

Alli is yet another skilful midfielder and the 24-year-old dribbled past Van Dijk during Tottenham’s 1-0 defeat to Liverpool in January 2020.

Only eight players have successfully dribbled past Virgil van Dijk in the Premier League since 2017/18:

Richarlison is not one of them. 😉

Neves became one of the select group of players, but Van Dijk had the last laugh as Liverpool beat Wolves 2-1 in January 2020.

Liverpool cruised to a 4-0 win over Southampton in February 2020 so Djenepo probably wasn’t in a celebratory mood despite getting one over Van Dijk.