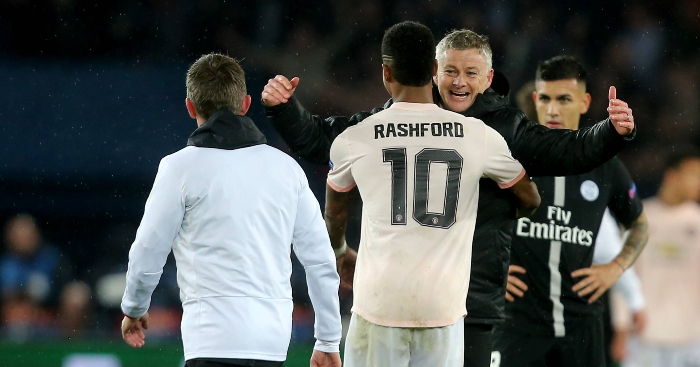 Ole Gunnar Solskjaer set yet more records as Manchester United manager on Wednesday night as they knocked PSG out of the Champions League.

When the draw was made, with Jose Mourinho still in charge at United, the French champions were massive odds-on favourites to qualify at 1/5.

The odds were even more in their favour after winning the first leg 2-0 at Old Trafford, but every week the Red Devils seem to break a record or set a new milestone not seen since the days of Sir Alex Ferguson…

The Champions League has seen some incredible second-leg fightbacks – Barcelona against PSG, Roma against Barcelona, Deportivo against Milan way back when – but they tend to come at home.

Not for Manchester United. Nobody gave them much hope after the first leg, especially with the influential Paul Pogba suspended alongside a raft of other injuries.

Until Marcus Rashford stepped up to take a stoppage-time penalty in Paris, that is.

1 – Manchester United are the first team in Champions League history to progress to the next round having lost by two or more goals at home in the first leg of a knockout match. Incredible. #PSGMUN

With a 3-1 win in Paris, Solskjaer maintained his 100% winning record on the road. Nine wins from nine.

To break any record at Manchester United is impressive, given their history of dominance and success, but to do it so early into your reign, as an interim manager of an apparently broken team, is truly remarkable.

It was already the first time Red Devils had won eight consecutive away games in their entire history, and against PSG that record extended to nine.

That’s all Solskjaer – the last time they failed to win away was Jose Mourinho’s last game in charge, a 3-1 defeat at Liverpool.

It breaks the record set by Alex Ferguson’s side of 2002 – when Solskjaer featured as a player.

Putting trust back in Rashford and Martial, who were in and out of the team under Mourinho, while getting rid of Marouane Fellaini is just one signifier of the more spritely team that Solskjaer is using.

Injuries have forced his hands at times, but he has looked to continue the club’s tradition of bringing through academy products, with Tahith Chong, 19, and James Garner, 17, making their senior debuts against Southampton and Crystal Palace respectively.

And against PSG, Mason Greenwood, 17, became the youngest ever player to appear for United in the Champions League player. Gerard Pique had previously held the record.

All of United’s goalscorers looked frustrated and shot of confidence in the final days of Mourinho’s reign, and their goalscoring records reflected that. But all that’s changed now.

Solskjaer’s arrival prompted a flurry of goals, with United scoring two or more in five consecutive games for the first time since April 2008.

And in the win at PSG, Romelu Lukaku became the. first United player to score 2+ goals in three straight games since Cristiano Ronaldo in December 2006.

The Belgian has had to bide his time to get into the team under Solskjaer, but he’s stepping up now and benefitting in the same way as the likes of Marcus Rashford, who had scored just one goal in his last 10 Premier League games before Solskjaer was appointed but then scored five in his first six under the new manager.

And Paul Pogba’s output rivals any midfield player in Europe since his new manager took over, with 10 goals and seven assists from his 15 games under Solskjaer.

The Frenchman has been directly involved in more Premier League goals than any other player since Solskjaer took charge and has also now scored 10 league goals in a single season for the first time in his career. 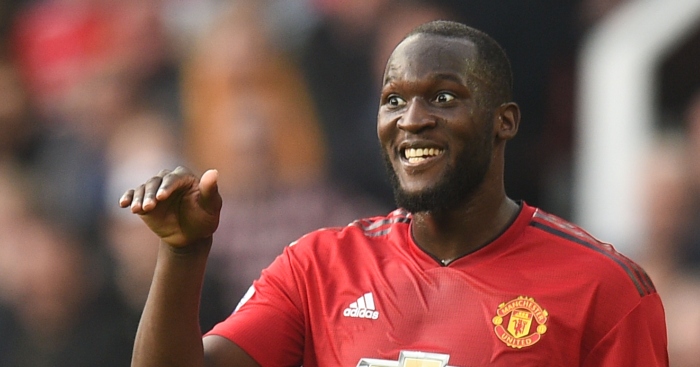 READ: Manchester United’s Romelu Lukaku has the makings of a £75m cult hero

After replacing Mourinho, Solskjaer became the first United manager to win his first eight matches in charge, beating the previous record of five, set by Matt Busby in 1945.

Not only that but he equalled a Premier League record of winning his first six matches, putting him alongside Pep Guardiola and Antonio Conte, and has since extended his unbeaten start in the league to 12 games, equalling Maurizio Sarri’s record from the start of the season.

Manchester United have won more points than any other team in the Premier League since Solskjaer took over, with 10 wins and two draws so far.

Watch: Romelu Lukaku and Paul Pogba take p**s out of The Sun after win