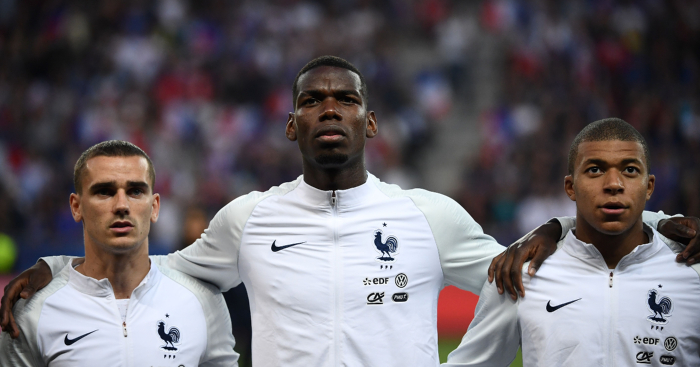 France’s 2018 World Cup team is the most expensively-assembled squad heading to Russia, with England’s ranking fifth, according to research.

The findings from BonusCodeBets.co.uk, which analysed market estimated transfer values of the 23 players selected to represent each nation in Russia, found that the French squad is valued at an eye-watering £914.9million.

According to the study, high-value players including Harry Kane, Dele Alli and Raheem Sterling make England’s 23-man line-up worth a healthy £786.6million, which is £76million more than the Belgium squad featuring Eden Hazard, Romelu Lukaku and Kevin de Bruyne.

The top five most expensive squads at the 2018 World Cup are:

Comparatively, Panama’s squad (the cheapest in the tournament) is valued at only £8.5million – just 0.9% of the cost of the French squad.

The five cheapest teams in this summer’s competition are:

While the likes of the Spanish, German and French sides are made up of a whole host of similarly-valued stars, Egypt display the biggest disparity between the average squad value and the price of their star player. Mo Salah’s £135million price tag makes up 76% of the total value of the Egyptian national team.

Tottenham’s Heung-min Son also makes up a large proportion of his side’s total worth, racking up 59% of the total bill for South Korean players.

Nations with a significant proportion of players from Premier League clubs are likely to have the highest value.

The average cost for a Premier League player heading to Russia is £28.1million, with La Liga’s World Cup stars worth an average £27.9million.

Surprisingly, Chinese Super League players have a higher average value (£16.8million) than those playing club football in Serie A (£15.3million).

The five most watched players on YouTube in different countries