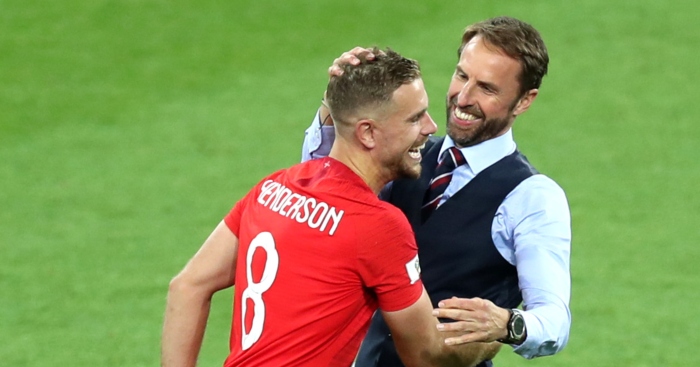 Jordan Henderson has received plenty of criticism over the years, but after a fine season with Liverpool he’s now all-but completed his turnaround in reputation courtesy of his performances for England at the World Cup.

Henderson has acted as the midfield fulcrum in England’s attacking system, playing in every game bar the academic defeat to Belgium in the group stages.

The former Sunderland youth product has broken an England record in the process, setting the longest unbeaten run for a player ever, with 23 wins and seven draws from his last 30 international appearances.

Brendan Rodgers has tried to claim some of the credit, claiming it all started when he made the midfielder Steven Gerrard’s successor as Liverpool captain, but in truth Henderson is still winning over his critics today.

Here’s a reminder of how he’s progressed over these past 12 months.

Henderson is a bad footballer. There. I said it. He has terrible awareness, poor reactions, average touch, average passing ability, awful finishing, can’t keep the tempo, can’t dictate the game.

How long is Klopp going to keep up the chairty for him? It’s embarassing. #LFC

After a strong start to the season, Henderson picked up a hamstring tear in the early stages of a 3-3 draw against Arsenal in December, ruling him out for four weeks.

The Liverpool captain had missed only one match prior to that, but having failed to make over 25 Premier League appearances in the previous two campaigns, question marks were once more raised over Henderson’s fitness, with This Is Anfield labelling it “an alarming record”.

And the doubters were not silenced as Liverpool thumped Swansea 5-0 in Henderson’s absence, with Philippe Coutinho taking temporary stewardship of the armband. And there was a similar outcome in the Champions League as Coutinho led the Reds to a 7-0 victory against Spartak Moscow.

Praise was also rife for Emre Can, in a run of games which also included an FA Cup Merseyside derby win and the pulsating 4-3 victory over Manchester City in the Premier League, though some supporters did note that the side earned just one clean sheet from eight outings without Henderson.

A return to action, and to praise

After Henderson made a brief appearance in the FA Cup defeat to West Brom, he started and controlled the midfield as Jurgen Klopp’s side defeated Huddersfield by three goals to nil in January 2018.

It meant Henderson had led his side to two clean sheets in his last two appearances – after six matches without and 10 goals conceded in the process.

The midfielder’s return to the side then led to a run of eight clean sheets in 10 matches, with Klopp in particular dishing out the praise to his skipper.

“Jordan Henderson is a very good footballer,” he said after the Huddersfield victory. “He is an England international player and for us our skipper.

“How can he not be a brilliant player when he is a Liverpool player? If somebody doesn’t see his value, what can I do? For me, it is quite difficult to talk about the obvious things.”

Klopp On Jordan Henderson: “I don’t know why or even if people are not happy with Jordan, he’s a fantastic player. He didn’t prove this to me at Huddersfield, I knew this before. Really fantastic player and a fantastic lad."#LFC #KloppPresser pic.twitter.com/zMv7HhcwRe

Best game in a Liverpool shirt

The aggression, urgency and passing prowess displayed in England’s World Cup campaign is nothing new for Henderson.

After their outstanding 5-2 victory over Roma in the Champions League semi-final, a video of the midfielder’s contributions was shared around social media, with fans around the world gushing over a fine individual performance.

Praise went as far as supporters calling it his best game since joining the club.

Henderson became the centre of Twitter’s attention for the right reasons as England racked up a 6-1 win over Panama in the second group stage game at the World Cup.

The midfielder had 7.1% of the game’s possession all to himself, while he also made three successful tackles – with Fabian Delph the only other England player making more than one.

He also drew attention as he covered over 10km in the match which many saw a breeze, continuing his pressing and high-tempo style right until the dying minutes of the comfortable victory.

Seen passing instructions between Kieran Trippier and John Stones just seconds before the central defender converted his second goal from a well-worked free-kick saw him receive praise for being a key figure of leadership among the squad.

Frank Lampard said: “With Jordan Henderson I wasn’t properly sure what kind of midfielder he was a couple of years ago, he was a bit of an all-rounder.

“But he’s certainly a leader, he’s matured on and off the pitch and he’s used real intelligence to take that role. He’s got great drive in him.”

Jordan Henderson was quality again today. Still closing down in injury time, he just never ever stops working for the team. Still a little underrated for club and country, having a great 2018 long may it continue.

“Jordan Henderson was excellent,” said Alan Shearer, as the BBC pundits gushed over the midfielder. “There was such a drive in his performance. He covered everywhere.”

“I think Jordan Henderson’s stock has gone up,” Rio Ferdinand said. “He proved he can play it forward and he’s done it better than anyone else today. The defensive work; the ground he covered, was phenomenal.”

“He’s played a brilliant World Cup – very mature, a proper leader in the team and you can see it,” Liverpool boss Klopp later added. “Everyone can see this team is offensively really skilled, so you need a few serious people in the team to keep it all together.

“I like how he is doing that and is still involved in all the offensive things, set-pieces and all that stuff. He’s played a few wonderful passes, controls the game.”

“There’s a reason every manager he works with picks him,” said former boss Rodgers. “You always knew you were going to get work rate and intensity with Jordan.

“He could give you good energy in the central area. His running power is a great strength, and when you do not have the ball he has a great hunger to press the game.”

Jordan Henderson here has been overlooked due to Pickfords mad save. Blocks the shot, chases the geezer down and then celebrates like a loon after clearing it pic.twitter.com/MIfkHtdqUt