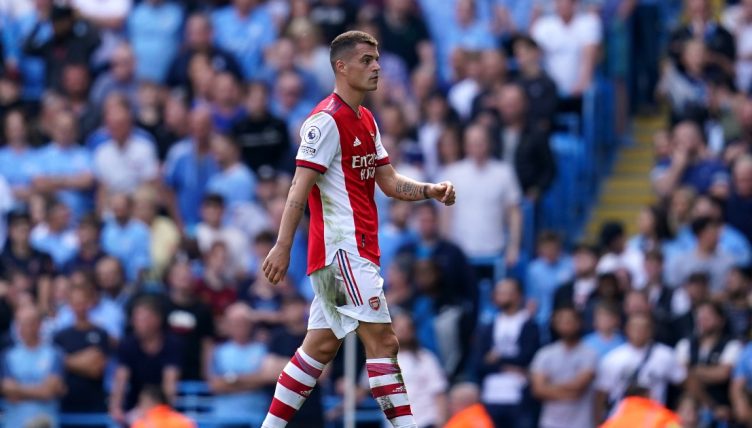 He may be a beloved figure at the Emirates these days, but Arsenal fans have had an often complicated relationship with Granit Xhaka.

Yes, Xhaka is a bundle of energy in the Arsenal midfield and regularly proves his technical class. Arsenal often look lost without him in the side.

But the Switzerland international has a well-known self-destruct button and he isn’t afraid to use it.

Since moving to England in 2016, Xhaka has been sent off on five occasions, the latest coming in Arsenal’s EFL Cup semi-final at Liverpool back in January.

And, while the midfielder has undoubtedly raised his game in recent months, we can’t help shaking the feeling that disaster is never far away.

We’ve remembered those times Xhaka has been dismissed during his spell at the Emirates.

Xhaka’s first red card for Arsenal came in a 3-2 victory over Swansea – just seven matches into his Premier League career.

Arsenal were just about clinging onto their lead when the midfielder was shown a straight red card by Jonathan Moss for a reckless lunge on Moudou Barrow.

All of the hallmarks of future Xhaka brainfarts were there; heart ruling over head, a needlessly reckless challenge and a refusal to allow something as trifling as game management stop him from settling scores.

“He is not a dirty player at all, but is sometimes clumsy,” Arsene Wenger said after the match. “He is not a natural defender. He is a guy who likes to play forward, and Barrow made a lot of it as well.

“Because he was gone, the referee saw a bad tackle. It is what it is, he has to learn from it. Intelligence means that you do not make the same mistake twice.”

Loool anyone remember when Xhaka got a straight red for this tackle in the Swansea half because he “didn’t attempt to play the ball” and then they never mentioned that rule ever again?? pic.twitter.com/VFFTr0OCOa

It wasn’t long before Xhaka suffered another rush of blood to the head.

Arsenal were leading Burnley 1-0 when the Switzerland international decided to go in two-footed on Steven Defour. Xhaka was attempting to win back possession after giving the ball away to his opposite number, but his challenge was rash and deemed unsafe.

It looked like costing Arsenal victory after Andre Grey equalised with a last-minute penalty for Burnley. But Alexis Sanchez was able to score an even-later winner to spare Xhaka’s blushes.

There seems to be something about Burnley that rubs Xhaka up the wrong way – perhaps he has an aversion to meat pies, bleak weather and chip barms – but his dismissal against the Clarets last season was another level of stupidity.

Xhaka grabbed Ashley Westwood by the throat after a minor skirmish saw Arsenal’s resident hothead completely lose his cool during the relegation six-pointer.

And Mikel Arteta’s side went on to lose 1-0 following a spectacular own-goal from Pierre-Emerick Aubameyang.

“We know that these things [Xhaka’s red card] are unacceptable and the moment that we are in now it’s even more so,” Arteta told BBC Radio 5 Live after the game.

“Complete dominance from the start to the moment that Granit Xhaka was sent off. Created all the chances, pressing, the attitude of the players was amazing the way we played in moments it was really good.

“They are really willing and probably too willing in key moments we overstepped the line and got a man sent off.”

It was certainly hard to justify his brainlessness on this occasion.

With Arsenal already trailing Manchester City 2-0, Xhaka decided to make his side’s task even more difficult with a minor assault on Joao Cancelo.

The midfielder flew into a challenge with studs showing once again and gave referee Martin Atkinson no option other than to show him his marching orders.

Rooted to the bottom of the Premier League without scoring a goal, Xhaka’s dismissal was treated with dark humour by the travelling Arsenal support – the only other alternative would have been crying and things were far beyond that.

“That’s 11 red cards in his career, you can’t excuse this,” Alan Shearer said on Match of the Day that night.

“All he’s said to his team-mates is ‘sorry you’re on your own I don’t feel this today’. Who he’s trying to impress? I don’t know.

“You cannot tackle and go in like that, we all know the rules. He’s putting his opponent in danger.

“Arteta will be raging at that tackle. You’re up against it anyway, you can’t afford to do that kind of thing.”

🟥 Granit Xhaka is sent off for a reckless lunge on João Cancelo.

The correct decision according to Peter Walton. pic.twitter.com/dDDPsZCqyr

We’re giving Xhaka the benefit of the doubt on this one.

On first viewing, this is another rush of blood to the head as Xhaka attempted to stop Diogo Jota with a kick that would’ve been deemed illegal in most martial arts.

But the 29-year-old had to do something to prevent Jota from having a clear run on goal. It looked like an honest attempt for the ball but there’s no doubt it was a foul and a goalscoring chance.

Arsenal showed some uncharacteristic defensive resilience to secure a 0-0 draw in their first leg at Anfield – but Xhaka’s suspension was one reason why the Gunners’ next match at Tottenham was postponed.

READ MORE: Where are they now? Arsenal’s last 24 January signings