The four times Jurgen Klopp has masterminded victory at Bayern 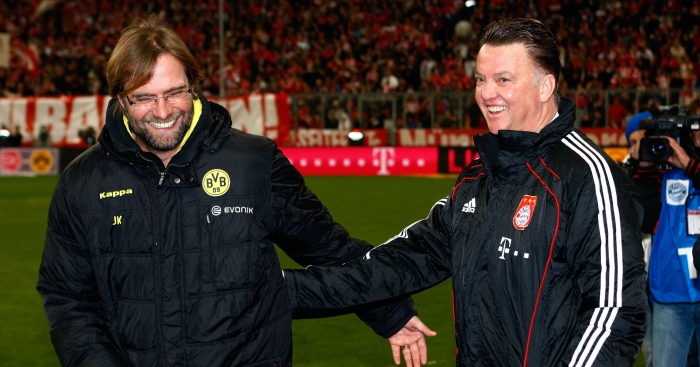 A rivalry with Bayern Munich has been a consistent theme throughout Jurgen Klopp’s managerial career, and that will continue when he takes his Liverpool side to Bavaria with their Champions League clash finely poised at 0-0 after the first leg.

Klopp regularly locked horns with Bayern during his spells as Mainz and Borussia Dortmund boss, with the latter having a particularly fiery rivalry with the German giants.

Liverpool are the outsiders to progress on Wednesday night, but we’ve taken a look back at every time Klopp has masterminded a victory at the Allianz Arena to see if there are signs of encouragement for the Reds.

Klopp was already well on his way to guiding Dortmund to a first Bundesliga title since 2002, and this result played a major role in cementing their place at the top of the table.

A frantic opening 20 minutes saw Dortmund take the lead through top scorer Lucas Barrios in the ninth minute, only for Luis Gustazo to equalise shortly afterwards.

It took the visitors just two minutes to restore the lead through a superb goal from Nuri Sahin, which he celebrated by running into the arms of Klopp, and Mats Hummels wrapped up Dortmund’s first win at Bayern in 20 years with a header on the hour mark.

“It doesn’t get any better,” Klopp said of Sahin’s strike. “It was a huge day for us because they were watching in 198 countries. We wanted to play a special game and we succeeded. I am extremely happy.

“Dortmund didn’t win in Munich for 20 years. Sebastian Kehl was 11, and the rest of the boys were still being breast-fed.”

Klopp would successfully lead Dortmund to back-to-back titles, but when he took his side to the Allianz Arena they were trailing Jupp Heynckes’ side by five points in the league.

In a tense encounter, Dortmund produced a performance which encapsulated Klopp’s philosophy, with the intensity of Sven Bender in midfield particularly noticeable.

German outlet Süddeutsche Zeitung described BVB’s pressing as “like a school of fish, changing direction without any audible orders”, which set the platform for Mario Gotze to steal all three points with a clever second-half finish.

“In terms of maturity, this was a quantum leap for us,” Klopp said afterwards. “It wasn’t quite heavenly football, but we defended heavenly.”

After those consecutive titles, the balance of power in German football began to switch back in favour of Bayern, now managed by Pep Guardiola and aided by a number of Dortmund’s stars jumping ship to their great rivals.

But that didn’t stop Dortmund inflicting Bayern’s first home defeat for almost two years with a dominant performance secured thanks to goals from Henrikh Mkhitaryan, Marco Reus and Jonas Hofmann.

“A brutally good team performance” was Klopp’s straightforward assessment, but they would ultimately go on to finish runners-up to Bayern in both the league and cup.

Klopp’s final season at the Westfalenstadion would end in disappointment as Dortmund finished a lowly seventh and were also beaten in the German Cup final.

But that cup run did involve one final victory over the Death Star in the semi-finals, albeit secured on penalties.

Bayern took the lead through former BVB striker Robert Lewandowski in the first half and had plenty of chances to increase their advantage, but Dortmund equalised with 15 minutes to go through Pierre-Emerick Aubameyang.

Despite losing Kevin Kampl to a red card in extra-time, Dortmund held on for penalties to see Bayern miss all four of their attempts – including one from Gotze against his old club – meaning they only needed Ilkay Gundogan and Sebastian Kehl to convert their spot-kicks for victory.

“I did not expect such a game,” Klopp said. “I wanted us to play with more courage in the first half and I told my players that it is okay to lose here but not with this nonsense. Let’s go down fighting.”