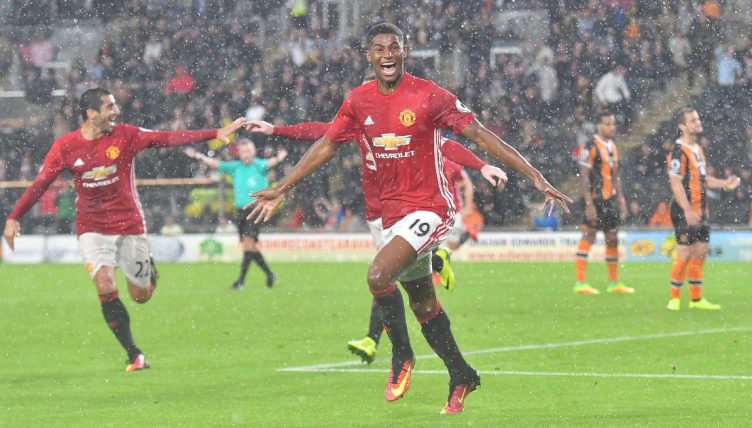 Manchester United are renowned for scoring late goals – and Marcus Rashford has helped maintain that tradition in recent years.

No player has scored more injury-time winners in the Premier League than Rashford, who has already netted four for his boyhood club.

We’ve taken a look back at Rashford’s match-winners that have come after the 90th minute in the Premier League.

After enjoying a brilliant breakthrough season under Louis Van Gaal in 2015-16, Rashford had a difficult start to the following campaign under Jose Mourinho.

He came off the bench in the Community Shield win over Leicester and was then an unused substitute in their first two Premier League games in 2016-17.

The winger was named on the bench again for their trip to Hull but was brought on in the 71st minute as United looked to break the deadlock.

He made a huge impact and got on the end of Wayne Rooney’s cross to tap in from close-range in the 92nd minute, sparking wild celebrations in the away end.

“A big smile and a big hug is enough!” Mourinho told BT Sport when asked how he would greet Rashford following his goal. “Marcus is working extremely well and both times when the team was in trouble and needed one goal.

“The Community Shield with the score at 1-1 and today when the score was 0-0 he came on and gave a special contribution. Everybody is speaking about him and Ibra – they can play together as they showed today.”

United endured a difficult start to the 2017-18 season, winning just five of their opening 10 Premier League games before facing Bournemouth at the start of November.

Rashford had scored just one league goal by this point of the season and was named on the bench against the Cherries, with Alexis Sanchez starting upfront.

Bournemouth took a deserved lead through Callum Wilson in the 11th minute before Anthony Martial netted an equaliser just before half-time.

Rashford replaced Juan Mata in the 56th minute and missed a great opportunity to score a few moments later when his shot was blocked by Nathan Ake.

But the England international made amends in the 92nd minute, firing home from close range to secure all three points for the away side.

United needed a win over Wolves at Old Trafford in December 2020 to move up to second in the Premier League table but they were frustrated by the away side.

The game appeared destined to end in a goalless draw until Bruno Fernandes picked out Rashford with a brilliant pass in injury time.

Rashford then cut inside and let fly with a left-footed shot that deflected off Romain Saiss and nestled into the back of Rui Patricio’s net.

It was United’s latest winning goal in a Premier League game at Old Trafford since September 2009, when Michael Owen scored against Manchester City.

Rashford endured another tough spell in 2021-22 and was heavily criticised for his performance in an FA Cup win over Aston Villa.

But he came off the bench to score in a 3-1 win over Brentford in January 2022 and produced another impressive cameo appearance against West Ham a few days later.

After Edinson Cavani crossed the ball across the face of the goal in the 93rd minute, Rashford fired home the winner with almost the last kick of the game.

“It is obviously an important goal and [to score so] late on is an amazing feeling,” Rashford told the BBC after the game.

“We have to use that winning feeling. We could have been a bit better on the ball but managed to get the goal we needed and can use that as motivation now.”