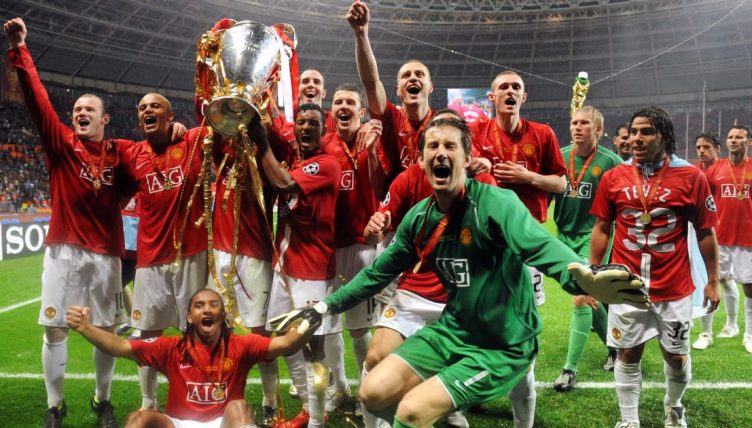 The Premier League is often said to be the best league in the world and English sides have been dominating European competitions in recent years.

An English side is guaranteed to win the Champions League this season, with Manchester City set to face Chelsea in the final in Istanbul.

We’ve taken a look at the four times that two English sides have faced each other in a European final.

The 1971-72 season saw the Inter-Cities Fairs Cup evolve into the UEFA Cup, and Tottenham came up against Wolves in the first all-English European final.

“It was strange for our wives because our wives were promised an all-expenses-paid away trip to the final if we ever reached it,” former Tottenham striker Martin Chivers told the official UEFA website in 2015.

“So they started dreaming of Madrid, Paris and Rome; and where did we finish? They weren’t enamoured to go to Wolverhampton, no.”

During the first leg at Molineaux, Spurs took the lead through Chivers’ header in the 57th minute before Jim McCalliog equalised for the hosts.

Chivers then produced another moment of magic three minutes from time, scoring with an unstoppable shot from 25 yards to give Spurs a 2-1 victory to take back to White Hart Lane.

Alan Mullery extended Spurs’ lead in the second leg but Dave Wagstaffe then scored a sensational equaliser on the night to breathe fresh life into the final.

Despite dominating the second half, Wolves couldn’t get the second goal at White Hart Lane and Spurs added the UEFA Cup to a cabinet that already included the 1963 European Cup Winners’ Cup.

On This Day in 1972, Tottenham became the first British club to win two different European trophies after winning the UEFA Cup.

After Manchester United pipped Chelsea to the Premier League title in 2007-08, the two sides then played against each other in the Champions League final in Moscow a few days later.

“It was tough, it was really tough, because at the end of the day again there were so many bragging rights to be had between us,” Rio Ferdinand told BT Sport in 2020.

“And listen, if we beat someone from Italy, Spain or Germany, you don’t see them really until you play them in a year or two down the line.

“Whereas if you lose to Chelsea in Moscow, that’s folklore, that’s history – that’s there every time you go to their stadium, twice a year if not more, and from the fans that you see.”

Cristiano Ronaldo powered home a header to claim his 42nd goal of an incredible season, but Petr Cech somehow denied United a second.

The Blues eventually grew into the game. Frank Lampard equalised on the stroke of half time, poking home after Michael Essien’s deflected strike fell into his path.

Lampard and Didier Drogba both saw efforts hit the woodwork before the latter was sent off in extra time for slapping Nemanja Vidic.

The final went to a penalty shootout and Ronaldo’s attempt was saved by Cech, leaving John Terry and Chelsea one successful penalty away from glory.

But the centre-back slipped and missed before Edwin van der Sar saved Nicolas Anelka’s penalty in sudden death to secure the Double for United.

Having lost the 2008 Champions League final, Chelsea responded by winning the competition in 2012 and then the Europa League in 2013.

The Blues reached their second Europa League final in 2019 and came up against London rivals Arsenal in the showpiece in Azerbaijan.

Former Arsenal striker Olivier Giroud came back to haunt his former club, breaking the deadlock with a powerful near-post header that zipped past Petr Cech.

Pedro doubled their lead on the hour mark before Eden Hazard marked his final Chelsea appearance with a brace against the Gunners.

Substitute Alex Iwobi had given Arsenal fleeting hope with a brilliant long-range strike but it proved to be nothing more than a consolation.

Chelsea’s victory saw Maurizio Sarri win his first trophy in management, also ensuring that the Gunners missed out on Champions League football in 2019-20.

“It was an improvement going from Arsenal to Chelsea and I knew I would have the opportunity to win some more trophies,” Giroud told Chelsea’s official website in May 2019.

“To win this Europa League one year after winning the World Cup is great for me. I’m a Blue, a proper Blue. It’s a new chapter of my career and it was very special to score. I am so proud of this team.”

The Reds wanted to banish the disappointment of their defeat to Real Madrid in the 2018 final, while Spurs were making their first-ever appearance in a Champions League final.

Jurgen Klopp’s side took the lead inside the opening two minutes when Moussa Sissoko was contentiously punished for handball and Mohamed Salah made no mistake from the penalty spot.

The final rarely touched the heights of the entertaining semi-finals, in which both sides produced stunning comebacks.

Divock Origi fired past Hugo Lloris with three minutes left and Liverpool were crowned European champions for a sixth time.

“It was just the most special moment to hear that final whistle go, to know that all of the hard work and everything that we have done together in the past however many years, we actually got over the line and managed to win one of the greatest trophies ever,” Jordan Henderson told Liverpool’s official website in 2020.

“It was everything I dreamt of and more really,”