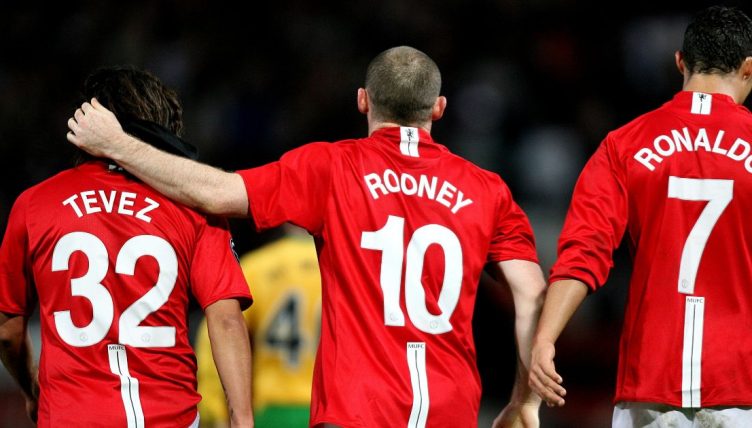 Winning the Champions League and Premier League means the 2007-08 season will go down as one of Manchester United‘s greatest ever campaigns, and much of that success was down to their front three of Wayne Rooney, Cristiano Ronaldo and Carlos Tevez.

Tevez was in his first season at Old Trafford after arriving from West Ham and instantly clicked with Ronaldo and Rooney as United were only a Sylvain Distin block away from winning a second Treble.

Despite going out of the FA Cup, however, United were brilliant in both the Premier League and Champions League.

They won 27 of their 38 league games, racking up 87 points and beating a very strong Chelsea outfit to the title.

On the European stage, they’d again pip the same opponents to the post. After a 1-1 draw in normal and extra time, United won a penalty shootout at the Luzhniki Stadium in Moscow as John Terry famously slipped and missed his spot-kick.

While the whole team was strong, it was the front three who were the real inspiration that season.

In December 2021, former Aston Villa striker Gabby Agbonlahor told of how they would strike fear into opponents.

On talkSPORT, he said: “Luckily we got a result against them at Old Trafford and won, but most times that we played against them we got battered. Going forward [was their strength].

“On their day, Tevez, Rooney and Ronaldo. Arguably, for me, they could be the best front three to have played here in the Premier League. They were unstoppable.”

We’ve taken a look at some of the stats behind that attacking trio’s campaign, while the video of all their goals at the bottom is definitely worth a watch.

– The three players made a combined 140 appearances in all competitions for Manchester United in 2007-08, contributing 79 goals and 29 assists.

– As a result, those three players scored 71.8% of United’s goals that term.

– With 42 goals and eight assists in 49 appearances, Ronaldo averaged a goal or assist every 83.1 minutes.

– Combining their records, they averaged a goal or assist every 102.5 minutes.

– The trio scored a combined 57 goals in the Premier League, more than 14 of the 19 remaining teams in the competition. That includes Everton, who finished fifth.

– Only one player has ever bettered Ronaldo’s 31 goals in a 38-game Premier League season. Mo Salah scored 32 for Liverpool in 2017-18, albeit at a lower goals-per-game ratio.

– They also scored all but one of United’s goals in the knockout stage of the Champions League as they went on to beat Chelsea in the final, Ronaldo getting United’s only goal in normal time in that final.